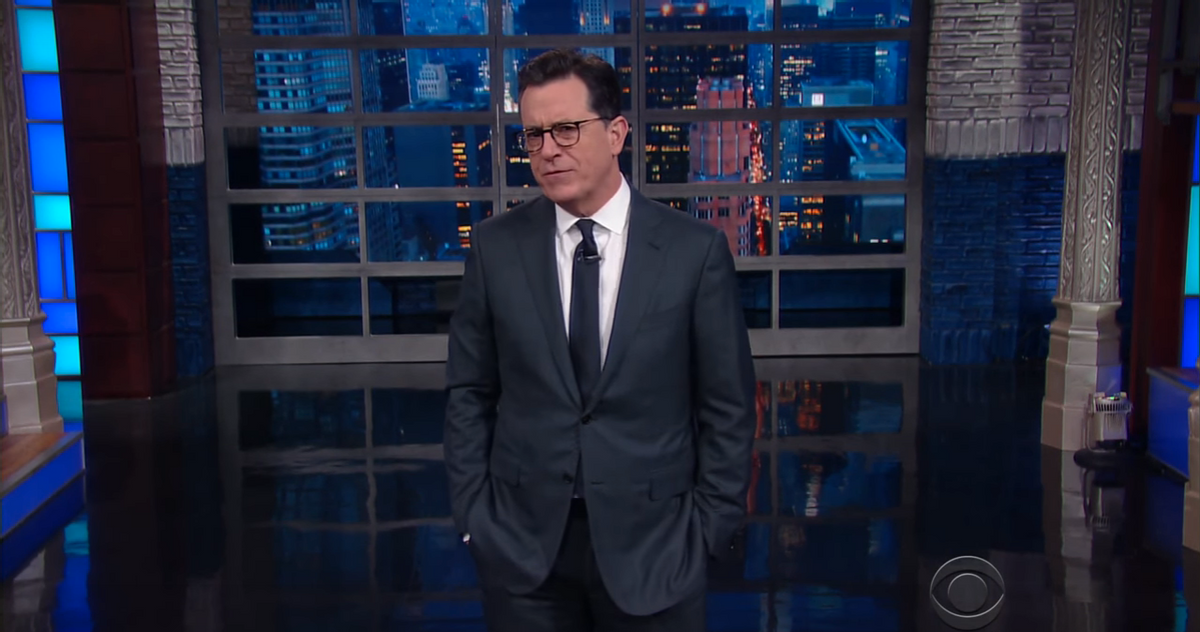 Before Stephen Colbert joked about Kellyanne Conway plugging Ivanka Trump's clothing line on national television, "The Late Show" host began Thursday's opening monologue talking about how things have changed in 2017—especially in regards to how the country reacts to harsh snowstorms.

"Washington, D.C. got a little dusting today, not much, just a little dusting. Donald Trump was out on the White House lawn anyway making a snow man," Colbert joked. "And because it was white, he appointed it to his Cabinet."

The late-night star, who's total viewers last week topped Jimmy Fallon's "Tonight Show" for the first time in a year and a half, noticed that the no. 1 trending topic on Twitter Thursday was hashtag #Snowstorm. This was a let down for Colbert, who appreciated the hashtags of the past, like #Snowmaggedon and #Snowpocalypse.

"We need something for 2017," Colbert said. "It's so obvious: hashtag #Flakenews"

"Speaking of Donald Trump," the comedian expertly segue-wayed, turning to the president's feud with Nordstrom for dropping his daughter Ivanka Trump's clothing line. The latest development between the department store chain and Trump came yesterday when Conway told viewers of "Fox and Friends" to buy products from the Ivanka Trump brand.

"Don't you think it should be against the rules for a White House employee to show products? Funny story, it is," Colbert said after showing the clip. "There are these vague kind of rules called laws."

Colbert cited a law that prohibits White House employees from endorsing any products for the private gain of friends or relatives.

"Very important law," Colbert said. "It's been on the books for a long time. It was written after the 1882 White House endorsement of Chester A. Arthur's Mutton Chop Bangles."

Colbert was also having a difficult time understanding what kind of "counseling," to quote the phrase White House Press Secretary Sean Spicer, that Conway received. He feared that it may have been a euphemism for something more nefarious.

"You won't be seeing Kellyanne anymore. She's counseling with the fishes," Colbert said.