Nothing is like the tension of a passport that is hated 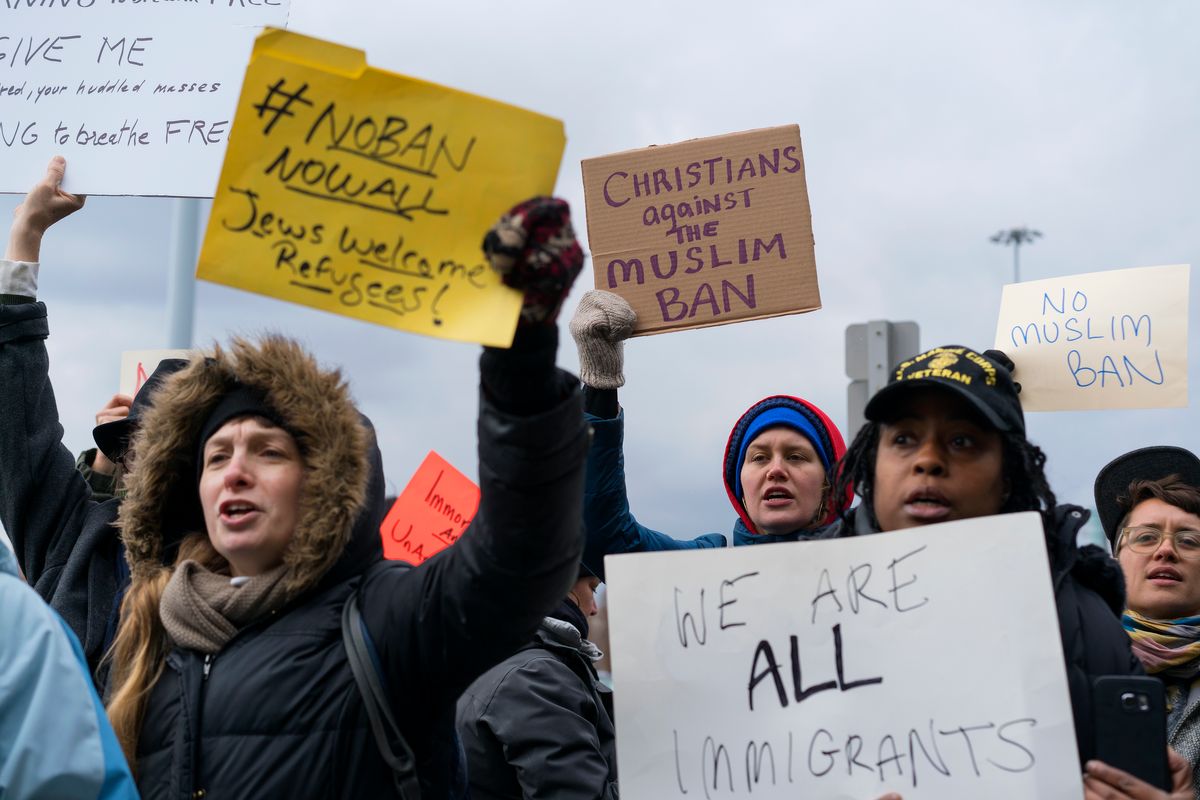 We are grateful to the office of Senator Kamala Harris (D-Calif.), as well as Julie Rodriguez, Katherine Reisner and Daniel Chen, for their help with this case.

Nothing is like the tension of a passport that is hated—this one from Syria. Inside the passport is a sticker from the U.S. Department of Homeland Security. In bureaucratic language, it says, welcome to the United States. Everything about it suggests finality. The colors, the texture, the expensive look of this little instrument of statecraft. How much effort it takes to get this sticker! How many forms to be filled out, how many interviews, how many questions.

Your country vanishes before your eyes, its cities crumble before the horrid energy of armaments. Your modest expectations dissolve. You were a geologist, a respectable but ordinary job. You worked for the oil industry. You have few politics. You wanted a decent life. You are a good man.

You stand in line, waiting. The official in Istanbul airport says, sorry. The Americans don’t want you anymore. They hate your passport.

You step aside. You weep. Your wife is in America. She received asylum last year. Your son is there. He is two years old. They live in Long Beach, California. You wonder, why is it called Long Beach? Does it have a long beach? Or is Long the name of a distinguished person? These are the kinds of thoughts you have. You don’t want to think of anything else. You want to hide inside a tunnel, your emotions bottled up, dissolving your hopes like acid on chalk.

Your name is Nael Ziano. You have a DHS stamp in your passport. Today is January 29. You did not know that U.S. President Donald Trump would sign an executive order that would dig a deep moat between your desires to see your family and their longing to have you with them. A Turkish television crew catches your tears. You are not ashamed to cry. You have spent the past few years in Gaziantep, Turkey, working with other Syrian refugees for the International Organization of Migration. You were their lifeline. Now you are your own.

Courts from Brooklyn to Boston offer rulings on the executive order. These are haphazard decisions. Some agree with the president. Others disagree. There is no harmony. No one knows what this means. Everyone is confused. U.S. Customs and Border Protection and the Department of Homeland Security have no clear guidelines. There are seven countries on the list. Your dismembered, bleeding country is there too. Your passport is hated. The moat gets deeper.

You met your wife at the University of Damascus. She studied chemistry. You loved rocks. And you loved cars. Anything with wheels. Anything that moves. It is a funny thing, to like rocks—which move so slowly—and cars, which move so much faster. But now, at Istanbul airport, you want to move. But you are stuck. The pace is glacial. Your son loves cars, too. He likes to play with buses and cars. He wants you to be in a car. He wants to show you the rocks he has found in Long Beach.

Protests at American airports gives you hope. You see people, thousands of them, shouting, "Let them in." You realize that you are one of "them." They want you to come in. You want to hug your family. They want you to hug your family. Your friends, like blind mice, rush here and there to get someone to take your case seriously. "Let them in," but "them" is made of many—students from Iran, mothers from Iraq, a doctor from Libya, a geologist from Syria. Ibtisam Mahmoo Hussein (Iraqi), who lives in Oman, cannot visit her 91-year-old mother in a Las Vegas hospital. Samira Asgari (Iran) cannot take up her postdoctoral fellowship at Harvard Medical School. A hundred thousand visas were dissolved in Trump’s whims.

Your friends find the last human beings in the U.S. political system. They listen carefully. They see that there is real injustice here. You went through the legal channels, faced all the vetting and then—because of time—fell into a trench. You were reduced to your passport, and since it is hated, you were hated. One U.S. agency confounds another. This is chaos. Trump is not draining the swamp, he is muddying the waters.

You try to board this flight and then that. Turkish Airlines to Los Angeles and Lufthansa to Boston. But nothing works. You are trapped. Your home is with your family. You want to drive to them. You want the borders to dissolve and the seas to part. But you are too tired for that. Moses had god on his side. You have your friends. But they are not god.

The media calls. Journalists speak with great sympathy. They can feel your authentic pain. You are not pretending. But the media cannot part the sea. They are also tired. In all the chaos of the Trump days, they are disoriented. They can only report things in bursts. This happened. Then this happened. Then that happened. People are tired. Before they can discuss the first outrage, three more have happened. They will forget you soon. You are getting smaller and smaller. It is exhaustion, surely, but also amnesia. No one will make a film about your tragedy.

Your name is Nael Ziano. You were born in 1984. You have a Syrian passport. It has a stamp from the U.S. Department of Homeland Security. You want to live with your wife and son in Long Beach, California. You have simple desires. But there is a moat that divides you. You have so little strength.

Suddenly, a federal judge offers a verdict. This judge, James Robart, had volunteered for refugees before he sat on the bench. Community service does deepen compassion. Trump maligns him on Twitter. The judge does not care. He does not answer to the president. Your flight leaves in half an hour. You have already been told you cannot board. You are distraught.

The U.S. border patrol tells the airlines to let you board. You board. It is unimaginable. The plane flies over the Mediterranean Sea. You look down. You see a speck in the water. You wonder if it is a dinghy. Already this year about 300 migrants, fleeing war and starvation, have died in those waters. Last year, 5,000 people—people like you—perished there.