Ivanka goes out of style: More women are refusing to buy what she's selling 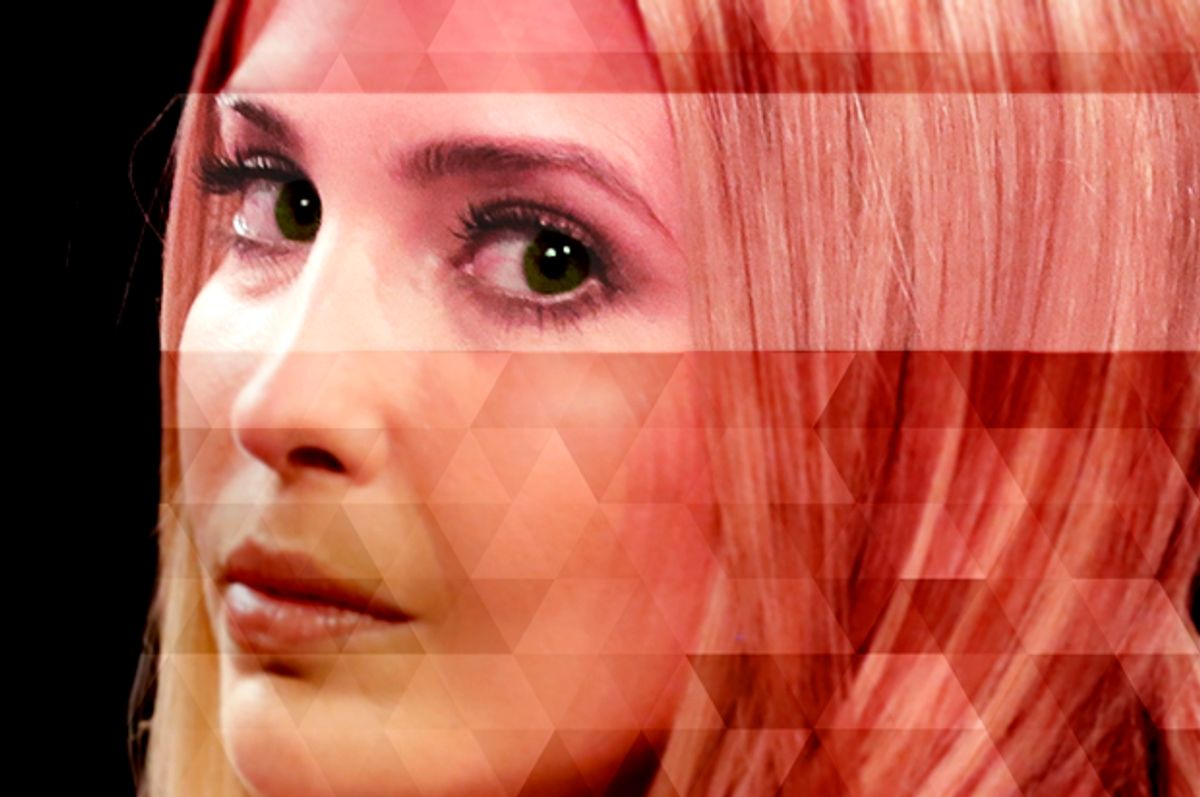 Ivanka Trump is not having a great February.

Despite scrambling to the press to take credit for the scuttling of a barbarous anti-LGBT executive order that had been floating around President Donald Trump’s offices, waiting for just the right devastating smirk from Anderson Cooper to find a hospitable berth in the president’s damaged mind, Ivanka’s personal and professional brand took a major hit when Nordstrom announced it would not continue to carry her apparel line. The anti-Trump boycott movement Grab Your Wallet took credit, and Nordstrom levied the only sick burn a Trump can truly feel: “Low sales.”

Having your allegedly prestigious brand dumped by Nordstrom and, as is now the case for her jewelry line, Neiman Marcus, is not good for a woman of Ivanka’s stature. But — for now — she’s still stocked in Bloomingdale’s and Macy’s and Lord and Taylor, perfectly respectable runners-up, as well as Amazon and its subsidiary Zappos. She could keep making money off her sensible flats for years to come. But discount marts T.J. Maxx and Marshall’s ordering their employees to chuck her wares into the gen pop racks? That’s a flat rejection from a safety sorority. And when Belk, a Southern department store chain that could not be more synonymous with Red State Hair, 86-ed the Ivanka line, things really got real in the land of lady-business wear. Sad!

There’s no such thing as divorcing your politics from your consumption — every rural American who saw their Main Street devoured by a Walmart knows this. The only thing I know about the Woolworth’s brand is that four African-American college kids in ties sat down at its lunch counter in Greensboro, North Carolina, in 1960 and demanded their humanity be recognized in the only way a capitalist system can and will. That lunch counter sit-in spawned a wave of similar ones across the South, and associated boycotts cost the company about $1.6 million in today’s dollars. The desegregation of lunch counters followed. In America, money talks. (Unfortunately, it also tweets in all-caps.)

That women might think twice about buying an Ivanka outfit right now is not surprising. I once recoiled physically from a pair of shoes because they were “designed” by a celebrity whose image I did not see aligning with my own, a decision with a mere $79.95 and my own dumb pride, not the tacit approval of an authoritarian regime, hanging in its balance. Ivanka’s lifestyle brand, designed to be so non-controversial and non-threatening that it might as well not even exist, has now become synonymous with an administration seemingly hell-bent on discriminating against our most vulnerable, helping sick people die faster, and maybe starting World War III before anyone manages to change the password on the president’s phone. Who wants to cop to wearing that look?

Trumpsters are fighting back online, but few of the Ivanka defenders appear to be legitimately dedicated customers, and not only because they’re secretly teen boys from Macedonia. Ivanka has a problem because no there there to defend — her designs lack distinction. As long as Banana Republic doesn’t hire Sean Spicer as its spokesmodel, cubicle-crawling America will be able to clothe itself for the work week if her line disappears tomorrow. Ivanka’s wearables are economically vulnerable because they are needed by none, and now coveted by few.

Take the Ivanka Trump Soho Solutions Work Tote with Battery Charging Pack. It comes in three colors of leather; it’s fine. Looking at one online, it appears to be polished, professional and functional, and if the stitching is decent and the hardware can stand up to a year’s worth of weekday wear, it’s not a bad buy. It’s also utterly generic. This bag says nothing about its owner except “I want people in the office to stop mistaking me for an intern.” Say what you want about Kellyanne Conway’s bonkers style, but at least she has some.

Up until now, this has been the core strength of Ivanka Trump™ — and I don’t just mean the business strategy that makes her Hettie heels indistinguishable from every other knock-off Aquazzura at the mall. While Daddy Trump received his rage-love injections on the Cheeto Circus Rally Circuit, Ivanka’s job was to act as a blank canvas — or a blush crepe sheath, at least — upon which the female and non-caveman electorate could project their last-ditch hopes for reasonable human leadership. What Ivanka and her father likely didn’t bank on was that her utility to Daddy’s more reluctant supporters — the superficial proof that he hadn’t screwed up every last thing he ever touched in his life — was dependent on her continuing to shine professionally and personally through the storm of excrement swirling around his Oval Office.

The shit has hit the proverbial cap-sleeved blouse now, and #WomenWhoWork are apparently not having it. What Ivanka must realize is that she isn’t really selling floral knit shells and A-line dresses anymore, at least not to the #BuyIvanka crowd. She’s selling them a proxy to her father, and they’re supporting her with a MAGA chorus of janky memes, not shoe receipts.

The funny thing about products designed to appeal to everyone is that they are either bulletproof, by virtue of defining or redefining the standard — Starbucks, Coca-Cola, Target, Netflix, Budweiser, Taylor Swift — or they remain third-tier and if they disappear, nobody really cares or notices. You can’t convince Americans to boycott things they love without a strong reason, and you can’t make them be loyal consumers of crap they don't want. The proof is in the latte foam: All of those brands I just mentioned, with the exception of Ms. Swift, have been the targets of recent conservative boycott threats.

No Jesus on the cups? No guns in the store? Hiring refugees? #PourOutStarbucks! Allowing people to choose their own restrooms? #FlushTarget! A show called “Dear White People?” #CancelNetflix! A Super Bowl commercial celebrating many languages and ethnicities? #SiegPepsi!

Has Coke apologized to Nazis? Are Starbucks employees trained to bless your Glock? Did Target set aside special potties “For Ted Cruz Only?” Not exactly. Forget the pointless "Hamilton" boycott — it's not a boycott if you just can't get tickets — the day a critical mass of suburban white people skip their Starbucks fixes to make a rhetorical point about things that have very little bearing on their overall health and happiness is the day that old guys in Make America Great Again hats say “no thanks” to a cold Bud because the company ran an ad celebrating a German dude's financial success. Posturing online is one thing, but Macedonian teens run on Fanta, that “Iron Fist” trailer looks sick, and female Republicans in the Nordstrom demographic would probably rather vote for Hillary Clinton than cut up their charge cards forever over a wrap dress that looks like every other wrap dress on the racks. Ivanka 0, American Women emoji-100.

As my colleague D. Watkins might say, congratulations, Ivanka, you played yourself. Humans might gravitate to material success and power, but they have no motivation to fight — or in the case of Americans, even mildly inconvenience themselves — for something that has no center. Ivanka believes in her own exceptionalism to the point of thinking that the actions of her father's administration wouldn't tarnish her, but an influential subset of American consumer now sees through the tasteful fabrics which don't quite disguise the ugly reality. When you lie down with dogs, Ivanka, don't be surprised when their fleas stick around.