Milo's free speech makes big bucks: Students have the right to push back when universities promote his worldview 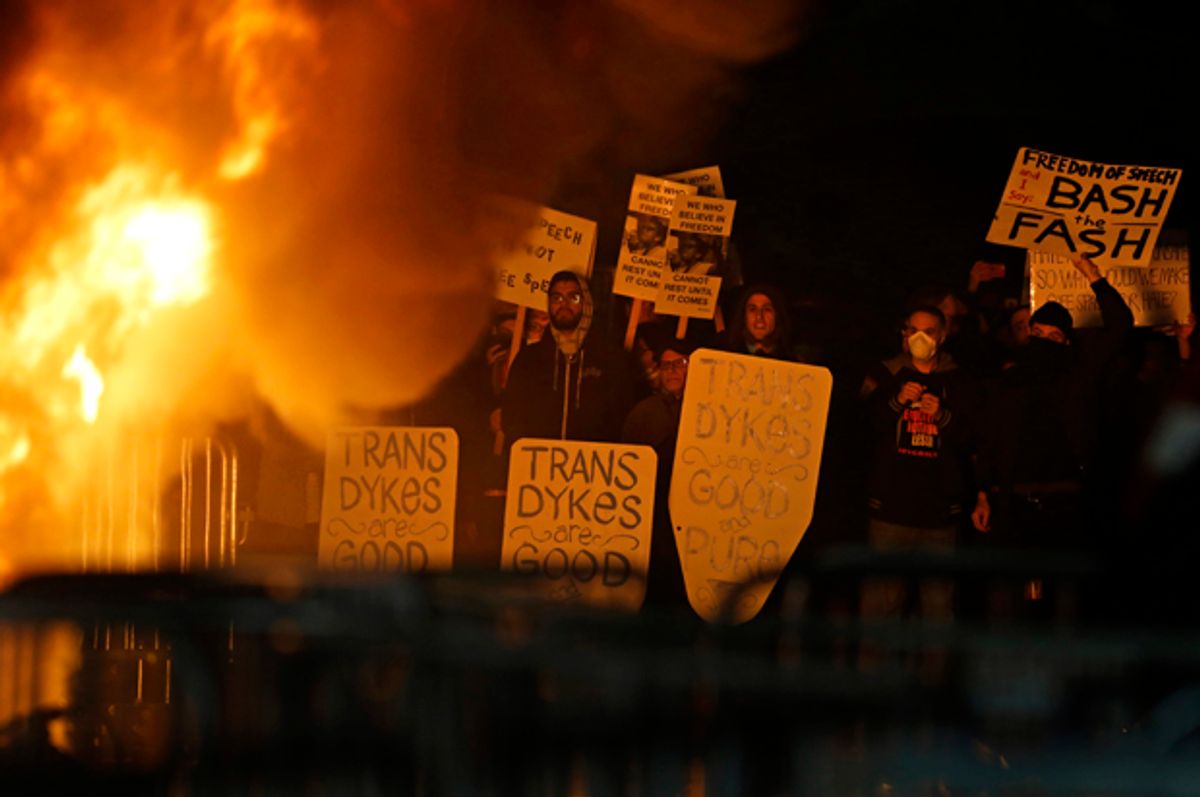 Protestors watch a fire on Sproul Plaza during a rally against the scheduled speaking appearance by Breitbart News editor Milo Yiannopoulos on the University of California at Berkeley campus on Wednesday, Feb. 1, 2017 (AP/Ben Margot)
--

The New York Times recently profiled Hillsdale College in Michigan as an intellectual and cultural home for conservatives in academia. Statues of Ronald Reagan and Margaret Thatcher decorate the campus, while speakers from the National Review regale students with heroic tales of writing reactionary op-eds under the supervision of Jonah Goldberg.

Endless entertainment would result from an obnoxious left-wing agitator booking a speech at Hillsdale and describing in detail how he would like to defecate on Reagan’s tomb while wearing an American flag t-shirt. The speaker could perform his lecture without cost to the conservative college, because the publication for which he writes about his hatred for evangelical Christians and stay-at-home mothers would cover all expenses, as long as they could market their editorial vision and brand name as part of the event.

If the student body and faculty of Hillsdale organized a protest to prevent their academic community from providing a promotional venue for the speaker and his “alt-left” platform, would they open themselves up to accusations of censorship and hostility toward free speech?

Whenever Milo Yiannopoulos, or some other right-wing shock jock, faces opposition to his juvenile act of misogyny as entertainment, cynical conservatives and “serious” liberals betray a fundamental incomprehension of free speech. Americans enjoy the liberty of free expression, and protection from governmental prosecution should they make remarks that violate social norms or communal standards. They do not have a right to monetize their penchant for imbecility with university-sponsored forums.

Yiannopoulos attempted to land his traveling shitshow at the University of California, Berkeley, but was unable to pollute the atmosphere, because large protests had grown prohibitively volatile. A few poorly behaved demonstrators vandalized campus buildings, and upheld the cliché of every riot by setting something on fire, an experience I regret not having during my undergraduate years.

Most pundits on television reacted within the acceptable boundaries of discourse. Melodramatic right-wingers, snowflakes that they are, screamed about the left’s “war on free speech,” while progressives condemned property destruction, but argued that speech is transactional and dialogic. If Yiannopoulos has the right to speak at a university, the obvious point follows, students have a right to articulate and demonstrate their opposition. Elementary logic, soon illegal under executive order, is always up for debate on cable television.

Along with irrationality, the other ubiquitous presence on political talk shows is money. Pundits, especially those visible on nightly TV, are highly paid. Typically, they like to act as if they are acting according to the sole motivators of altruism and ideology when they comment on controversies like Yiannopoulos’ aborted appearance at Berkeley, but they are intimately aware of how their speech is not free. It is quite expensive. The same is true for Milo.

In December, Simon & Schuster announced that it signed a book deal with Yiannopoulos for $250,000. The book is called "Dangerous," and Yiannopoulos’ speaking tour is called “Dangerous Faggot.” He can claim that he is simply trying to educate the world with his insightful declarations of homoerotic love for Donald Trump, and his brilliant policy proposals, such as the deportation of overweight citizens, but he is also building his business. He earns a handsome living through provocation. Students, who because of tuition and fees are also consumers, are entirely reasonable in their objection to their college acting as facilitator for Yiannopoulos’ financial reward.

Most campus speakers demand large fees from their hosts, but the “Dangerous Faggot” tour, according to a Chronicle of Higher Education article on the background of his University of Washington appearance, where one protestor was shot, has Breitbart as its benefactor. The “alt-right” website, where Yiannopoulos is an editor, is funding the entire enterprise. In addition to Yiannopoulos’ campus appearances presenting him with lucrative opportunities to pitch his products, they also function as roving advertisements for Breitbart.

In the unlikely event that anyone needs a reminder, Breitbart has a history of anti-Semitic, sexist and racist content. Students are not enemies of the First Amendment if they oppose their university, largely funded through their debt, aiding in the enrichment of a misogynistic and borderline white-nationalist journal of opinion.

Milo Yiannopoulos is not merely a citizen hoping to stand on a corner shouting inanities into a megaphone. Although that is the appropriate place for his childish antics, he is also a businessman aspiring to reap the reward of visibility and credibility. Campus speaking gigs give him both, and to reject his presence is the equivalent of Catholic students protesting the sale of pornography in the Notre Dame bookstore. Both pornography and the obscenity of Yiannopoulos enjoy legal protection, but different communities can determine whether or not to support their moral and monetary advancement.

There is an excellent scene in "The Sopranos" where Tony and New York boss Johnny Sacrimoni are having an acrimonious conversation about the feud between the New Jersey and Brooklyn crime families and the financial losses resulting from a failure of consensus. A continual source of difficulty is Little Carmine, the idiotic son of former New York boss Carmine Lupertazzi. Tony committed the error of requesting a meeting with Little Carmine, in his Miami home, to discuss his potential intervention. “In large measure, I blame you for all of this bullshit with Little Carmine,” Johnny growls at Tony. “A man of your stature sits down with a schmuck like that. You legitimized him.”

Students and professors who protest against their school and employer lending its prestige to a schmuck like Milo Yiannopoulos are not enemies of free speech. They are defenders against the legitimization of misogyny and bigotry, and protectors against the further destruction of public standards for decent behavior.