Yes, the mainstream media has biases that Trump has exploited — but not the ones he complains about in public 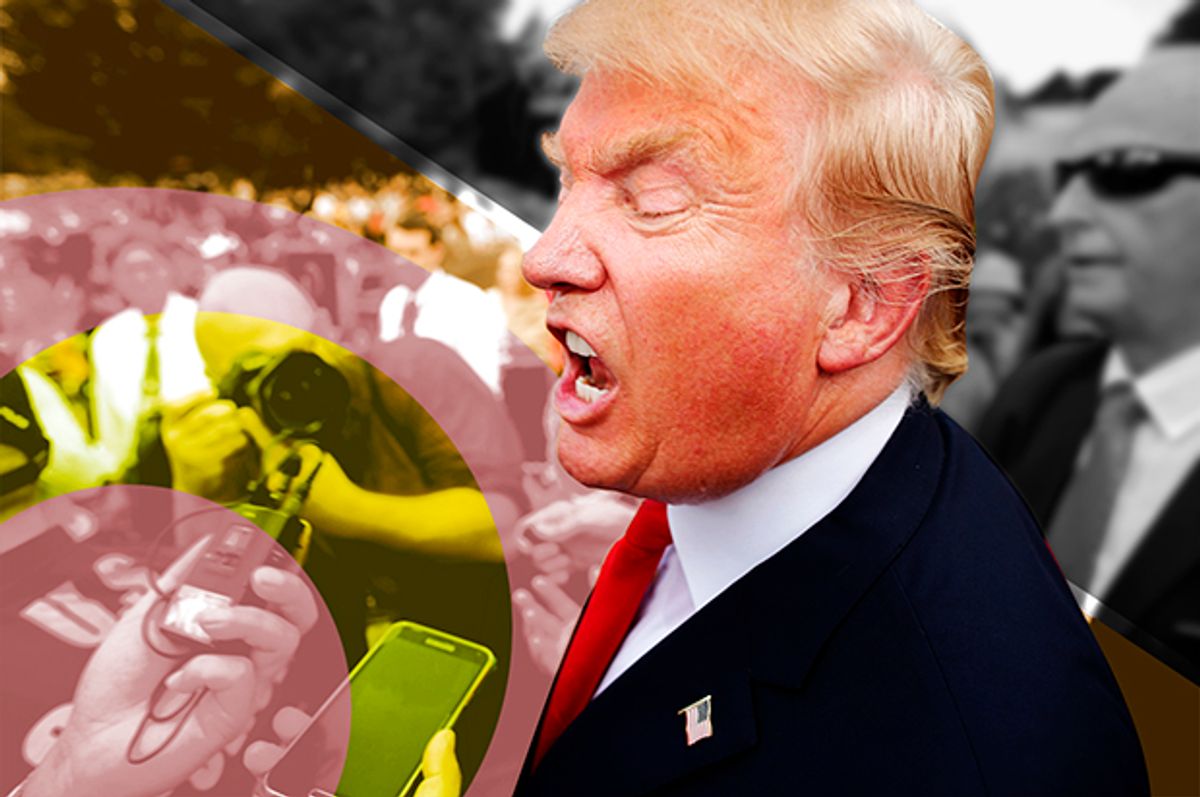 Facebook
Twitter
Reddit
Email
view in app
On Monday, Donald Trump's war on the media took a ridiculous turn -- even by Trump standards -- when the petulant president speculated in a speech to the U.S. Central Command that the press was deliberately trying to cover up reports of Islamic terrorism.

“It’s gotten to a point where it’s not even being reported,” said Trump, who seems incapable of making a speech without mentioning the “dishonest press” and touting the latest conspiracy theory he read on InfoWars.com. “And in many cases the very, very dishonest press doesn’t want to report it. They have their reasons, and you understand that.”

This claim no doubt came as a surprise to anyone who has watched cable news in his or her life and has seen how extensively the mass media reports Islamic terrorist attacks when they occur in the West — which they rarely do. Trump, who is reportedly an avid watcher of cable news, either has a very bad memory or is fibbing once again to take a shot at the media and push his Islamophobic agenda. As Benjamin H. Friedman, a research fellow at the libertarian think tank Cato Institute, remarked to PolitiFact (which ruled Trump’s statement “pants on fire”):

Due to its sensational nature, [Islamic terrorism is] over-reported compared to other forms of violence and causes of death that kill more people. Media has a strong incentive to focus on scary political violence -- the aphorism ‘if it bleeds, it leads’ is a sound business principle in news media, especially television.

One would expect Trump — a reality TV star who clearly understands the importance of ratings — to have a pretty good idea how the mass media works in America. In public, however, the president espouses a simplistic right-wing view of the press, portraying it as an all-powerful monolith that is always out to unfairly smear him and advance a sinister left-wing agenda. (Trump may believe this to a degree, but he has clearly been playing on the right’s ingrained distrust and paranoia.)

And thus, in Trump’s mind, the press is the “opposition party,” as his chief strategist Steve Bannon put it last month. It deliberately underreports Islamic terrorist attacks while overreporting or manufacturing bad press, such as mass protests, his slipping approval rating or public opinion polls that disapprove of his agenda.

In reality, the mainstream media, or the “corporate media,” is driven primarily by business rationale and the profit motive, not some left-wing or liberal agenda. This is evidenced by the media’s institutional structure, and the startling fact that 90 percent of the media today is owned and controlled by just six multinational corporations — compared to 50 different companies in 1983. These six corporations function, like all other corporations, to make profit. Journalists working for those companies report to their managers and executives, who report to presidents and CEOs, who report to owners or shareholders.

It was this business rationale that led the media to excessively cover Trump during the primaries, and prompted Les Moonves, the CEO of CBS, to remark in early 2016 that Trump’s campaign “may not be good for America, but it’s damn good for CBS.”

A Harvard University study conducted last June supported this reality, and found that “Trump got the most coverage of any candidate running on either side” during the primaries, and that the vast majority of it “was favorable in tone.” On the other hand, Sen. Bernie Sanders, who wasn’t well known when he began his campaign (and therefore wasn’t a big ratings draw), received the smallest amount of coverage during the first half of the primaries — though coverage did increase during the latter half of his campaign, as he became an increasingly popular figure.

Meanwhile, Hillary Clinton received the “least favorable coverage of any Democratic or Republican candidate,” and during the first half of her campaign there were “three negative reports about her for every positive one.” That was partly because Clinton undeniably came with extensive political baggage, but it also discredits the right-wing narrative that the media was a propaganda machine for Clinton.

Besides reality-TV-style political campaigns, terrorist attacks and other calamities tend to bring in big ratings for news networks, which means Trump has it completely backwards when he claims that those in the media “have their reasons” for underreporting terrorism. In fact, they have every reason to overreport and sensationalize terrorism — which they do. This sensationalism has resulted in a false perception of violence and danger, leaving Americans extremely fearful of terrorism even though they’re more likely to be fatally crushed by furniture than to die in a terrorist attack.

The kind of stories that actually go underreported by the mainstream media are usually the ones that portray corporate capitalism or the American government in an overly bad light, or stories that may alienate clients who spend millions of dollars on advertising. In 2016, some notable stories that received very little mainstream coverage were the Dakota Access Pipeline protests in North Dakota, the nationwide prison strike last fall and the U.S. government’s continued targeted killing program.

It is clear that the mainstream media has some strong biases — but not in the way right-wingers always complain about. Media companies are generally biased toward American interests and the economic system under which they operate. And while there is an obvious liberal bent on social issues such as diversity and LGBT rights (as there is in much of corporate America), there is just as strong a bent toward the right on economic and foreign policy matters.

President Trump’s biggest pet peeve with the mainstream media, however, is not that it is politically biased but that it is biased toward reality (at least on the stories that it chooses to report). Stephen Colbert famously declared back in 2006 that “reality has a well-known liberal bias,” but the comedian could have hardly predicted just how pervasive falsehoods would become in the age of Trump. The new president lives in an alternative reality shaped by his colossal ego and his penchant for conspiracy theories. In less than a month, his new administration has peddled some of the most transparent lies in the history of American politics.

Not surprisingly, this has resulted in a lot of fact-checking and debunking by journalists. When the press does its job and calls out the president or one of his servile staffers for lying, Trump cries about the “dishonest,” “unfair,” “failing liberal media.” Of course, the media’s job is not to be “fair and balanced” when the president of the United States rejects objective truths and regularly embraces conspiracy theories. Climate change, for example, is not an opinion, but a scientific fact; and when someone calls it a “Chinese hoax,” this should be treated as the ludicrous conspiracy theory that it is, not another opinion that deserves fair treatment from the press.

In Noam Chomsky’s classic book on media, “Manufacturing Consent,” the MIT professor describes the American mass media as “effective and powerful ideological institutions that carry out a system-supportive propaganda function by reliance on market forces, internalized assumptions and self-censorship, and without significant overt coercion.” Since this was written nearly 30 years ago, media ownership has become increasingly concentrated, competition for advertising dollars has intensified (mostly due to the Internet) and the dividing line between commentary news and old-fashioned reporting has become increasingly blurred with the invention of cable news and blogging. But Chomsky's thesis remains highly accurate.

There has been no greater myth over the past four decades than that of the liberal or left-wing media, and Trump has benefited from both the myth and the reality. Not only did he receive billions of dollars worth of free publicity from the ratings-obsessed press, but he was able to scapegoat the same press and lie with virtual impunity because so many Americans have stopped trusting the “liberal media” (i.e., the fact-checkers). In a sense, then, the mainstream media has been Trump’s greatest tool — and when the next terrorist attack occurs and the media amplifies it as usual, they will further help the president and his fear-mongering agenda.