How history is made: Over 50 years ago, four young black men decided to order coffee in Greensboro 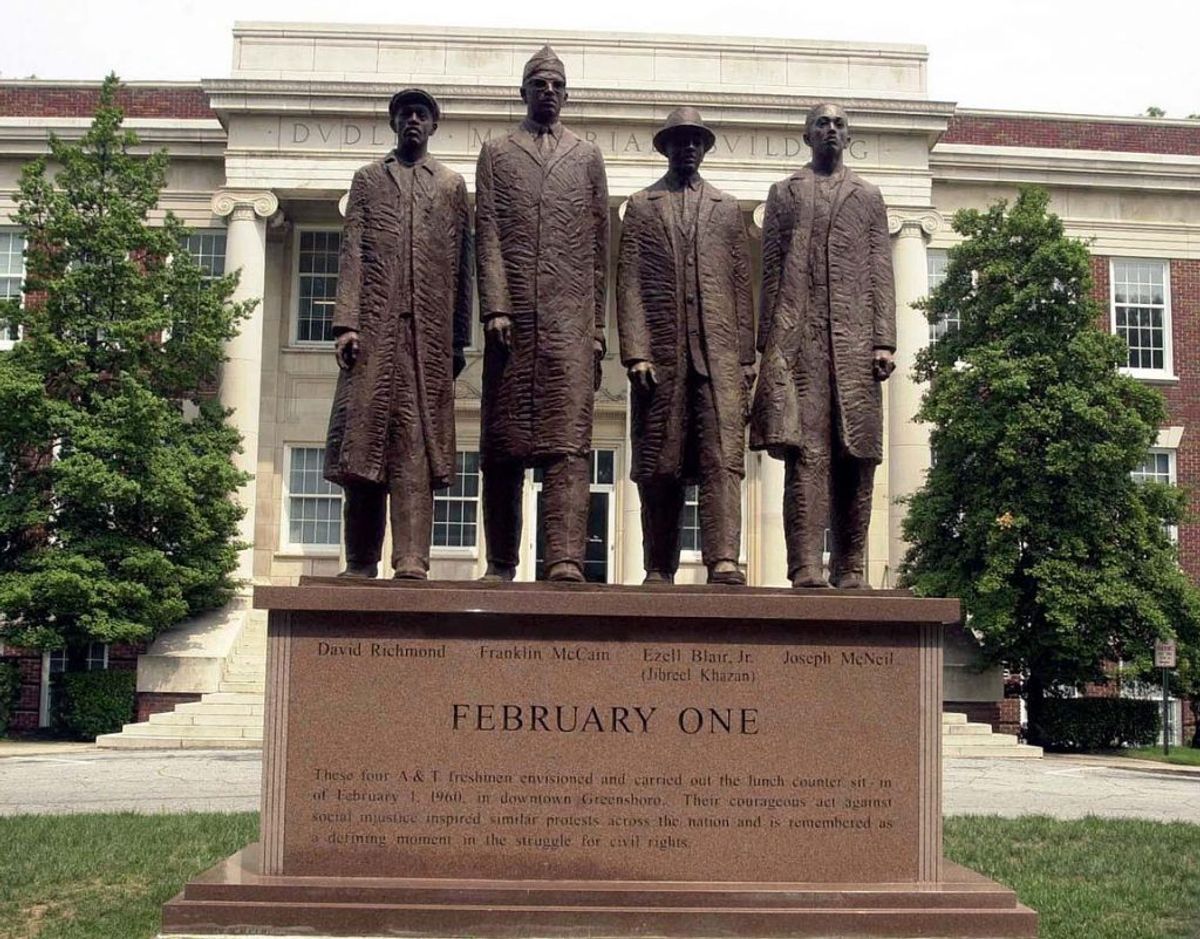 Late in the afternoon of Feb. 1, 1960, four young black men — Ezell Blair Jr., David Richmond, Franklin McCain and Joseph McNeil, all students at North Carolina Agricultural and Technical College in Greensboro — visited the local Woolworth five-and-dime store. They purchased school supplies and toothpaste, and then they sat down at the store’s lunch counter and ordered coffee.

The four students refused to give up their seats until the store closed. The local media soon arrived and reported the sit-in on television and in the newspapers.

The four students returned the next day with more students, and by Feb. 5 about 300 students had joined the protest, generating more media attention. Their action inspired students at other colleges across the South to follow their example. By the end of March sit-ins had spread to 55 cities in 13 states.

Across the South, local white thugs tried to intimidate the sit-in protesters. They pelted them with food or ketchup and tried to provoke fights. But the students remained nonviolent and didn’t fight back.

Rather than arrest the thugs, local police arrested the protesters because what they were doing — resisting Jim Crow laws — was illegal. Over 1,500 students, mostly black but also white, were arrested for trespassing, disorderly conduct or disturbing the peace.

In hundreds of cities across the country, Americans of conscience — led by churches and synagogues, unions and college students — demonstrated their support for the sit-ins by picketing in front of Woolworth stores, urging people to boycott the national chain until it desegregated its Southern lunch counters.

The Greensboro Woolworth ended its policy of segregation a few weeks after the North Carolina A&T students began their protest. Within months, hundreds of other lunch counters, department stores and other retail businesses throughout the South announced plans to serve all customers equally. The sit-ins, the picketing by allies, the consumer boycott and the negative publicity had worked.

Most conservatives and even some liberals — black and white — thought that the student activists were too radical. But their actions galvanized a new wave of civil rights protest.

At the invitation of organizer Ella Baker, over Easter weekend — April 16-18 — several hundred sit-in activists and their allies came to Shaw University, a black college in Raleigh, North Carolina, to discuss how to capitalize on the sit-ins’ growing momentum and publicity.

This gathering became the founding meeting of the Student Nonviolent Coordinating Committee (SNCC). Its growing base of supporters played key roles in the freedom rides, marches and voter registration drives that eventually led Congress to enact the Civil Rights Act of 1964 and the Voting Rights Act of 1965.

Many SNCC activists became key leaders in subsequent battles for social justice. One was Marion Wright Edelman, founder of the Children’s Defense Fund. Another was Congressman John Lewis, who courageously risked his life many times for social justice, but whom Donald Trump, in one of his recent twitter tantrums, criticized as “all talk, no action.”

The struggle continues. This is how people make history.