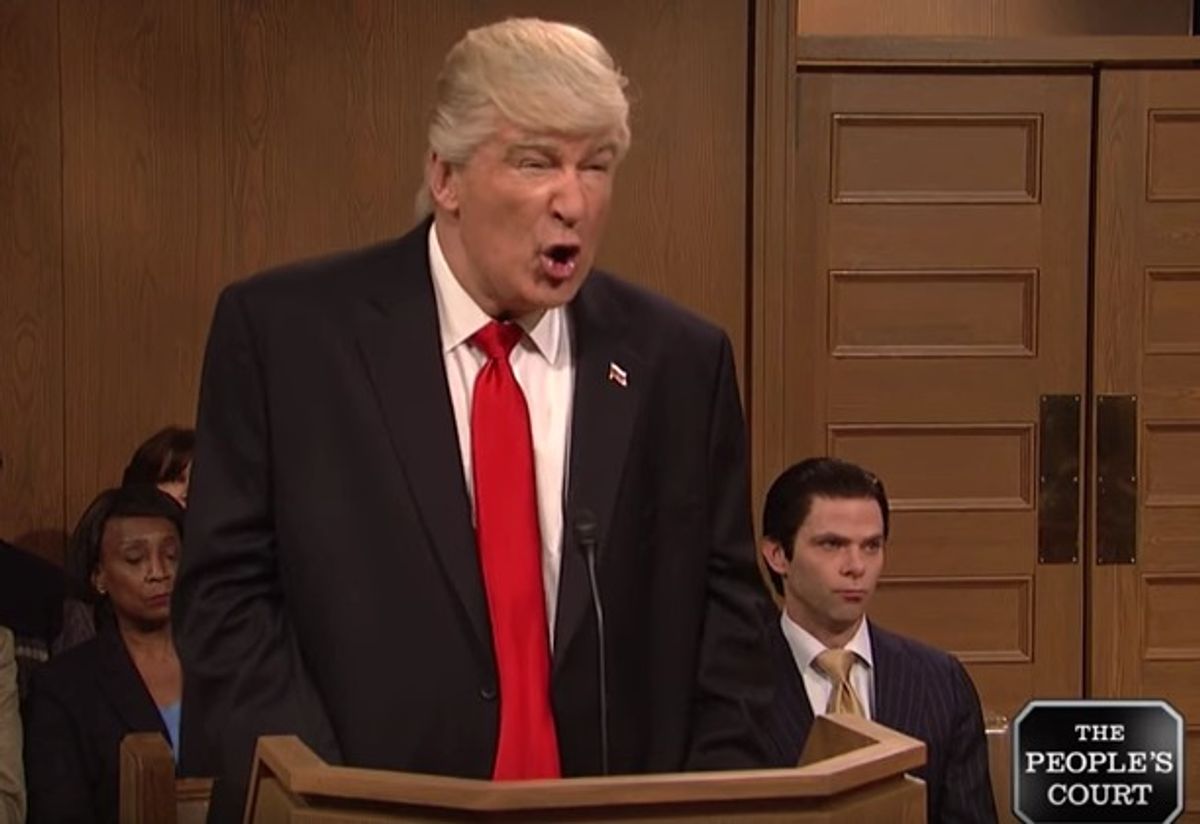 In a skit mocking President Donald Trump's disregard for judicial titles, Alec Baldwin reprised his role as Trump on Saturday night Live last night. Entering the famous television courtroom set of The People's Court, Mr. Trump approached the plaintiff's podium and prepared to defend his maligned and disempowered travel ban.  The screen graphics identified him as "President Donald Trump, suing for: Justice, bigly (SP)".  Then, case defendants entered the courtroom; they were Ninth Circuit Court judges Kyle Mooney, Vanessa Bayer, and Pete Davidson, who were accused of "knowing the Constitution".  President Trump asked in court for the travel ban to be reinstated, and to be reimbursed $725.

"First of all, Mr. Trump, you understand this is a TV court, right?" said Ninth Circuit Court judge Vanessa Bayer.  "That's OK, I'm a TV president," he responded. Then he went on to tell his side of the immigration ban issue.  "OK, judge, lady judge...what do I call you...a flight attendant?" said Trump, to boos from the audience.  Baldwin's caricature of President Trump relies on grotesque facial expressions and explicit misogyny throughout.  Trump wanted to bring in a character witness, who was none other than Vladimir Putin, ably played as ever by a shirtless Beck Bennett.  Putin swaggered to the podium, calling Trump his "little American Happy Meal".  Noting President Trump was a "great friend . . . He'd do anything for you, go against his own country, just to make you happy,"  said Putin.  His closing remarks were,  "We good here? See you at Mar-a-Lago!"

Judge Bayer threw out the case, refusing President Trump's demand of a settlement. "I read the ban," she said. "It seemed rushed, even by my standards, and I read three cases in an hour!" To much applause, Bayer told Trump to slow down his crazy decision-making in the White House. "You're doing too much!" she said. "Give me one day where I don't see something on CNN that scares the hell out of me!"