What I thought was a sushi joint turned out to be a marijuana boutique. It was weird to buy from strangers 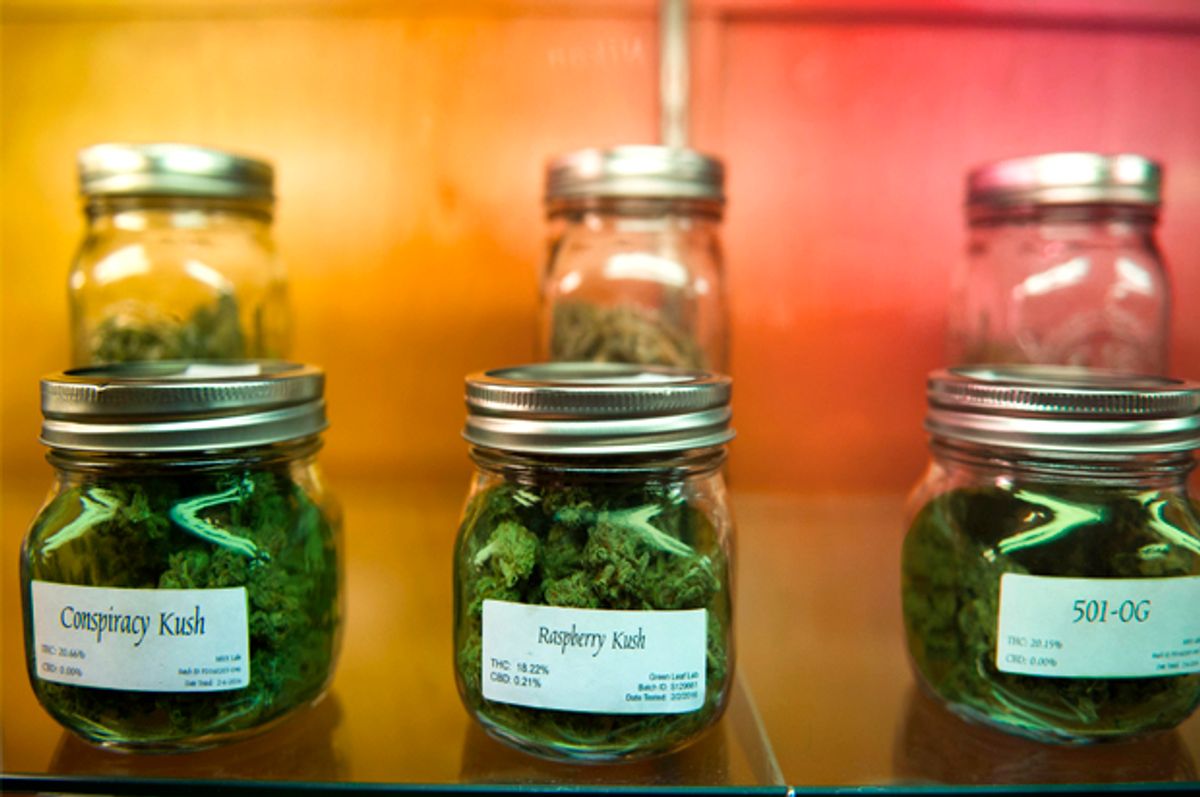 Stomach growling in anticipation of a salmon avocado roll, I pushed open the door to a Bend, Oregon, store called Tokyo Starfish with chime-jangling urgency. I was getting hangry, or maybe hanxious, and needed a snack.

But Tokyo Starfish was not the sushi restaurant I was expecting. There was no bar, no flayed fish, nothing evocative of Japan. Three snowboarders in beanies lounged on midcentury modern furniture while ambient electronica music played. A fourth sat before an iPad at a reclaimed wood counter.

"No, a medicine dispensary."

"It is," smiled the snowboarder. "Would you like to look in back?"

"Nah," I said. "I'm all set." Supplies were running low by NorCal standards, but money, as always, was tight.

I had to look, if only to honor the 16-year-old me who shyly approached people's creepy older brothers stammering, "Uh, I heard that you, could, um, get me some, um —," the college student who knocked on the dorm room doors of the white trustafarians in her Black Studies classes and the Brooklynite who hoarded phone numbers on business cards that said "pet psychic," opened her deadbolted door to strangers on bikes and atrociously overpaid them for eighths that weighed barely two grams.

To future generations of stoners, these tales of life under Pot Prohibition will soon be the equivalent of "I walked five miles to school in the snow." Legalization will make codgers of us all.

"You couldn't always buy it in a store!" we'll be wagging our fingers at "kids today" and the kids of tomorrow. "You couldn't always order it off a menu like you were in a sushi bar! In my day, you had two choices: Let strangers rip you off, or move to northern California!"

I showed the Oregonian with the iPad my California ID, and he opened the door to the future.

The back room was staffed by a team of hotties in hoodies. The reclaimed wood here took the form of floating shelves, on which quart-sized Mason jars were arranged with the precision of an art installation. A woman made eye contact.

"Do you prefer indica or sativa?" asked my personal retail marijuana hoodie-hottie.

"I don't really know," I said. "Given the choice, I like to smoke a mild, active weed. But I'm no Strainmeister."

Mason jars were opened, nugs extracted. This one is lemony, said the hoodie-hottie. This one has berry notes. This one smells like pineapple.

The embarrassment of riches was overwhelming. Weed is going the way of wine, coffee, chocolate and vinyl now: a commodity cultivated for connoisseurs, requiring specialized vocabulary.

The prices weren't bad — at $12.50 a gram, and roughly $37.50 an eighth, with the 25 percent sales tax already built in, legal weed still costs barely half the East Coast prohibition street price of a decade ago. It wasn't free, but it was also — in a store.

After getting it from friends who grew, it was weird to be buying pot from a stranger. The boutique retail of this product will bring it to new customers, but it will also push many of us further from our healer-dealers.

"You just killed the weed man," said the guy at the bar the night my home state of California legalized marijuana, and America elected a fascist.

In the back room of the pot store, I thought of all the weed I had smoked, from the competition-grade buds of the Emerald Triangle down to the schwag I scored in every foreign beach town I visited. I always found it, or it always found me.

How had I known I wanted this drug, or in the parlance of our changing times, needed this medicine? I had always known.

My Baby Boomer parents used to sniff the air in parks and say, "I smell grass," or nod sagely at one another and say, in unison, "Dope." They had left pot back in the '70s, along with their fashion sense, but they gave me cannabinoid receptors in my brain, along with my green eyes, crooked teeth, a big vocabulary and a college education.

I always knew the smell, and it always smelled good to me. As soon as someone offered, I inhaled. When I did, it was like the world went from black-and-white to color, and a knot in my chest untied. After that, I liked to have my own stash.

What had weed done for me? Made me grandiose and helped me to stay present. Dried out my contacts and made me appreciate the beauty of all things. Inspired me, but scattered my thoughts. Eroded my short-term memory, while cementing things like a 10-second rustling of a stand of aspen trees in my long-term one. Made me less afraid to fall while rock climbing, but more reluctant to hike to get to it. Enabled me to spend long stretches of time with my loving but emotionally intense family without having anxiety attacks. Helped me to endure weddings and funerals without worrying too much about whether I'd ever have the former, and when I'd inevitably have the latter. Connected me to my friends, lengthened the duration of our laughter, buried it deeper in our bellies. Nudged me to many sad truths about America. Softened the edges of my psychic and physical discomfort without ruining my teeth, or my life. Increased my fear and loathing of the cops, and theirs of me, but had not gotten me shot, because I am white.

It made me not care as much. I had always cared too much.

Why couldn't I find this precarious balance with yoga, meditation, psychotherapy, raw foods, long hikes, spin class? Conscious partnership, mindful parenting, meaningful nonprofit work? Maybe I could — but you can't buy those things in stores in Oregon. And why should I have to, when so many of my fellow Americans can't seem to get out of bed or fall asleep at night without their own daily dose from Big Pharma?

The hoodie-hottie rang up my purchase. I paid for the weed with a credit card, and carried it out, most surreally, in a brown paper bag with a printed receipt. I shook the nugs from the orange plastic pill bottle with the white childproof lid into a small glass Mason jar.

I was no sick person. This was part of living well.

There were probably rules about whether I could smoke in my car, or in the parking lot of the Whole Foods where I was still seeking sushi, since Tokyo Starfish had delivered a different commodity. Maybe I should have been worried about the icy mountain roads, my perpetually sputtering writing career, my empty bed, my empty womb, the meaning of what was then the nascent presidential candidacy of a sensationalist real estate magnate.

But despite all that was wrong, for a moment I was right with the world, and right with myself. Despite my First World problems, I was enjoying one of my finite number of afternoons here on God's green earth. And in the state of Oregon, that was no crime.

Emily Meg Weinstein Tweets at @emilymweinstein, blogs at superlefty.com, and essays everywhere. She lives on a houseboat in the San Francisco Bay, and travels in her second home, SubyRuby the Devastation Wagon.