The positive portrayal of men from Lena Dunham and female filmmakers 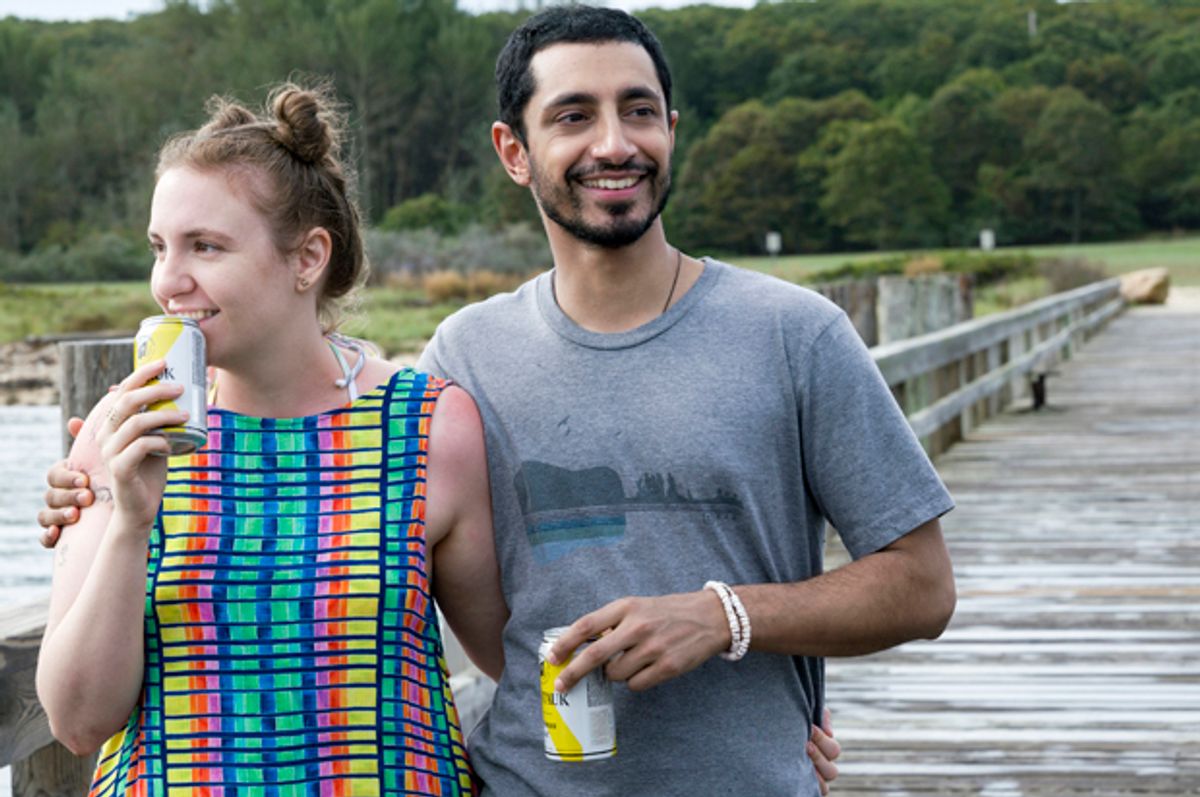 In “Homeward Bound,” the eighth episode of the fifth season of “Girls,” Jessa (Jemima Kirke) and Adam (Adam Driver) are caring for his niece, because his sister flaked and fled. At one point, the baby spits up on Jessa. Freaking, she hands the baby to Adam and disappears into the bathroom:

Jessa: Adam! Where are the towels? You have to help me, it’s dripping all the way down my back and into my butt. Adam! [Reappears in door frame] Why aren’t you helping me?

Adam [calmly holding baby]: You’re an adult. She’s a baby. Why do you need more help than a baby?

Lena Dunham’s HBO series, which debuted on April 15, 2012, and begins its final season on Sunday, Feb. 12, has had its share of detractors. The earliest, loudest complaints were about the show’s lack of racial diversity, but viewers also complained about: the sex (it wasn’t sexy); the rough sex (was it rape?); the body type (we don’t want to fat-shame but c’mon); and the overall sense that the girls of “Girls” weren’t, you know, likable. They weren’t the usual wish-fulfillment fantasy Hollywood gives us. If women everywhere compared themselves to Carrie, Samantha, Charlotte or Miranda of “Sex and the City,” few wanted to think of themselves as a Hannah (Dunham), Marnie (Allison Williams), Jessa or Shoshanna (Zosia Mamet), who are generally entitled, solipsistic, irresponsible and self-deluding. They are college-educated women who need more help than babies.

All of this is fairly well-known. What’s less talked about are the boys of “Girls.”

They started out problematic, too: Charlie (Christopher Abbott) was suffocatingly romantic, Adam frustratingly distant and sexually perverse, Ray (Alex Karpovsky) generally disgusted with the world. An early assessment by Alessandra Stanley in the New York Times toed the feminist line: “The economy fluctuates, neighborhoods blossom or decay, but men never cease to disappoint.”

Then they ceased to disappoint. They matured faster than the girls. Adam, in particular, revealed himself to be a true artist and lover even as he retained something primal and pure about him. He knows what he wants, what he doesn’t, and doesn’t waste time on the second category. You could say the most questionable thing about him is his love for Hannah. In the third-season episode “Dead Inside,” Hannah, following the sudden death of her editor, can only think about the fate of her e-book, and Adam is stunned that she’s so shallow and feels so little. It leads to a discussion in which she says she’d feel “extremely sad” if Adam died. “Extremely sad?” he repeats back. “If you died the world would blur. I wouldn't know what a tree was.” In a show about women, created by a woman, and often written and directed by women, Adam is its most noble character.

This dynamic — irresponsible women/responsible men in stories by women — isn’t specific to “Girls,” by the way. I keep running across it in movies from female filmmakers like Nicole Holofcener, Lynn Shelton and Gillian Robespierre. Their women (Julia Louis-Dreyfuss, Keira Knightly, Jenny Slate) are shallow, flighty, hard to please. The men they gravitate toward (James Gandolfini, Sam Rockwell, Jake Lacy) are steadfast, decent, open-minded. The point of the story is for the woman to grow up enough to realize this. Each time I encountered it, I had to shake my head a little. Wait a minute: We’re the good ones and you suck? It gave me a little Sally Field glow: You like us! You really like us!

I shouldn’t find this surprising but I do. I came of age in the late ’70s, a time of feminist anger and anti-pornography debates, and I always assumed men were the worst. We were lustful shits. I knew I was a lustful shit, and I wasn’t that bad compared to other guys. Women were Other and I assumed better. They were redemptive. That’s what our stories, our mostly white male stories, told us. Give smart feminists the tools of the trade, I assumed, and they would cut us to shreds like Valerie Solanas.

That’s why Margaret Atwood’s novel “Cat’s Eye” was such a revelation. It’s about a painter named Elaine reflecting on her 1940s childhood, where the villains aren’t boys, or her older brother, or the men who might drag girls into bushes; they’re girls, her best friends, led by Cordelia, who pick and pick at her until there’s nothing left; until there’s just a walking shell. It’s a horror story, really. At one point, she thinks about asking her older brother for help:

But tell him what exactly? I have no black eyes, no bloody noses to report: Cordelia does nothing physical. If it was boys, chasing or teasing, he would know what to do, but I don’t suffer from boys in this way. Against girls and their indirectness, their whisperings, he would be helpless.

The irresponsible women/responsible men dynamic makes sense when you think about it for two seconds. No writing is more self-flagellating than diary writing, and in art a lot of this gets transferred onto the main character. Ricky Gervais recently stated that in his work, men are generally boys while women are adults “because,” he says, “it’s sort of true.” Right. To him. He knows himself and his foibles. He assumes women are better. But women know women better. In “Cat’s Eye,” an adult Elaine, back in Toronto, helps a drunk woman on the street but the interaction goes poorly. “I’m a fool, to confuse this with goodness,” she thinks. “I am not good. I know too much to be good. I know myself. I know myself to be vengeful, greedy, secretive and sly.”

Sadly, we don’t hear this voice often enough in our mainstream culture. Hollywood doesn’t let it in — or out. I imagine most of us have seen the numbers on female filmmakers. Every year, Martha M. Lauzen, executive director of the Center for the Study of Women in Television and Film at San Diego State University, crunches them, and every year they’re more or less the same. Last month, for example, she reported that, among the 250 highest-grossing domestic movies of 2016, women made up just 24 percent of producers, 13 percent of screenwriters, and 7 percent of directors — numbers virtually unchanged since 1998 when she began her project.

Arguments for more female filmmakers usually focus on equality and empowerment — women should be able to tell their own stories, young girls should be able to see themselves on the screen — but there’s a more fundamental rationale that gets lost in the shuffle: Allowing 51 percent of the population only 10 percent of the storytelling slots gives us a warped view of the world. This warped view, ironically, may be most detrimental to the victimizer. Women know their own stories, after all. Women see the whole field, while men are missing half of it. Besides, there’s a chance that men may actually come off better in women’s stories. Give male filmmakers actors like Gandolfini and Rockwell and they make them gangsters and psychopaths. In women’s hands, they become life-coaches and mensches.

For these reasons and others (see: 1600 Pennsylvania Avenue), it’s a bad time for “Girls” to be leaving us — but it is time. Six seasons is long. We can only take so many ups and downs, so many breakups and reconciliations, before what was new, fresh and honest seems old and stale. I am curious if the girls of the title will finally mature in this final season. Is that when “Girls” goes away? When women emerge?

If so, it feels like it’s already happening: Shosh’s career is moving forward; ditto Marnie, who, for the moment, is with good-guy Ray. As for Hannah, who could be as cringingly awful and self-centered as a Ricky Gervais character during the show’s run, we last saw her giving a reading at a hip bookstore. The theme was jealousy, and her story was about her ex, Adam, and her ex-best friend, Jessa. It wasn’t a particularly great story; it wasn’t as cutting or as funny as she could be. But it was honest, and it was mature, and it was hers.