Governments that signal a lack of inclusiveness pass on indirect costs to affected states, cities and businesses

By George B. Cunningham 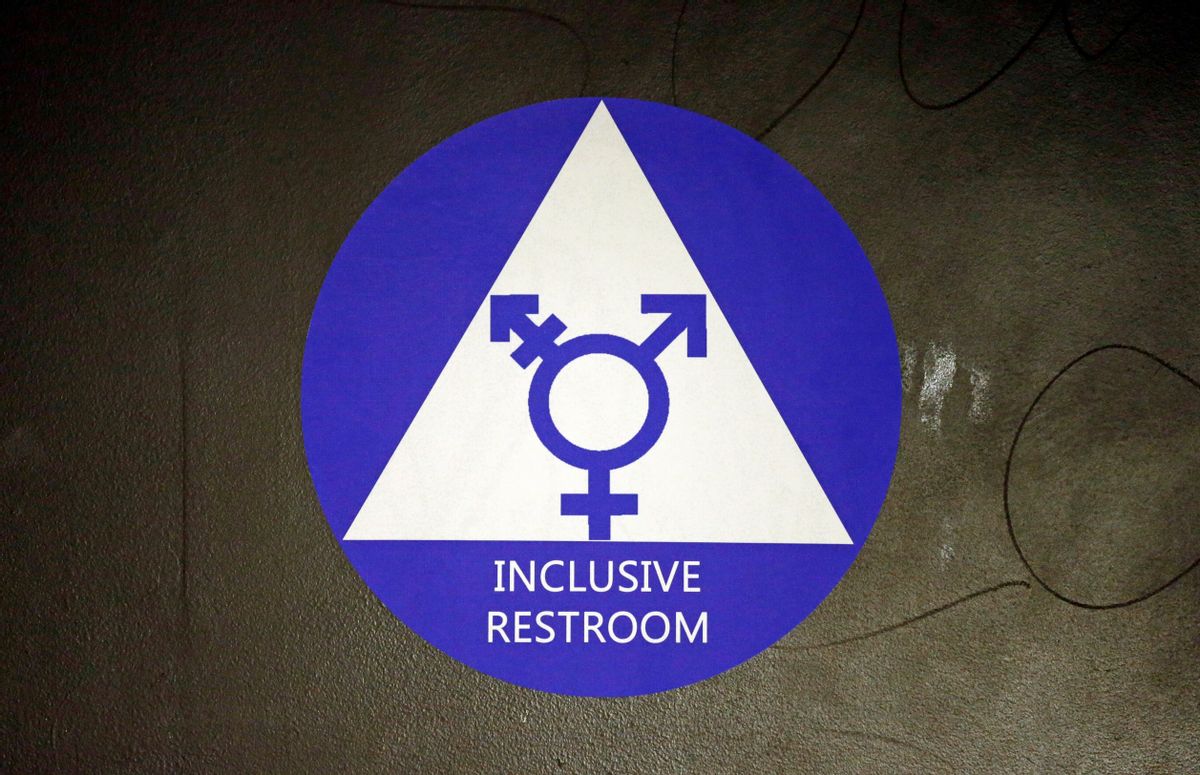 FILE - In this May 17, 2016, file photo, a new sticker designates a gender neutral bathroom at Nathan Hale high school in Seattle. A federal judge in Texas is blocking for now the Obama administration's directive to U.S. public schools that transgender students must be allowed to use the bathrooms and locker rooms consistent with their chosen gender identity. () (AP Photo/Elaine Thompson, File)
--

When it comes to “bathroom bills” and other legislation that curtails the rights of lesbian, gay, bisexual and transgender (LGBT) individuals, North Carolina was a first actor. But, if some lawmakers have their way, many states — and even the federal government — will quickly follow suit.

So far this year, 11 states have proposed legislation requiring people to use bathrooms in government buildings, public schools and public universities consistent with the sex assigned on their birth certificate. The issue is hardly new, and lawmakers in these and other states have proposed similar bills in the past. Only one, North Carolina, however, has managed to pass such a law, having done so in 2016.

Other states like Wyoming have proposed legislation that allows discrimination against the LGBT community on religious grounds. This bill also forbids government agencies from passing nondiscrimination bills or ordinances.

At the federal level, Republican Texas Sen. Ted Cruz recently announced that he would reintroduce the First Amendment Defense Act. This bill would prohibit the government from punishing business owners who discriminate against LGBT individuals based on their religious beliefs or moral convictions.

Despite the fervor surrounding these bills, there is a host of problems associated with them. To borrow from Chuck Smith, executive director of Equality Texas, discriminatory laws like these are “morally bankrupt and wrong.”

Beyond such moral objections, these bills also carry a host of economic, health and other consequences, as North Carolina has learned. Research in the area of regional economic development, and my own work with sport organizations, shows how laws such as these send a message of exclusion, drive away creative people, and ultimately hurt workplace creativity and performance. As a result, long-term economic prosperity suffers.

Proponents of so-called bathroom bills tend to argue that they’re trying to stop sexual predators and would-be child molesters from abusing local laws that allow trans people to use the restroom of the gender with which they identify. However, there is a no scientific evidence linking members of the LGBT community with child molestation.

Others suggest that men would pretend to be trans so they might be able to assault women and children in women’s restrooms. These fears are not supported by statistics, however, as communities that have inclusive bathroom policies have not witnessed a rise in assault cases.

Thus, the underlying premise — protection of people — is based on outdated stereotypes, faulty science and zero evidence. Rather, discriminatory laws tend to cause harm, in terms of health and well-being.

Researchers have shown that trans individuals who face discrimination are more likely than their peers to attempt suicide. Further, when trans individuals cannot use the restroom that matches their gender identity and expression, they are likely to be harassed and abused.

But beyond these moral and health-related consequences, there are real economic damages associated with “bathroom bills” and other forms of “legal” discrimination.

North Carolina experienced as much when it passed its legislation in 2016. Scores of businesses and entertainers either canceled upcoming events or opted to forgo moving their business operations to the state in the future. According to Forbes, the end result was a $600 million economic loss, including tax revenue, directly attributable to law. These effects are consistent with research showing that discriminatory laws undermine economic growth.

Not surprisingly, a number of economists have forecast similar economic peril for states considering discriminatory laws. In Texas, for example, an economic impact study conducted by the Texas Association of Businesses estimated an $8.5 billion loss in GDP.

The loss of major events represents a possibility. For example, San Antonio is slated to host the National Collegiate Athletic Association Men’s Final Four basketball championships in 2018, with an expected economic impact of almost $240 million. That could be in jeopardy if the bill is passed. The NCAA moved championship events out of North Carolina after its bathroom bill became law.

These discussions of the adverse economic impact of discriminatory laws still miss a crucial point: Governments that signal a lack of inclusiveness pass on indirect costs to affected states, cities and businesses.

That’s because businesses, entertainers and major events tend to want to reward and associate with inclusive entities and avoid those that exclude. While this might not have been the case even 20 years ago, shifting societal attitudes toward LGBT inclusion necessitate a strategic shift.

This pattern is seen in several ways.

First, organizations recognized for inclusion of LGBT individuals outperform their less inclusive peers in terms of stock price returns. This suggests that investors acknowledge the value of having policies and practices that are inclusive.

Noted University of Toronto professor and urban studies theorist Richard Florida developed a framework, creative capital theory, that sheds further light on the topic. This perspective suggests that attracting creative people is key to generating regional economic development. Creative people are most likely to move to a region when that space is marked by an influx of technology, talented individuals and an inclusive culture.

Third, my colleagues and I have applied Florida’s ideas to the organizational level of analysis, with a particular focus on the sport and physical activity setting. Consistent with patterns seen at the regional level, we have observed that LGBT-inclusive organizations have creative workplace cultures and, subsequently, outshine their peers on objective measures of success, such as the performance of their teams. Our experimental work shows that people are likely to patronize organizations that signal LGBT inclusiveness. This is largely due to the consumers’ belief that such organizations embrace diversity in other areas, such as race and gender.

Finally, the reaction to North Carolina’s law shows that companies want to be associated with inclusive policies. As the old adage goes, “you are known by the company you keep.”

People frequently make cognitive linkages between companies and the entities with which they are associated. This is why, for example, many companies will seek celebrity endorsers, as they anticipate that the positive feelings fans assign to the celebrities are transferred to the organization itself.

These same dynamics occur when companies or events are linked with negative associations. But in this case, those associations hurt the companies and events involved.

Thus, when groups have events in states that are discriminatory toward LGBT individuals, there’s a natural concern that they’ll get tarred with the same brush. And that’s why sport organizations like the NCAA or the National Basketball Association , entertainers such as Bruce Springsteen and businesses like Dow Chemical all sought to distance themselves from North Carolina and would likely do so in Texas if legislators turn Patrick’s bill into law.

Conservative lawmakers may continue to ignore this evidence and try to pass laws that legalize discrimination, but they do so at great risk to their economies — not to mention the health and well-being of many of their citizens.

George B. Cunningham is a professor and associate dean at Texas A&M University.

By George B. Cunningham

MORE FROM George B. Cunningham