Adele bested Beyoncé for the biggest award of the night, but both wowed 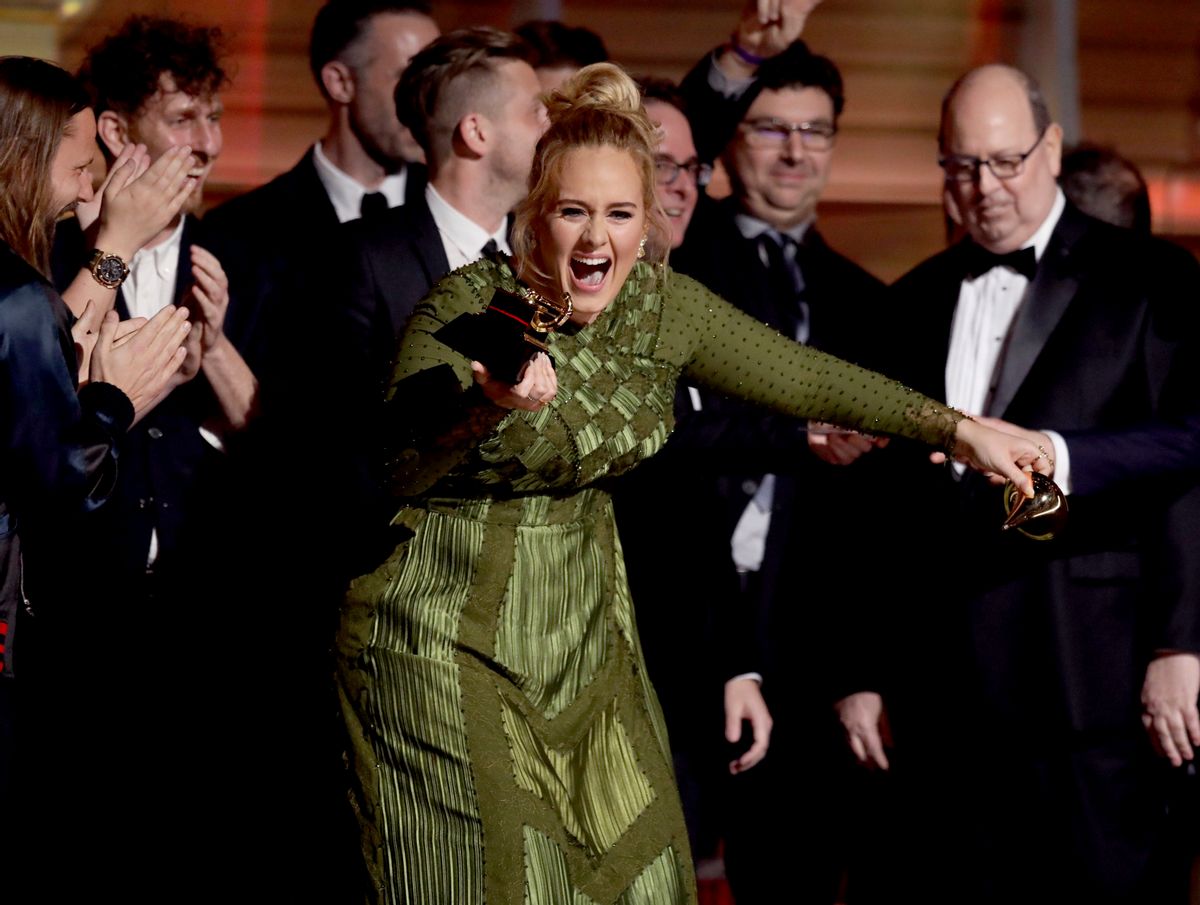 The biggest award of the Grammys (album of the year) was given to Adele, for “25,” rather than to Beyoncé, for “Lemonade” (a horizontal headshake). But Adele did to herself what Kanye infamously did to Taylor Swift at the 2009 Video Music Award show. “I can’t possibly accept this award,” she said. “The ‘Lemonade’ album was just so monumental” (a vertical headshake).

Somewhere else, Macklemore’s stomach churned as he remembered the backlash he had received after he bested Kendrick Lamar in the 2014 Grammy Awards' best rap album contest and then Instagrammed a photo of an apology text he sent to Lamar. "You got robbed,” it read. “I wanted you to win. You should have. It's weird and sucks that I robbed you. I was gonna say that during the speech. Then the music started playing during my speech, and I froze.”

As was the case in Macklemore’s situation, Adele was not merely apologizing for undeservedly winning an award — if so, she might have apologized to Sturgill Simpson, too. Rather, Adele’s apology was an expression of white guilt, a Beyhive repellent called WOKE. “You are our light,” she would go on to say, through nervous tears, to Beyoncé. “And the way you make me and my friends feel and the way you make my black friends feel is empowering. And you make them stand up for themselves.”

It was an uncomfortable moment, made more so by the absence of any black friends standing behind Adele as she rejected the award. But if there is a villain — and villain is entirely the wrong word because voters proclaiming that they honestly liked Adele’s album more than Beyoncé’s is not malevolent. So if there is a culprit for this backward-ass vote, it is the conservative taste of the Recording Academy (a given). And if there is a culprit in attaching undue meaning to this award, it is us. We all put Adele in an impossible position.

For many years, it has been true that politics can and will be mapped onto anything — increasingly so, of course, since the most recent election. Where there is a Rorschach test, there is racism. But to reduce our memories of these events to Vine-sized clips and inflate the cultural rather than aesthetic significance of results often misses something.

In last night’s case, a few things: First, this year’s Grammy Awards event was highly entertaining and well-executed. James Corden was a fun, enthused host, and he even took a couple shots at the president. (“Negative tweets are fake tweets,” he said when he read Twitter criticisms of himself.)

There were a lot of dynamic performances, and the pairings (Sturgill Simpson and the Dap-Kings, A Tribe Called Quest and Anderson .Paak, Lady Gaga and Metallica) fit more naturally than pairings in years past.

Second, throughout the night, pop’s divas shined bright — Katy Perry, Lady Gaga, Adele and especially Beyoncé, who wore all gold and was joined by a hologram double. It was barely mentioned by the media that the biggest award was, for all intents and purposes, a two-woman race.

And third, the volume of anti-Trump sentiments made the spirit of resistance impossible to miss for President Donald Trump; and if he were to respond, the frequency of those sentiments would force him to call half of pop’s biggest stars overrated.

Overall, like the Super Bowl, it was an exceptional show that will probably be underrated in viewers’ memories because of the meaning attached to an outcome.