The happiest place on Earth? Disney would be affected by Trump's threats to China 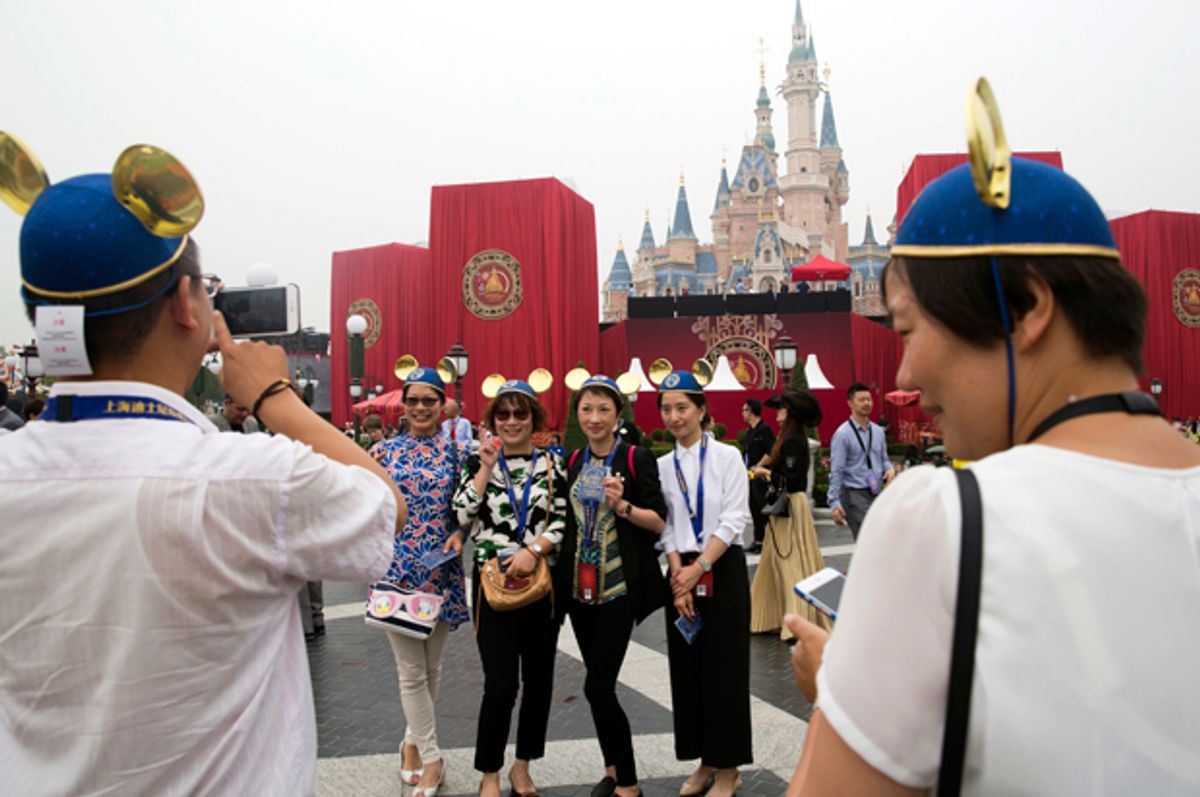 The Walt Disney Co. may be as American as, well, Mickey Mouse, but the Burbank, California, entertainment behemoth has an immense interest in keeping trade relations smooth with China. The country is rapidly becoming a major source of up-and-coming consumers who love American brands: Disney makes movies that are popular in China and two of its three major international theme parks are located there.

This relationship helps explain Disney Chairman and CEO Bob Iger’s warning to President Donald Trump about the damage the president’s trade policy could wreak, should he deal carelessly with the world’s second-largest economy.

"An all-out trade war with China would be damaging to Disney’s business and to business in general,” he said last Tuesday on CNBC’s “Fast Money.” “We have to be very careful" about that.

Trump has blamed China for many of America’s woes and accused Beijing of manipulating its currency in order to artificially suppress the value of the yuan. This, Trump has said, has kept the prices of Chinese goods artificially low, resulting in a massive $347 billion trade deficit for the U.S. side in its relationship with China.

The president has threatened to levy a 45 percent tariff on Chinese imports. Retaliatory tariffs on China's part probably ensue, and China could also dispute the measure to the World Trade Organization and create administrative barriers for U.S. companies doing business in China, which recently accused an unnamed automaker of monopolistic behavior.

A trade war with China sparked by U.S. protectionism would also lead to a rise in anti-American sentiment in China and revenue-shattering boycotts by Chinese consumers of U.S. goods. That's what Japanese automakers Honda and Toyota experienced in 2012 during a diplomatic flare-up between Japan and China over a territorial dispute in the East China Sea, when Chinese customers boycotted Japanese automakers.

Regardless of rhetoric, Disney opened its massive $3.7 billion Shanghai Disney Resort in June under a joint venture with a Chinese investment company and has operated a smaller park in Hong Kong since 2005. The Shanghai resort was packed to full capacity during the recent weeklong Chinese Spring Festival, Iger said.

“Shanghai Disney Resort is off to a strong start,” Disney Chief Financial Officer Christine McCarthy said during a quarterly conference call with investors on Tuesday. “We are very encouraged by what we're seeing there so far.”

With so much money to be made from China’s gradual shift from an industrial-based economy to a consumer one like that of the U.S., Trump may be simply pulling one of his “Art of the Deal” routines of loud hardball tactics. The president has recently tempered his harsh rhetoric against China and pulled back from the type of rhetoric he had deployed during his presidential campaign to appeal to his nationalist base.

The president sent a note to China's president, Xi Jinping, his first direct communication with him, in the hopes of developing a “constructive relationship” with China, White House Press Secretary Sean Spicer said during a press briefing on Thursday.