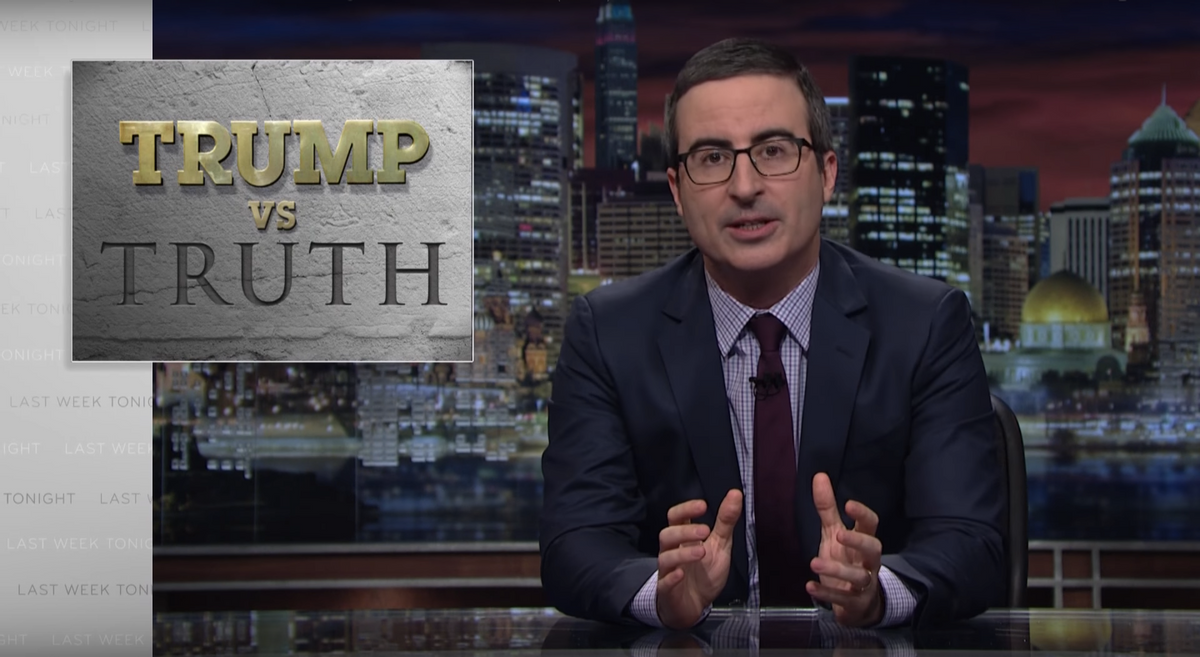 Approaching the one-month anniversary of Donald Trump's inauguration, "Last Week Tonight" host John Oliver acutely summarized where the republic is at on Sunday, declaring, "We have a president capable of standing in the rain and saying it was a sunny day."

The line drew some laughs from his studio audience, but Oliver was not joking. President Trump really said that God intervened on Inauguration Day to prevent rainfall in the District of Columbia — even though it was literally raining during his speech.

To kick off Season 4, Oliver took a look at Trump's propensity to lie. From crowd sizes and the weather to voter fraud and the murder rate, Trump has told some bold lies since he became a politician.

For Oliver, the most important question to ask is where does Trump receive his information. The satirical news host pointed out that many of Trump's innumerable lies come from Fox News talking points, like when Trump parroted a Fox News chyron in a tweet, writing that Chelsea Manning was an ungrateful traitor for calling Barack Obama a "weak leader" — even though Manning never used those words to describe the former president; Fox News host Abby Hunstman did.

It has been clear since day one that Trump's media consumption mostly includes cable news. The most unhealthy part of his media diet, however, is his reliance on Info Wars and Breitbart. Oliver showed a clip of one of Alex Jones' red-faced, mouth-breathing rants, when he vehemently insisted to his audience that Obama wanted to make you "poor and pathetic."

"That is actually [Jones] at his most presentable," Oliver joked. "That is Alex Jones at a job interview. That is Alex Jones meeting his girlfriend's parents for the first time. Now in his more outspoken moments, Jones has argued that the government has the ability to control tornadoes, that the Boston Marathon bombing was a false flag attack and that tap water was a gay bomb."

In other words, a deranged conspiracy theorist is feeding the president facts and information.