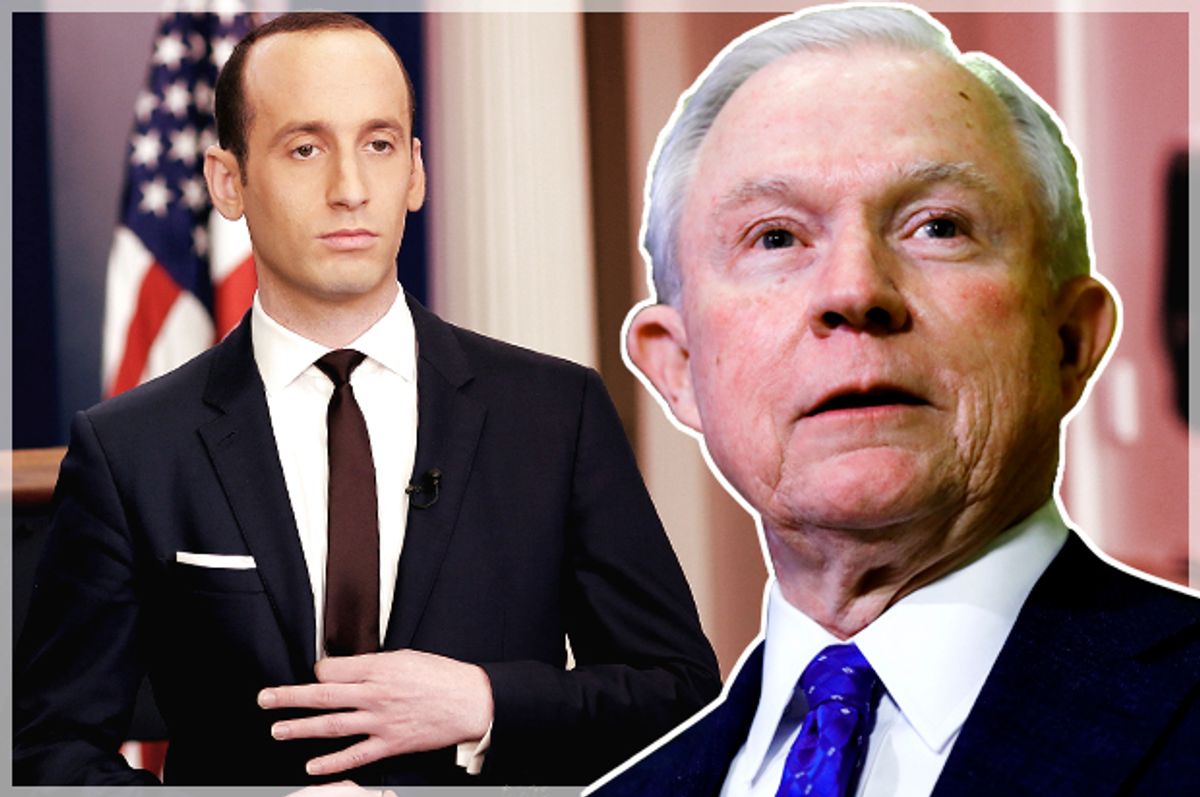 We all know by now that President Donald Trump, along with one of his closest aides, Stephen Miller, has been repeating factually vacant conspiracy theories about massive voter fraud.

Regarding Trump’s falsehoods on this topic, we know that he most likely received his information about 3 million “illegals” voting for Hillary Clinton from radio conspiracy theorist Alex Jones. We also know that countless studies, including one by the George W. Bush administration, determined that the threat of voter fraud is statistically zilch. As for Miller, who has claimed without evidence that multitudes of Massachusetts voters were bused into New Hampshire to illegally vote there, his conspiracy theory has been broadly debunked by everyone from officials in the Granite State to PolitiFact, which awarded Miller’s tall tale a “Pants on Fire” judgment. The same ruling was handed down when New Hampshire Gov. Chris Sununu mentioned the bogus conspiracy theory in November.

New Hampshire’s assistant attorney general, Brian Buonamano, noted to PolitiFact that there are always a few isolated voter fraud convictions. But context matters. About 745,000 votes were cast for president in the 2016 general election in Buonamano’s state, making the rate of voter fraud there astronomically minuscule.

The rate shrinks even further if we look at an entire block of elections, as was the case with the aforementioned Bush-era investigation that found a vote fraud rate of 0.00000013 percent over five years. (That represented 86 convictions over five years out of hundreds of millions of votes cast.) And to point out the obvious, there are already laws in place against voter fraud, as evidenced by the existence of prosecutions and convictions.

Nevertheless, Team Trump is actively pursuing a pair of goals on the elections front, and it must be really, really desperate if it's willing to undermine its own credibility this much by playing with provably false stories. Simply put, the Trump White House is 1) struggling to augment Trump’s electoral numbers as a means of fabricating a nonexistent mandate and 2) attempting to disenfranchise people of color, who overwhelmingly vote Democratic.

The latter effort has been underway for a decade or more. But now with the ascendancy of Trump and all his anti-Latino gibberish, there’s a palpable sense of urgency because the Republican Party has more reason than ever to be concerned about exactly who is voting for which party, now and in the future. Republican strategists can perceive the nature of demographic change, even as their party alienates and ostracizes people of color with repressive and unconstitutional policy proposals. In other words, Republicans need voter ID laws and other forms of voter suppression, especially now that Trump is actively targeting people of color for deportation and the like. To put it another way, voter suppression offers an insurance policy: It's a way to disenfranchise people whom the Trump GOP is giving good reasons to vote —and to vote Democratic.

Before Trump began screeching about it, Republicans never mentioned specific instances of voter fraud, chiefly because the practice doesn’t really exist. They would just talk about mysterious cases of nonspecific voter fraud over and over in the hopes that it would work its way into the bloodstream of the discourse. Without providing any real evidence of voter fraud, state-level Republicans successfully passed dozens of voter ID laws, while engaging in purges of the voter rolls — that lopsidedly affect Democratic voters far more often than Republicans ones. It’s also worth noting that more than a few Republicans accidentally blurted out the real purpose of voter ID and voter suppression tactics: to elect more Republicans by keeping the electorate disproportionately white amid a growing brown population.

Now that Trump and his white nationalist, alt-right disciples have risen to power, they’re wheeling out the heavy artillery with these ludicrous Alex Jones fever dreams to amplify the threat level. If we combine the lies with the confirmation of anti-voting-rights villain Jeff Sessions as attorney general, it looks clear that the Trump administration hopes to further metastasize voter suppression tactics with the help of a friendly gatekeeper at the Justice Department.

The newly fortified mission is to erase or at least undermine the idea that Hillary Clinton won the popular vote, for the sake of Trump’s porcelain insecurities, while also seeking to expand voter suppression tactics. (Former Attorney General Eric Holder, on the other hand, routinely challenged laws intended to undermine the Voting Rights Act, most famously in the Shelby vs. Holder case.) Trump himself has been flogging a 2012 Pew study as evidence of voter fraud even though the study doesn’t actually address that issue; it's about duplicate registrations. Several members of Trump’s own inner circle, including a daughter and a son-in-law as well as White House strategist Steve Bannon, are registered in multiple states. Again, that isn’t voter fraud. It’s a registration problem.

If the GOP can continue to make voting as difficult as possible for minorities and other Democratic-leaning factions, Republicans have a path toward winning more seats in 2018 and 2020, after which time they have a chance at further gerrymandering the congressional map while setting the table for the easy ratification of possible (and terrifying) constitutional amendments. Make no mistake, none of this is about voter fraud. It’s about rigging the game before it’s even played. They’re pulling a Captain Kirk — altering the Kobayashi Maru test before the fact.

While it would appear that changing voter demographics are poised to move the nation slowly but surely away from GOP control, Trump’s party is willing to do whatever it takes to prevent this (including adding more fuel to the voter fraud fire with unproven or demonstrably false theories). As I recently mentioned in Salon, Trump's lies are often believed by way too many voters. More than half of those who support Trump’s Muslim ban, for example, think the Bowling Green massacre is real. According to a recent Quinnipiac poll, half of all the Republican voters surveyed believe Trump’s lie about 3 million illegal Clinton votes. And that's even though the president is merely repeating the word of Alex Jones, who in turn is repeating the word of some random guy on Twitter who hasn’t produced a single shred of evidence — and is registered to vote in more than one state.

Not only does this represent a further untethering of the GOP from reality; it should also serve as a wakeup call for Democrats to begin engaging at the state and local level in order to roll back the voter suppression tide and bring back fairness and facts to the policy table. Otherwise, the shrinking GOP minority will continue to wield power by way of discriminatory laws cooked up out of conspiracy theories borrowed from known flamflam artists and used to artificially inflate Donald Trump's electoral manhood.