As White House spirals into crisis, what will Congress do? GOP leaders face unhappy choice

As Trump's White House implodes, congressional Republicans must confront a dilemma: their country or their agenda 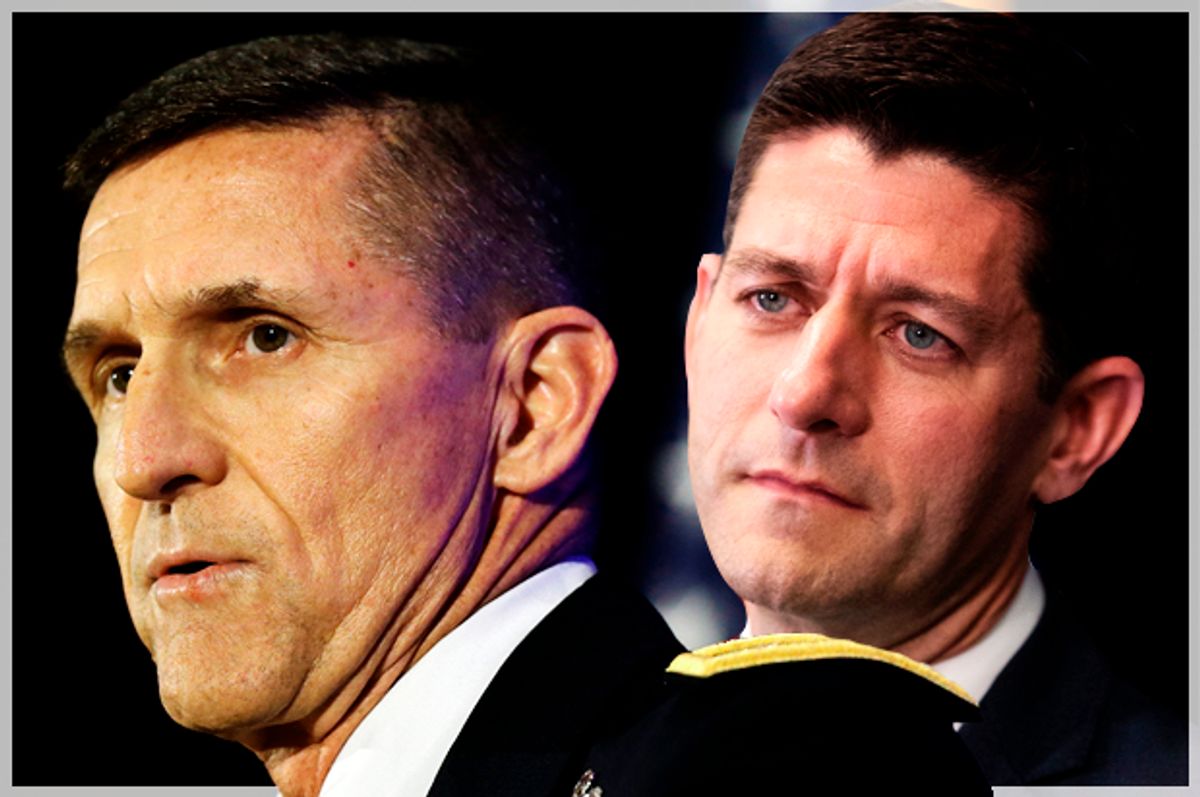 All hell is breaking loose in the White House this week. With the resignation of Michael Flynn as national security adviser on Monday night and the ensuing fallout, the Trump administration is careening into a full-blown crisis. This didn't come out of nowhere. It's been obvious since the campaign that Donald Trump's alleged leadership talents were more hype than reality.

His fluky campaign victory convinced him that he was a genius. But he's never run anything more complicated than his family business, doesn't read books or listen to people and is a narcissist who thinks he already knows everything there is to know and actually knows almost nothing.

This is not the first time we've had presidents who didn't have a lot going on upstairs or were a bit kooky. Ronald Reagan and George W. Bush come to mind when you think about the former and Richard Nixon was more than a little bit unbalanced. But both Reagan and Bush respected the office and hired experienced staff to help them execute the job professionally. Nixon had major personality defects but was highly intelligent. Trump's incompetence and extreme egotism are a lethal combination and it's led to his presidency's coming apart before it even came together.

Our democratic system does have methods to deal with a situation like this. The press was slow off the mark but is working hard to inform the public now that Trump has assumed office. Reporters seem to be blessed with dozens of sources from inside the administration, government agencies and the intelligence services, all of whom seem to be in a near state of panic about the evolving Trump debacle.

The courts have independent power and have already begun to deploy it against Trump's ill-considered travel ban. At the end of the day they may not be able to stop the administration's odious orders entirely, but they are slowing down the process. Trump and his staff may not understand that the judiciary is an equal branch but judges do. Although they generally show a lot of deference to the executive in national security cases, this early experience may have them exerting more resistance than usual.

The federal police agencies and the intelligence community have vast power to investigate, and from what we have learned through the Flynn case, they are doing just that. But while the Department of Justice could prosecute staff, the president can be removed only through impeachment or invoking the 25th Amendment, checks that belong solely to Congress. Unfortunately, that looks like the least promising avenue for accountability.

Congressional investigations are familiar events in American political life going back many decades and have included the McCarthy hearings, the Watergate and Iran-contra scandals, the Clinton impeachment and the 9/11 Commission. Most recently we saw one of the most relentless investigations in history — an examination of the attack in Benghazi, encompassing half a dozen probes by five different committees and the formation of a Select House Committee for that specific purpose. Jason Chaffetz, the chair of the House Oversight and Government Reform Committee, promised to continue investigating after the election, saying, “It’s a target-rich environment. Even before we get to Day One, we’ve got two years’ worth of material already lined up." Of course, he was envisioning investigations of a White House led by a President Hillary Clinton.

On the news that Flynn had resigned, Chaffetz said the matter "was taking care of itself" and he feels no need to look into it. He's also not interested in Trump's conflicts of interest and has decided to investigate the head of the Office of Government Ethics for questioning the Trump administration’s conflicts of interest.

Rep. David Nunes, chair of the House Intelligence Committee, says he's launching an immediate investigation — of the leaks about the Flynn matter, not about what went on in the White House. He says executive privilege prevents it. (If only Hillary Clinton had known things worked that way! We could have saved tens of millions of dollars and years of fruitless investigating.)

Nunes was part of Trump's transition team and should rightly recuse himself but hasn't indicated any plans to do so and instead issued a glowing statement about the heroism of Michael Flynn. According to Department of Justice rules, Attorney General Jeff Sessions, who also advised Trump throughout the campaign, must recuse himself here as well. There is no word that he has done so — a matter the press will presumably pursue in the coming days.

There is some good news from the Senate. While Majority Leader Mitch McConnell still wishes to confine the investigation to the secretive intelligence committee, a few GOP Senators are taking the matter more seriously, which could perhaps lead to a call for a broader probe. Sens. John McCain, Lindsey Graham, Bob Corker, John Cornyn and Roy Blunt have all made statements at least suggesting that it might be a good idea to look into this thing.

Sen. Rand Paul probably spoke for the majority of Republicans, however, when he told a radio show on Tuesday, "I just don't think it's useful to be doing investigation after investigation, particularly of your own party. We'll never even get started with doing the things we need to do, like repealing Obamacare, if we're spending our whole time having Republicans investigate Republicans. I think it makes no sense."

That's quite a switch from Paul's righteous declaration in 2012 that "you need to have people within your own party that have the wherewithal to stand up to you. If a Republican does injustice, I'll be up on the floor saying the same thing."

As Salon's Simon Maloy noted on Tuesday, this issue has Republicans in a bind. If they let it go and these leaks continue and it becomes obvious that something very bad lies beneath the Flynn scandal, they will look cowardly and unpatriotic. If they do take up the investigation, it could indeed suck up a lot of the energy that they need to pass their ambitious dystopian agenda.

That was the Donald's devil's bargain. As The New York Times reported on Sunday:

[T]he Republican-controlled House and Senate seem to have made a collective decision: They will accommodate — not confront — his conduct as long as he signs their long-stalled conservative proposals on taxes, regulations and health care into law.

“There’s a widely held view among our members that, yes, he’s going to say things on a daily basis that we’re not going to like,” said Senator John Thune of South Dakota, the third-ranking Senate Republican, “but that the broad legislative agenda and goals that we have — if we can stay focused on those and try and get that stuff enacted — those would be big wins.”

Allowing a president to blow up the world is a small price to pay in exchange for tax cuts for the wealthy, am I right?