Can journalists debunk Trump's lies without amplifying them? It's challenging but not impossible 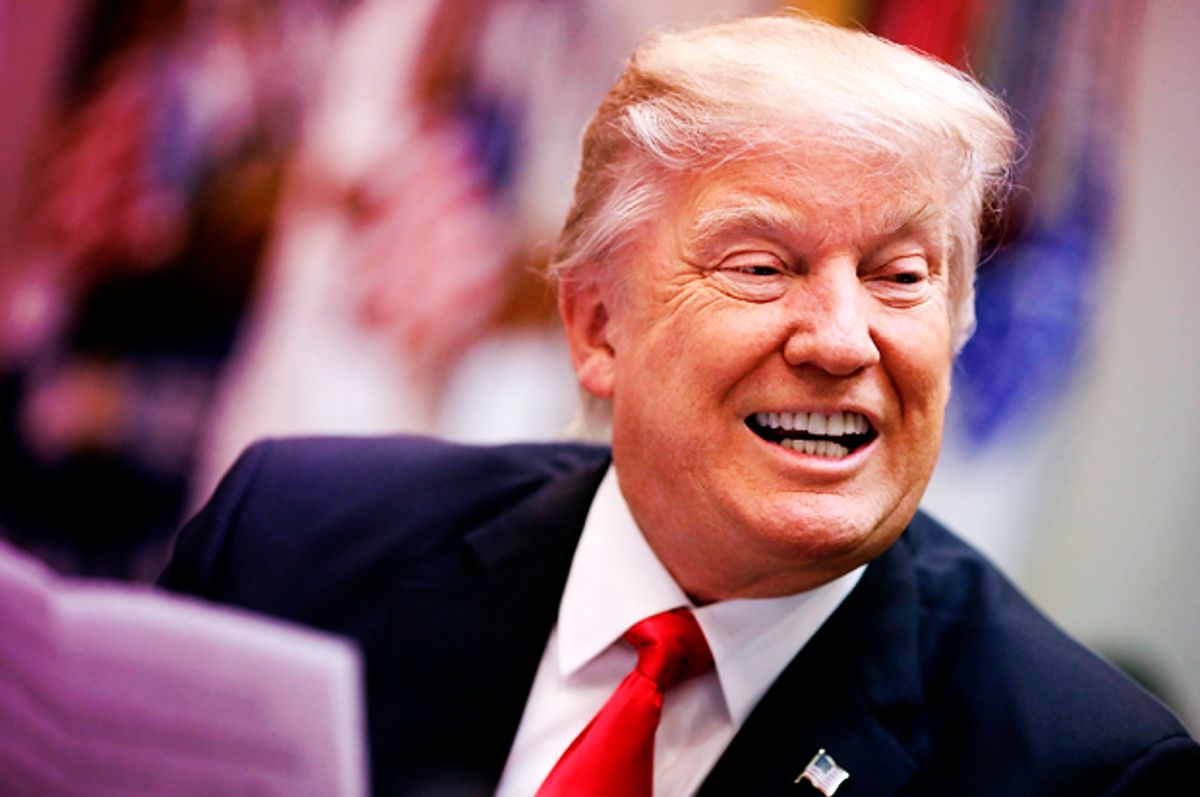 When White House adviser Kellyanne Conway went on TV and made up a fatal but entirely fictional terrorist attack in order to justify President Donald Trump's travel ban, many Trump opponents thought they finally had slam-dunk proof of Conway's unapologetic lying. It's one thing to shamelessly spin Trump's scandals or  manipulate statistics to mislead people, but conjuring dead bodies and terrorist attacks out of thin air? Even the Nazis waited until the Reichstag was on fire before concocting falsehoods about it.

Liberals and leftists had a field day with Conway's fake terrorist attack, joking on social media, creating fake fundraisers and even holding fake memorial services for the nonexistent victims of the "Bowling Green massacre" that Conway had repeatedly mentioned to separate news outlets.

Unfortunately, initial polling data suggests that despite the widespread mockery and debunking, Conway's invention of a fake terrorist attack was successful. Public Policy Polling, a progressive polling organization, found that 51 percent of the Trump supporters polled believe that the "Bowling Green massacre" — which, again, did not happen — justified Trump's now-suspended ban on travelers and immigrants from certain Muslim countries.

How can so many people be so gullible? Well, there are a lot of possibilities. It could be that these folks know, on some level, that the "Bowling Green massacre" is not real but want to believe it's true or partly true.

In September Dan Kahan, a Yale professor who studies the problem of false belief, told Salon many people will affirm false beliefs "because they know it’s really going to get an aversive response from people who have an alternative identity, and who know that’s the true answer.” In other words, they want to piss off people who believe in objective facts.

But it might also be that the constant repetition of the phrase "Bowling Green massacre," even in stories that debunked its occurrence, was so evocative that the idea of it became planted in people's minds, while the debunking didn't stick in people's minds as much.

“Even when you know a piece of information is false, it still has these subtle effects on your attitude," explained Emily Thorson, a political scientist at Boston College, over the phone. "For the Bowling Green example, it might be that someone reads a headline that says, ‘Kellyanne Conway Falsely Talks About Bowling Green Massacre,’ but they’re still hearing the words ‘massacre,’ ‘Bowling Green.’”

In January Thorson published a piece in The Washington Post outlining her research about the effectiveness of debunking. Study participants were divided into three groups; each group received a different article about a fictional politician named John McKenna. Members of the control group read a bland profile of McKenna, those in the second group pored over a profile with accusations of corruption, and the third group read a piece that included the accusation but immediately debunked it, describing it as false.

Thorson found that even though they had been told the accusation was false, members of the third group had a negative view of the fictional candidate. "People who read it knew that McKenna was innocent," Thorson wrote. "But they still evaluated him more negatively than did participants who had never read the false accusation."

Anyone who lived through junior high school understands the dynamic. Rumors start flying that a girl at school is a "slut," and all sorts of wild stories about dirty things she supposedly did are spread. Other kids likely understand, on some level, that the stories aren't true — that the girl in question may even be a virgin. But the social stigma clings to her like a bad smell that won't wash out.

This is the dynamic that the Trump administration, deliberately or not, is exploiting. It invents fake terrorist attacks, falsely claims that crime is out of control or that voting fraud is common. Media outlets dutifully debunk the false claims, but this requires repeating the lie — and the lie is what people remember. Fact-checking might be elevating the very lies it's meant to destroy.

Thorson was particularly concerned not just about the amount of lying done by Trump and his associates but about the kind of lies they tell. In the past, she argued, misinformation tended to be about candidates, as was the case with the persistent campaign of lies about Barack Obama’s birthplace. But Trump and his team lie about policy matters.

With the Trump administration's mendacity, journalists need to be especially careful about not accidentally elevating lies through the creation of articles intended to debunk them. It may seem helpful to run a story headlined "Murder Rates Not at Historic Levels" or "Voter Fraud Not Widespread." But those kinds of stories may lead people to think more about murder and voter fraud than they did before, prompting them to worry more about such issues — even though the point of the articles is that they should worry less.

Thorson suggested that journalists should focus more on what politicians are doing than what they're saying. For instance, instead of writing a story focusing on Trump's false statements about the murder rate, they ought to describe how Trump is trying to create a police state. Then within the text, they could devote a paragraph to the way the administration uses lies to advance unsavory goals.

Journalism is very quote-centric because journalists are interested in the truth. The glory of obtaining a quote from someone interviewed on the public record is that it is, in most cases, indisputably true and easily verified, especially in an age when digital records exist for almost everything. Statistics, policy analysis, ideology and many other things are easy for politicians and their lackeys to distort and quibble over. But a quote — what someone said — has a life of its own.

Unfortunately, that's just what Trump and his team are counting on when they spin outrageous falsehoods: The quotes will stand out and a somber debunking of the lies might not register with an audience.

Because of this, journalists may to rethink their reliance on quotes, a heretical notion for many. When a quote is a lie, journalists should think about not using it at all. If the lie needs to be cited, it should be buried deep within the story, under the debunking and not put in the headline or the first paragraph. If we learn not to lead with the lies, maybe they will lose some of their stickiness.