Rosanna Arquette on playing spiky: "When I was doing indie films, it wasn’t cool and hip. It wasn’t like it is now"

Activism is important to Arquette, who loves to work, is happy with mom roles and psyched for what comes after that 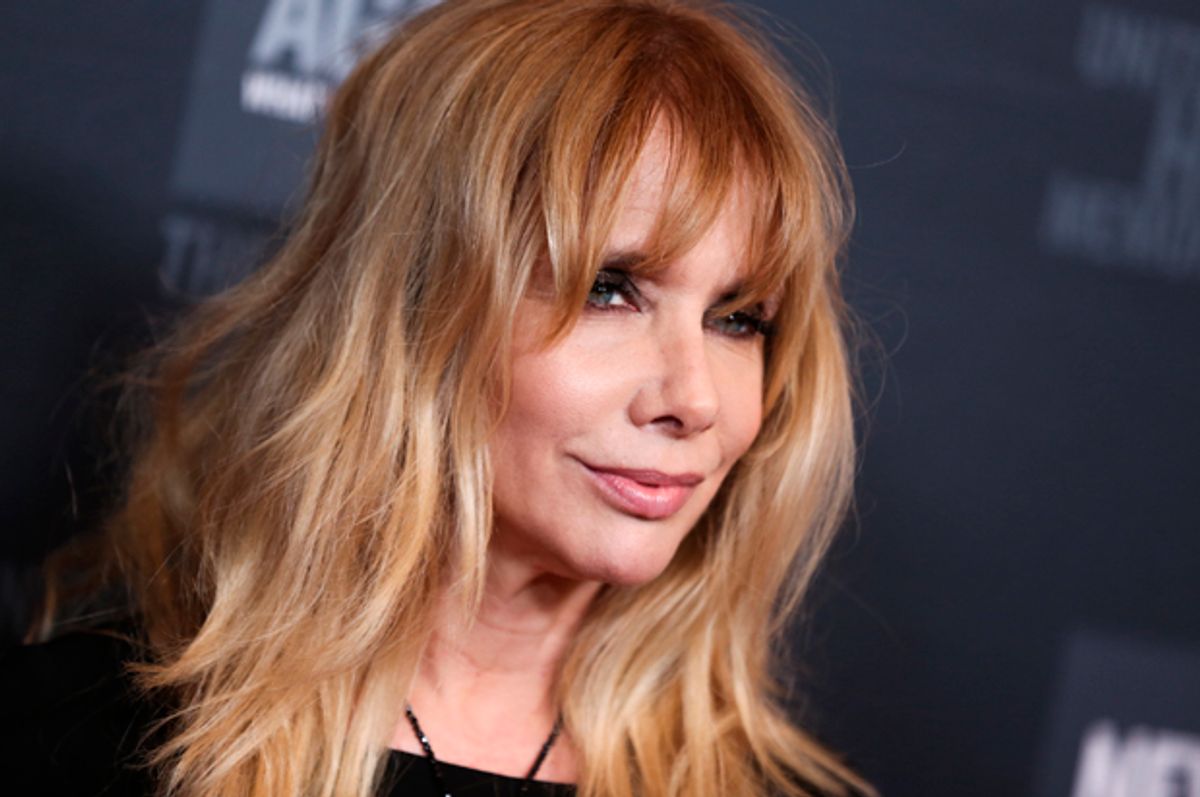 Rosanna Arquette has only a few scenes in the new indie film “Lovesong,” but the actress is indelible in them. Arquette plays Eleanor, a disapproving mother whose daughter Mindy (Jena Malone) is about to get married. Perhaps it is a mistake, Eleanor thinks. The film, directed and co-written by So Yong Kim, is an intimate drama about the delicate but intense friendship between Mindy and Sarah (Riley Keough). Watching this drama, one can imagine what Arquette would have done if she had played either lead role when she was younger.

The actress made a name for herself in feature films playing the overachiever Jill Rosen in John Sayles’ excellent “Baby It’s You” and the bored wife Roberta Glass in Susan Seidelman’s offbeat “Desperately Seeking Susan.” She played a mercurial femme fatale, Marcy Franklin, in Martin Scorsese’s farce “After Hours” and was a suitably fragile and resilient as Cassie in Evelyn Purcell’s underseen drama “Nobody’s Fool.”

Although she had international success with “The Big Blue” and worked with Quentin Tarantino on “Pulp Fiction” and with David Cronenberg on “Crash,” Arquette has long gravitated in her career toward making independent films and women-directed movies like “Lovesong.” She even directed the well-received documentary “Searching for Debra Winger” about women’s roles and the pressures they face in Hollywood.

The actress spoke — and spoke out — to Salon about her career and her process as well as her activism and her late sibling, Alexis.

In “Lovesong,” Eleanor is really judgy. She questions and complains. Why is she so insecure, cranky and unsupportive?

You work hard as a mother not to be those things; as you send your kid out into the world, they make their own choices. I know parents have a hard time letting their kids spread their wings and fly. I tapped into my own judgmental moments and those moments all mothers have: What’s that about? I thought of myself as the coolest hippest mother, but then your kid does something that’s not cool. Eleanor was a very unhappy woman who couldn’t get into her own joy, grace and freedom.

So I kept thinking watching “Lovesong” if you were to play one of the leads, would you be the responsible Sarah, who is raising a young daughter, or the spiky Mindy?

I would have been spiky. There are so many parts of my life and times in my life when I didn’t have the tools I have now or the growth spiritually. I’d be spiky. You grow, change and evolve.

What I respond to in your work is that I get to work out who your characters are by watching you work out who the character is. I think that’s the magic you bring to your roles. What can you say about that process?

It’s interesting. I just played Sara Gadon’s mom in [the forthcoming film “Octavio Is Dead.”] I’m in major mom mode now, and I just had to play a really intense, codependent mother who never got to live her life or her truth. She was focused on her daughter. I feel like I’m always searching and figuring it out myself — as you hear in this conversation! I think I live life really spontaneously. That drives people crazy. There is no preparation. I’m sitting here with suitcases and stuff piled up, and we’re just having a conversation that’s real.

I like to live spontaneously, but there needs to be some organization. I think recently — because the world is so insane and I’ve been so enraged — I found myself spiraling into the worst depression. I am hopeful that we will stand strong and keep our country intact. It’s powerful to watch what’s happening. The Women’s March was just the beginning. It’s now a “for humanity” march. I am tapping into the fierce spirit of what is right and what is really wrong, and my life has been more about activism these days.

Yes! I just asked my partner this morning, “Do you think things are as bad or worse than we expected?”

It’s worse. Bernie was right. Maybe this revolution wouldn’t be happening, but we wouldn’t be banning Muslims. And it’s frightening to see what’s happening with abortions and for the LGBT community. We will be a better country because people are coming together. Very smart Republicans are waking up and going, What is this? This is not OK! That’s part of the spiral. It’s been a shell-shocked zombie-like grief walking around. And grief is an ugly monster.

I am under the impression that you are fearless as an actress and will try anything . . .

Thank you. That’s a huge compliment. I like to think of myself as fearless. I embrace a character and go full on — and it’s real and freeing. I don’t worry that I look terrible in this. If she’s supposed to look bad, it’s where you’re supposed to go.

Can you talk about how your career has evolved over the years?

I used to [look for] the incredible project that was supposed to lead to the next one. But usually I did what I wanted to do. There was a time where [my manager] said, “If you do this . . .  you could do . . .” and I would choose the indie film that went straight to video. That’s how I always did it, and I still do.

You’ve worked with everyone from David Bowie in “The Linguini Incident” to Jean-Claude Van Damme in “Nowhere to Run.” Can you talk about making these independent films?

The Van Damme role was supposed to be played by Mel Gibson! I loved making “The Linguini Incident,” which was written by Richard Shepard and Tamar Brott. Richard was 25 when he made that film. He’s gone on and made “The Matador” and “Dom Hemingway” and “Girls.” When I was doing indie films, it wasn’t cool and hip. It wasn’t like it is now, where it’s prestigious and cool. They didn’t have Independent Spirit Awards.

I was just trying to make a movie and my agent would be asking me, “Why do that?” Luc Besson wanted me to go to France to do his film “Subway,” when I was on the top of the list. And my agent would ask, “Why do a film by a French guy no one knows.” Look at Luc now!

You did work with Luc on “The Big Blue” a few years later. Your “Big Blue” co-star, Jean-Marc Barr, directed you a few years after that in “Too Much Flesh” and “Being Light.” You tend to work with the same people on multiple projects, for example, Allison Anders on “Things Behind the Sun” and “Sugar Town.” Can you talk about your loyalty to filmmakers?

If they ask me and I had a great experience, I’m in. I worked with Martin Scorsese a few times. I’d love to work with John Sayles again.

Jean-Marc has a baby now. We run into each other at film festivals. He is so talented and was poised to be a huge movie star, and he chose art over commerce. I respect him for that.

I do too! You addressed how women are treated in film industry in the documentary you directed, “Searching for Debra Winger.” How do you feel things have or haven’t changed for women filmmakers since that film came out?

I just finished working with So Yong Kim in “Lovesong” and Sook-Lin Lee for “Octavio Is Dead.” Apparently, the numbers just came out and there are less women filmmakers working now. It’s shocking! How can this be? It shouldn’t be after the controversy and powerhousing. But it’s still a boys club, and it will be until the boys get with it as Ted Sarandos of Netflix has done. He understands it. Look at Ava DuVernay! Have you seen “The 13th?”

Yes, in New York over Christmas; it’s excellent. And “I am Not Your Negro,” which just came out, is a great companion film.

I haven’t seen that yet. I am watching “The OA” on Netflix. Brit Marling is a great talent, and you see these creative things on Netflix or Amazon, which are doing innovative, cool work: Winona in “Stranger Things.” I’d love to work like that and find something wonderful to sink my teeth into. It’s very exciting.

You have done various roles for TV including some regular series work. Do you prefer having a character that develops over the course of a show, or are you more interested in doing a few days' work, such as Eleanor in “Lovesong.”

I love both. I loved working on “Ray Donovan” at Sony in Los Angeles. I guest starred in three episodes. I would love to work in town, but those jobs are few and far between. I just love to work. And there are a lot of projects I’m involved in. I’m producing something. I want to do another doc.

If I can shift gears for a second, can we talk about your late sibling, Alexis?

We just started the Alexis Arquette Family Foundation. I started that, and we’re going to do some incredible things to provide support for kids who want to transition. The suicides that happened when Trump was elected were staggering. There were so many kids who don’t have support from their families, and they are so depressed. They need housing and help dealing with HIV.

I love your passion! You seem to channel that in your work as well. Can you describe your approach to work?

The stuff I can tap into now is so effortless. It is just there, and I can access this part of me and that’s right for the character. It used to be all about preparing and getting into the zone. Now I can go right into it. That’s how it’s evolved. I feel really comfortable in my skin. I’m playing mom roles now and will be playing grandmother roles soon, and I’m looking forward to that.