Where's Trump now on settlements, the embassy or the two-state solution? Israel's prime minister would love to know 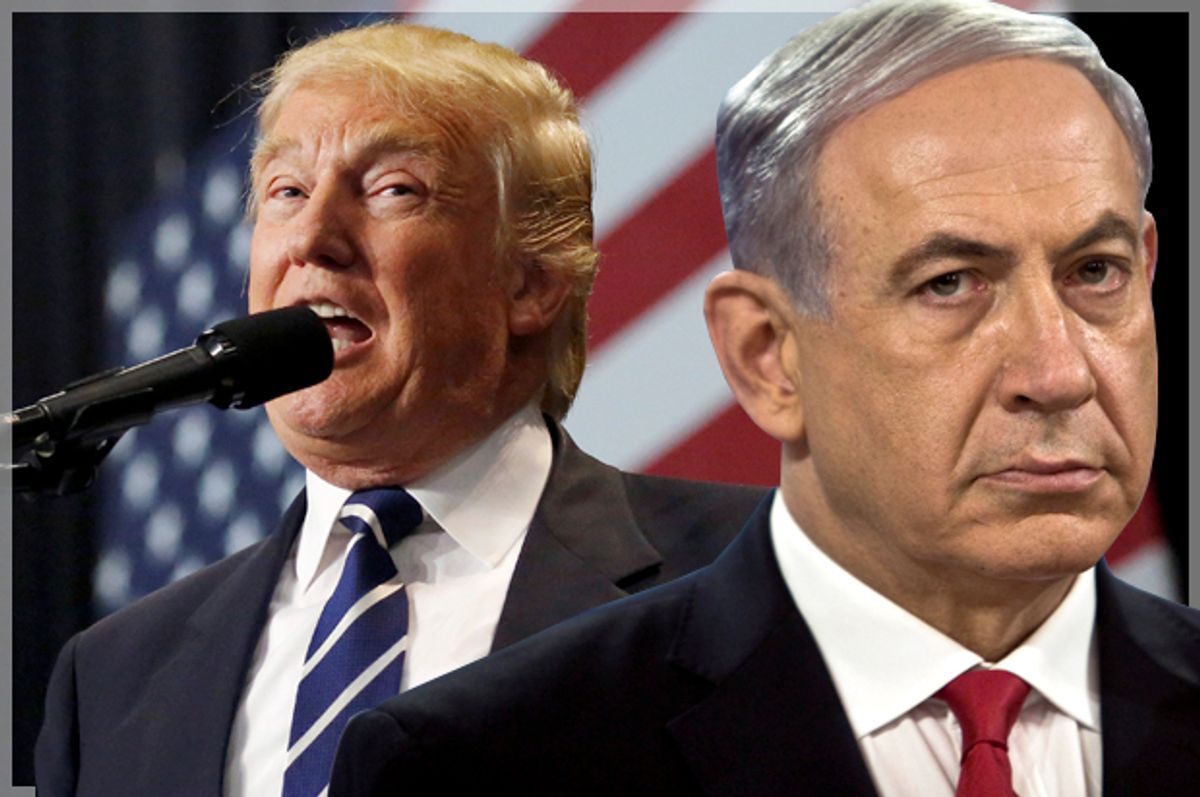 As a presidential candidate, Donald Trump and his top advisers frequently criticized past administrations for telegraphing their movements too much.

“We must as a nation be more unpredictable,” said then-candidate Trump in his first major foreign policy address last April. “We are totally predictable. We tell everything.”

Trump’s chief counselor Steve Bannon appears to hold this view as well, telling The Wall Street Journal in November: “Politics is war. General Sherman would never have gone on TV to tell everyone his plans. I’d never tip my hand to the other side.”

Nowhere is that mix-it-up approach more evident than in the new administration’s policy toward Israel and the Palestinian territories. As Trump and Israeli Prime Minister Benjamin Netanyahu prepare for their first White House meeting on Wednesday, no one outside Trump's inner circle seems to have a clue about where things are headed.

Like so many American presidents before him, Trump wants to play the leading role in brokering a permanent peace treaty between Israel and the Palestinians. On the campaign trail, Trump referred to a peace agreement as “the ultimate deal.”

But there’s no question that the former TV star has sent mixed messages on the matter. Early on in his bid for the Republican nomination, Trump signaled a very different set of policies than those he ended up favoring once he had secured the GOP’s official nod.

In February of last year, Trump said on MSNBC that he wanted to “be sort of a neutral guy” between the two parties, which set some advocates of close American-Israeli relations on edge. The real estate developer also ruffled feathers at a December 2015 gathering of the Republican Jewish Coalition by refusing to say he would support Jerusalem as the undivided capital of Israel, a position that is common among American conservatives but controversial internationally. Israel annexed the eastern part of the city following the country’s 1967 war with Arab states. That annexation has never been recognized by the United Nations, and many Palestinians still envision East Jerusalem as the future capital of an independent Palestinian state.

At the same meeting, Trump also told the attendees of the meeting that they “want to control your own politicians.” In light of that, the businessman said, “You're not going to support me because I don't want your money.”

Once Trump became the presumptive GOP nominee, however, he reversed several of these positions, promising he would move the American embassy from its current location in Tel Aviv to Jerusalem. Trump also constantly denounced the Obama administration’s settlement agreement with Iran, which was designed to limit that country’s offensive nuclear capabilities.

Trump even permitted the Republican platform committee to remove its traditional language in support of a “two-state solution” to the Israeli-Palestinian dispute. During the transition period after his November victory, Trump said he intended to appoint his corporate attorney, David M. Friedman, as U.S. ambassador to Israel. Friedman is an outspoken advocate for the settlements that Israel has been building for years in Palestinian territory on the occupied West Bank, in apparent violation of international law.

Since taking office, however, Trump has flipped again and begun embracing views more in line with those of past presidents of both parties. When asked about relocating the American embassy by the newspaper Israel Hayom, the president demurred, saying, “The embassy [location] is not an easy decision” and that “we will see what happens.”

Asked about the controversial Israeli settlements, Trump said, “They don’t help the process.” He further added, “I am not somebody that believes that going forward with these settlements is a good thing for peace.”

Besides confusing Americans on both sides of these issues, Trump's latest apparent reversal has made things more difficult for Netanyahu within his coalition government. His governing majority in the Knesset, Israel's parliament, relies on the cooperation of hard-line partners, and some completely oppose any peace negotiations with the Palestinians or any form of a future Palestinian state.

Two of Netanyahu’s cabinet members warned the prime minister in no uncertain terms that he should avoid advocating for a separate country for Palestinians. One, public security minister Gilad Erdan, even claimed that Netanyahu opposes Palestinian statehood.

"I think all members of the security cabinet, and foremost the prime minister, oppose a Palestinian state," Erdan told an Israeli radio network after a political conference this past Sunday. He added, however, that he was not certain that Netanyahu would state that position in public.

"The prime minister has to weigh things according to what he feels in the meeting and the positions he encounters there,” he said. Referring to Trump, Erdan continued, “No one knows what the positions of the president and his staff are."

Previously, Erdan had said he wanted to make Palestinians “pay a price” for not accepting Israeli terms in past peace negotiations. Netanyahu remains publicly committed to the two-state solution but in private is said to be touting a “state-minus” proposal to Palestinian leaders that would grant some degree of greater political autonomy under continued military occupation by Israel.

Netanyahu has also come under pressure from his education minister, Naftali Bennett, a member of the hard-line Jewish Home party.

“If in their statements after the meeting they mention, for the first time in Trump’s term, their obligation to forming Palestine or two states in one way or another, we will all feel it in our flesh for years to come,” Bennett wrote in a Facebook post. “The earth will shake.”

Netanyahu’s coalition is also pressuring him to annex some of the older settlement areas and now declare them part of Israel. Several Likud members are introducing a bill to this effect this week and announced their intentions ahead of the Trump-Netanyahu meeting.

While Trump still commands the strong loyalty of Republican voters, he, too, may feel resistance, since Republicans in recent years have sought to refashion their party to be unquestioningly supportive of the Netanyahu government. The president will likely face some pressure from his former presidential rival, Sen. Ted Cruz of Texas, who last month introduced a bill designed to force Trump into relocating the American embassy to Jerusalem.

Trump may also find himself challenged by one of his top financial supporters, casino owner Sheldon Adelson, who also happens to be a big backer of Netanyahu. Adelson is the owner of Israel Hayom as well as the Las Vegas Review-Journal.

The Trump administration is also likely to face pressure at home over the nomination of Friedman to be ambassador to Israel. He is currently set to appear in the Senate on Feb. 16 for a confirmation hearing. Left-of-center Middle East advocacy groups have targeted Friedman for his views on the settlements and also for his inflammatory remarks about J Street, a pro-peace Jewish lobby. Friedman once said the group's leaders were “far worse” than kapos, a reference to Jewish concentration-camp inmates who collaborated with their Nazi captors during the Holocaust.

Despite an affinity for swift action and his cultivation of anti-Arab rhetoric, Netanyahu has some incentive of his own to try to make a peace deal. While he is Israel’s second-longest serving prime minister, he has never held office during the term of a Republican president.

In a statement to reporters before he left for Washington, Netanyahu said, “President Trump and I see eye to eye on the dangers in the region, but also about the opportunities.” The prime minister also reportedly told his cabinet that it would be difficult for him to push back against demands on Israel that Trump might make.

“Trump believes in a deal and in running peace negotiations between Israel and the Palestinians,” Netanyahu was quoted as saying. “We should be careful and not do things that will cause everything to break down. We mustn’t get into a confrontation with him.”

The approach that the Trump administration will take toward Israeli-Palestinian negotiations is said to be one favored by Netanyahu. It is sometimes termed an “outside-in” strategy, relying on the improved relations that Israel has developed behind the scenes with Sunni Muslim countries — including Egypt, Saudi Arabia and the Gulf states — in opposition to the Shiite nations dominated by Iran. Speaking to The New York Times, Dennis Ross, a former peace negotiator for several American presidents, described it this way:

The logic of outside-in is that because the Palestinians are so weak and divided — and because there’s a new, tacit relationship between the Sunni Arabs and Israel — there’s the hope the Arabs would be prepared to do more.

According to the Times, the Trump administration has already discussed this approach with the leaders of Egypt, Saudi Arabia, Abu Dhabi and Turkey.