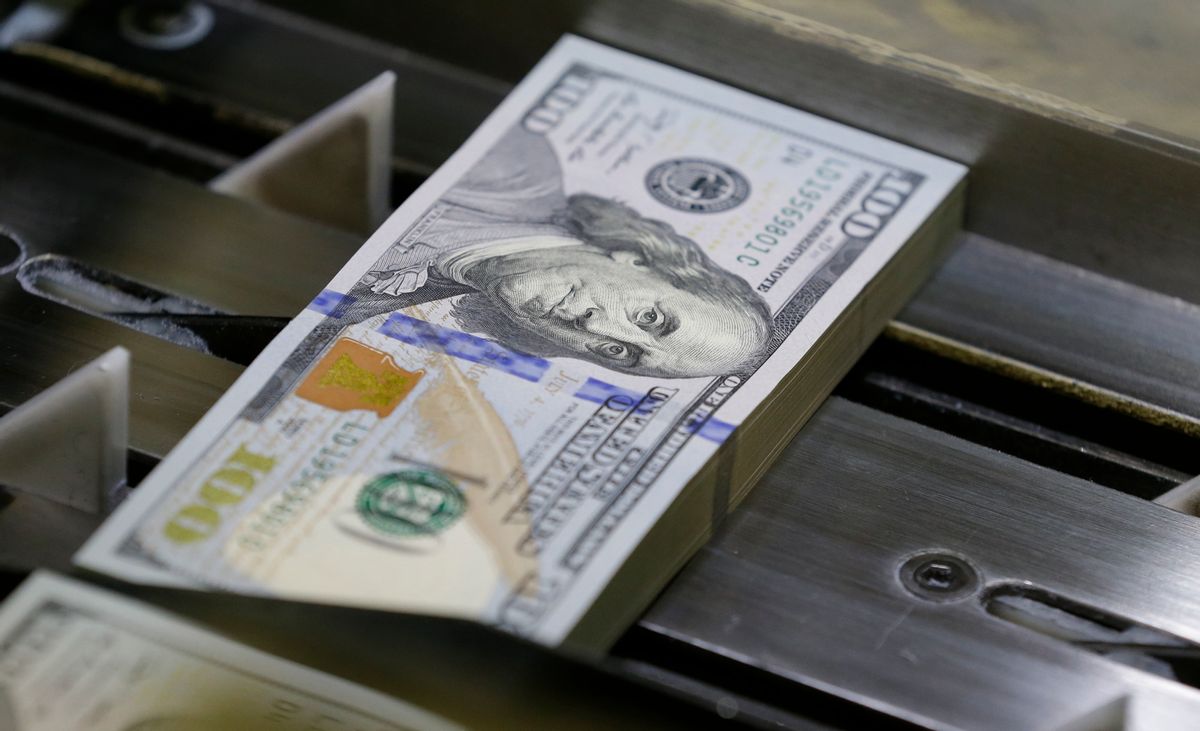 FILE - In this Tuesday, Sept. 24, 2013, file photo, a just-cut stack of $100 bills rolls down the line at the Bureau of Engraving and Printing Western Currency Facility in Fort Worth, Texas. Finding money you didn’t know you had is like discovering lost treasure. Nearly $42 billion in unclaimed property is sitting in state coffers, waiting to be matched with its owners or their heirs. () (AP Photo/LM Otero, File)
--

As Trump said this at the National Prayer Breakfast, his focus was on permitting religious groups to play a more vocal role in political campaigns. Our experience in researching nonprofit organizations, however, suggests there would be much wider and likely negative ramifications if he fully follows through on his pledge.

To understand the impact, we need to examine the Johnson Amendment and consider how the president might seek to alter it.

The Johnson Amendment is a provision of the tax code that prohibits nonprofits registered as charities – and thus eligible to receive tax-deductible donations – from intervening in “any political campaign.”

At its simplest, it means that a charity cannot encourage people to vote for or against a particular candidate for public office – though it can discuss political issues generally. So a nonprofit organization must choose between being designated a charity, which affords it the right to receive tax-deductible contributions, or another tax status that provides more leeway in politicking.

It arose from a long history of religious leaders engaging in political speech. While some of that history marks important and admirable roles, like those of the abolitionists, it is also marred by cases like the anti-Catholic rhetoric from some Protestant pulpits attacking Al Smith in the 1928 election.

The amendment takes its name from then-Senator Lyndon B. Johnson, who proposed it in 1954 to draw a clear line between politics and charity. Some suggest Johnson proposed the amendment because he was angry with a charity that had opposed his candidacy in a primary race for Senate.

Even before its passage, however, the IRS took a dim view of charities engaging in political activities. To the IRS, such activities didn’t further a “charitable purpose,” such as helping the poor, maintenance of public monuments, advancement of religion or the defense of civil rights.

Opponents claim the statute violates their rights under the First Amendment to freedom of speech and religion, while proponents argue it ensures the charitable tax deduction is not inadvertently subsidizing political speech.

Many churches and other religious organizations have led the way in objecting to the amendment’s chilling effect on speech. One effort to fight back, “pulpit freedom Sunday,” has been conducted annually to protest these restrictions. The day is marked by preachers flouting the rule and speaking openly about politics.

But since it applies to all charities, any attempt to “destroy” the amendment would affect the behavior of more than just pastors and priests. Schools, hospitals, addiction centers, food banks and other charities all could then advocate for or against candidates to some extent without losing their charitable status.

Despite his rhetoric, Trump is unlikely to try to entirely eliminate the amendment, in part because his aim seems to be focused on religious speech.

So a bare minimum change could be an executive order that explicitly states that the administration will not enforce the law against religious groups as long as the political activities are conducted as an ancillary part of regular operations.

This would generally ensure that a preacher would not jeopardize a church’s tax-exempt status by supporting a candidate from the pulpit. A move like this would largely be symbolic since there is little evidence that the IRS has sought to revoke the charity status of a church whose preacher violated the ban, such as on pulpit freedom Sunday. The Treasury Department and the IRS may already believe that enforcement of the amendment in this context is impractical and may even violate laws protecting religious freedom.

Such a limited executive order would mean the IRS would still enforce the law when a church is engaged in more secular activity, such as acquiring a billboard to favor or oppose a particular candidate.

A more aggressive posture would be if Trump issues an order telling the IRS not to enforce the ban on churches under any circumstances. Although the idea of a president choosing to not enforce a law dutifully passed by Congress may seem odd and problematic, presidents have wide prosecutorial discretion.

President Obama, for instance used this power to direct his Justice Department to curtail enforcement of some violations of drug and immigration offenses. Its use can also run into legal challenges, as was the case with Obama’s immigration efforts.

On the legislative side, Congress is already pursuing its own modest efforts, such as the Free Speech Fairness Act. That would allow charitable groups to engage in political speech when it’s a normal part of their activities and the costs of doing so are “de minimis” – so no national candidate ads, for example.

While the impact of this bill remains uncertain, it would likely eliminate none of the challenges of enforcing the current ban and might raise more problems.

A more ambitious legislative approach short of killing the amendment would be to add a carve-out that exempts houses of worship altogether. Such an effort would seem consistent with Trump’s goal of permitting religious groups more leeway in supporting candidates. An unintended consequence would be to increase the need for the IRS to answer the question of what constitutes a church.

We have seen this play out already on a smaller scale with the carve-out that exempts churches from filing annual financial reports. Atheist groups have filed lawsuits alleging unequal treatment, and others have sought to push the boundaries when filing for church status. The First Church of Cannabis and John Oliver’s bitingly satirical but short-lived Our Lady of Perpetual Exemption are two examples of unconventional “churches.”

In other words, this would almost certainly increase the flow of groups seeking church status. Besides forcing the IRS to answer that difficult question – what’s a church – it may also undermine public perceptions of churches more broadly.

If one takes the most literal interpretation of the president’s pledge, his aim would be to permit politicking by all charitable organizations. He might pursue this goal through an executive order, but a permanent change would require a legislative solution.

A full repeal of the amendment would have the potential to upend the entire nonprofit sector. After all, limitations on politicking provide a key line between organizations that can receive tax-deductible charitable contributions and those that cannot (e.g., social welfare organizations and political action committees).

A repeal would also open a new pathway for avoiding laws on the disclosure of campaign contributions, creating another so-called dark money channel.

If this line were removed, we should expect to see many organizations that are ostensibly political in nature seeking charity status so they can raise funds through tax-deductible gifts from undisclosed donors. And many nonprofits that weren’t previously political would likely expand to add such spending to their portfolio of activities.

Many fear that blurring the lines between goals intended to serve the general public and those aimed at special interests would undermine public trust in charities and ultimately even put the charitable deduction at risk. With this in mind, prominent nonprofit groups have objected to efforts to repeal the Johnson Amendment.

The push against repeal by charities should be a good indication of its potentially damaging effects. It’s not often that organizations push to retain limits on themselves.

Even if the prohibition goes away, unlimited political activity and its enforcement would remain a problem. That’s because political activity itself does not further a charitable purpose. And the IRS would still have to police whether charities were engaged in too much of it to justify charitable status.

Additionally, determining whether a particular comment or speech is even political can be quite difficult. For instance, if a minister gives a sermon asking his congregation to compare two candidates for office and determine whom Jesus would pick, has the minister engaged in political speech in his capacity as a representative of the church? The IRS has issued guidance with 21 different situations to explain how it makes such determinations.

At the moment, Congress appears reluctant to completely dismantle the Johnson amendment, perhaps because of the concerns we’ve listed above or others. So the likely change, if any, would be a minor shift that gives some nonprofits additional leeway to engage in political speech.

But as we’ve shown, even modest changes to the amendment in this direction are risky and could lead to unintended consequences tantamount to “throwing the baby out with the bathwater.” Given this unclear and treacherous territory on which he has embarked, the president would be wise to tread carefully.