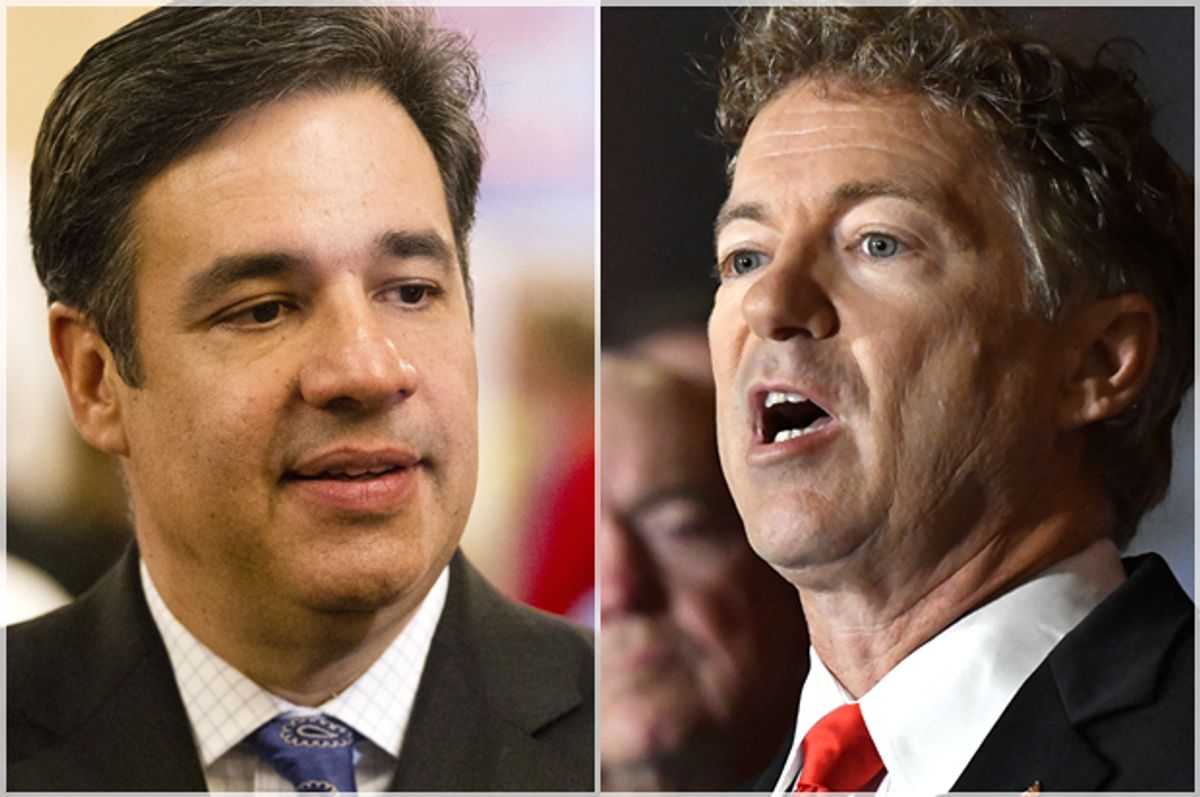 On Tuesday during a roundtable with reporters, hard-right conservative Rep. Raúl Labrador, R-Idaho, was discussing the state of the GOP’s promised repeal of Obamacare when he came achingly close to achieving self-awareness. For a leader of the House Freedom Caucus, the largest group of bloviating grandstanders in the House of Representatives, that would have been quite a breakthrough.

Here is Labrador musing on the current fight, as captured by Christina Marcos of The Hill:

Something that Republicans need to be concerned about is [if] we’re just going to replace Obamacare with Obamacare-lite . . . were we just against Obamacare because it was proposed by Democrats? And if that’s our position, then we’re very hypocritical. Then we really were just taking a political position, not a policy position. If we’re going to . . . change a couple of things and just call it Trumpcare or Ryancare, then what was our fight about for the last six years?

Labrador appears shocked, shocked, to discover that for some in his party, the years-long temper tantrum about repealing the Affordable Care Act might have been nothing more than a political cudgel that Republicans could use to beat up Democrats until they found their way back to a legislative majority. In making these comments, he unwittingly highlighted the repeal dilemma that the party seems to be no closer than it ever was to solving.

The night before Labrador made his comments, the Freedom Caucus, which includes about 35 to 40 of the most hard-core conservative members of the House, called for voting again on repeal legislation, such as was passed by the chamber in 2015. That initial bill would have rolled back all of the Affordable Care Act, including the Medicaid expansion that has helped millions of low-income Americans gain access to health care. The Freedom Caucus said that none of its members would vote for a repeal bill that did not get rid of the expansion.

At the same time, House Speaker Paul Ryan was in a meeting with Senate Republicans to talk about the slow pace of the Obamacare repeal effort. Politico reported:

But not everyone was buying it. Sen. Rand Paul (R-Ky.) left before it was over, having heard enough of a conversation that he says centers around keeping Obamacare's Medicaid expansion intact and creating tax credits that he called a "new entitlement program."

“I hear things that are unacceptable to me,” Paul said. . . . “If they don’t seem to care what conservatives think about complete repeal of Obamacare, they’re going to be shocked when they count the votes.”

The next day Paul and Rep. Mark Sanford, R-S.C., unveiled their own replacement plan, with the Freedom Caucus' support behind it. This bill is a smorgasbord of longtime conservative priorities for the health insurance market: parceling out Medicaid to the states in block grants, allowing insurance to be sold across state lines, making people more dependent on health savings accounts and repealing the upper-income tax increases that were part of the Affordable Care Act.

Most health care economists long ago concluded that such reforms would lead to higher medical costs and millions of people losing their insurance as premiums spiral to previously unseen levels. The individual market would return to one resembling what it looked like before Obamacare's arrival and quite likely worse.

Or as Rand Paul likes to call it, “freedom!”

This then is the dilemma that Raúl Labrador almost teased out for reporters: A truly conservative health insurance reform plan, as envisioned by the Freedom Caucus, would be a creature of nearly Dickensian cruelty. It would yank away health insurance from millions of poor people by essentially ending Medicaid and send costs skyrocketing for the middle- and working-class Americans that Donald Trump claims to represent, while reducing taxes for millionaires.

The Republicans who lead the party in Congress might prefer this plan, but they also have enough political instinct to know that if they admit that, they also admit to being heartless sociopaths with zero regard for the voters they keep fooling into electing them. Unfortunately for them, the alternative to gleefully snatching insurance away from poor people (at least as long as the GOP continues to irrationally equate any form of single-payer health care with full-on socialism) is a compromise plan that looks an awful lot like the Affordable Care Act.

In presenting their plan and gaining the support of the Freedom Caucus, Paul and Sanford hope to force action on the  “repeal and replace” plan by Republican leaders who are getting resistance from, among others, GOP governors who have accepted Medicaid's expansion in their states or who understand that other parts of the ACA have helped their citizens. This conundrum seems to have paralyzed Ryan and Senate Majority Leader Mitch McConnell, at least for the moment.

Of course, the GOP could just decide to wait and let statutory rule changes by the Trump administration kill Obamacare  slowly with a thousand cuts. But doing so would deprive the zealous Republican base of the emotional catharsis of a full repeal. And that catharsis — that final victory over the hated former President Barack Obama — is what the base is really after, even if it means a considerable amount of self-inflicted pain.