“Not going to back down”: Vaccine skeptic Robert F. Kennedy Jr. says President Trump is committed to a "vaccine safety" commission

The well-known anti-vaxxer and Robert De Niro have also offered $100,000 to anyone who can prove vaccine safety 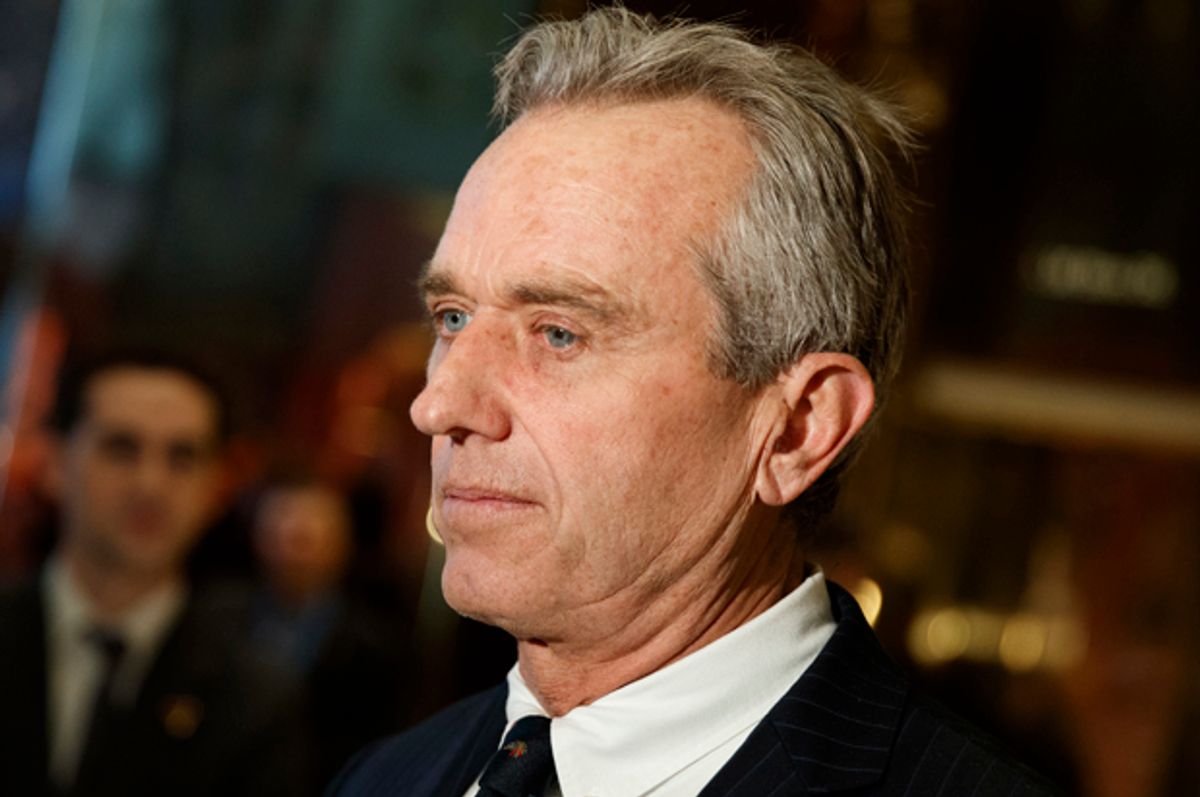 President Donald Trump appears to be gearing up for a big anti-vaccination battle — and he has reportedly selected Robert Kennedy Jr. to be his leading general. Kennedy, one of the nation’s most vocal anti-vaxxers, claimed that the president is committed to investigating a possible link between vaccines and autism.

“Have you seen a big increase in the autism?” the president asked a special education teacher on Monday during his first White House listening session with newly confirmed Education Secretary Betsy DeVos.

“What's going on with autism, when you look at the tremendous increase, it's such an incredible – that's really a a horrible thing to watch, the tremendous amount of increase,” Trump told the teacher.

“Well, maybe we can do something,” Trump said.

President Trump is “not going to back down” from his pledge to study the effects of vaccinations, Kennedy told reporters at his vaccine safety press conference on Wednesday. (A full livestream of Kennedy’s press conference was hosted by right-wing conspiracy theorist Alex Jones’ Infowars.)

Kennedy told Politico that he has met "many times” with members of Trump’s transition team since December. Shortly after meeting with Trump in January, the well-known anti-vaxxer claimed that he had been invited to head a “vaccine safety and scientific integrity” commission.

On Wednesday Kennedy told reporters that he has been “trading documents about what the commission would look like" with administration staff and had spoken with presidential aides three times since his January meeting with Trump. Kennedy said in January when he met with Trump about the issue at Trump Tower, White House aides Steven Bannon, Stephen Miller and Vice President Mike Pence had all participated.

Kennedy said the the president told him a new commission would be made up of “Americans of the highest integrity” such as CEOs and “doctors on television.” (Nevermind that the Advisory Committee for Immunization Practices already studies vaccine safety.)

Kennedy and Trump have raised suspicions about vaccines despite the overwhelming scientific consensus demonstrating their safety. Kennedy has a long history of baselessly claiming that the mercury in shots makes kids sick.

Scientists, pediatricians and public health experts have warned that childhood immunizations could be at risk should such a commission exist. The Trump team was quick to tamp such talk, but Kennedy told reporters on Wednesday that he’s since been assured by the president that his pledge still stands.

Kennedy claimed that Trump told him that the children of five friends “changed” after receiving vaccines and the president “said he wanted to make sure we had the safest vaccines and a regulatory process with integrity,” Politico reported.

“We need a debate,” Kennedy said about a topic that has been thoroughly researched and debated. Kennedy on Wednesday announced at a press conference the formation of the World Mercury Project that will "pay $100,000 to the first journalist, or other individual, who can find a peer-reviewed scientific study demonstrating that thimerosal is safe in the amounts contained in vaccines currently being administered to American children and pregnant women," according to a press release. Kennedy believes “'a meager effort at homework'” will expose that contention as unsupported by science," according to the release.

Del Bigtree, a former producer on the CBS talk show “The Doctors” and one of the producers of the anti-vaccine movie “Vaxxed: From Cover-up to Catastrophe,” also attended the press conference, which was co-hosted by “Vaxxed” producer Robert De Niro. And De Niro, who has an autistic son, has a history of anti-vaccination sympathy and made headlines last year after his documentary was blocked at the Tribeca Film Festival,

"Trump I don’t care about. If he does the right thing, he does the right thing," DeNiro said at the press conference, adding that he was “only concerned” about safety issues, not politics, Buzzfeed reported. DeNiro noted that, although he expected the vaccine safety commission to be established, “I can’t tell you what’s going to happen.”

A group of 350 of medical associations that promote the scientific benefit of vaccines and including the Academic Pediatric Association and the American Academy of Family Physicians wrote Trump on Tuesday. "Vaccines protect the health of children and adults and save lives," the group wrote. "They prevent life-threatening diseases, including forms of cancer. Vaccines have been part of the fabric of our society for decades and are one of the most significant medical innovations of our time."

Because of the introduction of mass vaccinations, smallpox was declared eradicated from the world in 1977. Polio, a disease that routinely afflicted 13,000 to 20,000 Americans every year in the United States before the availability of the vaccine, was officially eliminated from the Western Hemisphere in 1991. Globally, vaccines prevent the deaths of roughly 2.5 million children per year.1 And, data shows that just for children born in the United States in 2009, routine childhood immunizations will prevent approximately 42,000 early deaths and 20 million cases of disease with savings of more than $82 billion in societal costs.