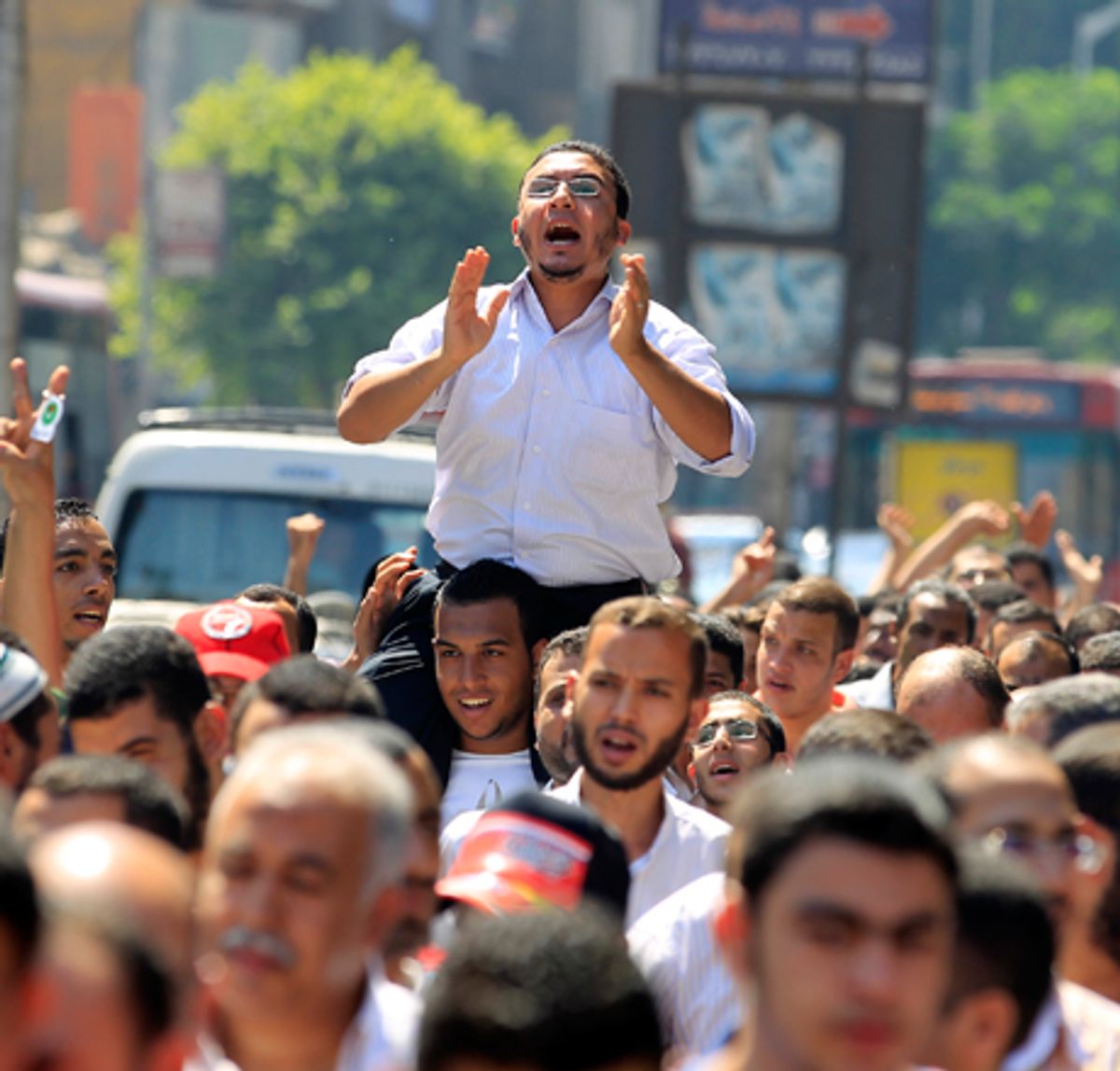 A new initiative advanced by right-wing Republicans in Congress and reportedly backed by the Trump administration puts American Muslim civil society groups in the government's crosshairs. Without the same outraged protests or condemnatory press conferences inspired by Trump's travel ban targeting visitors and dual citizens from seven Muslim-majority countries, the lesser-known effort is aimed at crushing robust Muslim civil society organizing in the United States, using the framework of the war on terror.

The initiative aims to declare the Muslim Brotherhood a terrorist organization, a designation that in practice, is likely to provide a vehicle for a network of anti-Muslim crusaders to hound unaffiliated, mainstream Muslim organizations and potentially criminalize their leadership.

The effort emanates from fringe conspiracy theorists who, backed by a well-heeled Islamophobia industry, espouse the unfounded claim that the Muslim Brotherhood has infiltrated the far reaches of the U.S. government. These fringe figures charge that prominent political players, from Huma Abedin to Grover Norquist to Keith Ellison, are operating as secret agents of the organization.

Arjun Singh Sethi, a civil rights lawyer and professor at Georgetown University Law Center, told AlterNet that this effort represents “version 2.0 of the Muslim ban and will be used as a vehicle to attack and smear Muslim civic and political organizations in the United States. The $57 million Islamophobia industry will do anything in its power to arbitrarily and erroneously link groups in the United States to the Muslim Brotherhood. These accusations alone can destroy reputations and tarnish organizations forever.”

Today, this fringe theory has a direct line to the White House.

This January, Rep. Mario Diaz-Balart and Sen. Ted Cruz introduced the Muslim Brotherhood Terrorist Designation Act in both congressional chambers. The bill also demands the designation of the Iranian Revolutionary Guard Corps as a terrorist organization, a longstanding goal of neoconservative and pro-Israel elements in Washington.

In a press release championing the legislation, Cruz invoked a supposed clash of civilizations. “I am proud to reintroduce these bills that would codify needed reforms in America’s war against radical Islamic terrorism,” he said. “This potent threat to our civilization has intensified under the Obama administration due to the willful blindness of politically correct policies that hamper our safety and security.”

Alongside this legislative push, advisers to Trump are reportedly weighing an executive order to declare the Muslim Brotherhood as a foreign terrorist organization.

“One of the favorite smear tactics of the Islamophobia industry for years has been to accuse individuals and institutions in the U.S. of supporting the mythical Muslim Brotherhood bogeyman,” said Sethi, the civil rights lawyer. “If the Muslim Brotherhood is designated a foreign terrorist organization, this industry will double down on the tactic. This designation could spark a witch hunt similar to what we saw during the red scare. Innocent institutions and individuals could be tarnished and impugned. In addition, the government could invoke expansive material support laws and seek to prosecute individuals and institutions, forfeiting their assets."

Sethi underscored that this political campaign comes despite the fact that the Muslim Brotherhood does not have a known presence in the United States.

In a report released in 2011, the Center for American Progress determined that seven foundations shelled out $42.6 million between 2001 and 2009 to think tanks advancing anti-Muslim policies. In a separate study published in 2015, CAP identified what it called a $57 million industry that is predicated on the spreading of anti-Muslim sentiment. This industry directly supports concrete policy measures targeting Muslim communities in the United States, including the NYPD’s invasive surveillance system and the more than 100 anti-Sharia bills that have been introduced at the state level across the country.

The unfounded claim that the Muslim Brotherhood has infiltrated the U.S. government plays a key role in this industry and is espoused by major figureheads. Among them is Frank Gaffney Jr., who founded the Center for Security Policy, the think tank that produced the shoddy research behind Trump’s campaign pledge to ban Muslims. A prominent anti-Muslim activist and conspiracy theorist, Gaffney served as an adviser to Cruz’s failed presidential campaign and is close colleagues with many in Trump’s cabinet, including Steve Bannon.

Without producing any evidence, Gaffney has repeatedly claimed that the Muslim Brotherhood has infiltrated the U.S. government, levying accusations that numerous officials are agents of the organization, including Hillary Clinton's longtime aide Huma Abedin. In 2011, Gaffney was temporarily barred from the Conservative Political Action Conference for accusing the right-wing activist Grover Norquist of being an agent of the Muslim Brotherhood. Citing the supposed Muslim Brotherhood takeover, Gaffney has repeatedly called for McCarthy-ite investigations targeting Muslim-Americans. “So pervasive now is the MB’s [Muslim Brotherhood’s] ‘civilization jihad’ within the U.S. government and civil institutions that a serious, sustained and rigorous investigation of the phenomenon by the legislative branch is in order,” he argued at the Center for Security Policy in October 2011.

Notably, this is not the only conspiracy theory Gaffney clings to. He has also argued that Barack Obama is a secret Muslim who was not born in the United States and that Saddam Hussein was likely behind the World Trade Center and Oklahoma City bombings.

Gaffney is not alone. Steven Emerson, a notoriously Islamophobic author and pundit, has played a key role in perpetuating the notion that the Obama administration was infiltrated by the Muslim Brotherhood. Emerson has spread baseless propaganda for years, alleging in 1995, for instance, that the Oklahoma City Federal Building had been bombed by Arab "terrorists." Moments later, the bomber was revealed as white nationalist Timothy McVeigh. Two decades later, Emerson appeared on Fox News  to make bogus claims about the existence of Muslim no-go zones in the U.K. Fox was forced to issue numerous corrections and apologies for Emerson’s statements, which then-London Mayor Boris Johnson dismissed as "total nonsense."

While both Gaffney and Emerson are designated anti-Muslim extremists by the Southern Poverty Law Center, their views have been espoused by those in the highest echelons of power. A decade ago, Bannon proposed a documentary-style movie blaming a coalition of liberal Jewish groups and Muslim civil rights organizations for importing terror into America, the Washington Post recently revealed.

Two other former contributors to the white nationalist publication Breitbart—Sebastian Gorka and Katharine Gorka—have recently joined Trump’s cabinet. The pair have built their careers fear-mongering over Muslims. Gorka, who now serves as deputy national security assistant, has previously argued that the United States is a Christian nation. “We don't know where the refugees from war zones are living in America,” he said in a July 15 appearance on Fox News. “We're a Christian nation; we should be charitable to those in need. But charity is not an excuse for suicide.” Katharine Gorka has previously supported far-reaching legislation to declare the Muslim Brotherhood a terrorist organization.

“You have these right-wing fringe theorists who think every Muslim has links to the Muslim Brotherhood, and that’s reason to distrust them,” Faiza Patel, co-director of the Liberty and National Security Program for the Brennan Center for Justice at New York University Law School, told AlterNet. “But now they are close to the center of power and able to push conspiracy theories out there. This could be really used as a way to clamp down on Muslim groups as well as prominent activists.”

Brant Rosen, the founder of the Rabbinical Council of Jewish Voice for Peace, told AlterNet, “As a Jew, I would say this is the targeting of people because of their religion and identity. Jews know all about that. This would be the Muslim registry. This would give the government the opportunity to carry through formally on what it's threatened to do.”

Anti-Muslim extremists have repeatedly and without evidence targeted Muslim civil society organizations as supposed agents of the Muslim Brotherhood, with Breitbart providing a key mouthpiece. The Council on American Islamic Relations (CAIR) is a major target of this campaign, with Breitbart running articles titled, “FBI Chart and Documents Portray CAIR as Hamas-Related Organization” and “10 Reasons to Be Suspicious of CAIR.” Breitbart has also repeatedly targeted the Islamic Society of North America (ISNA) and the Muslim Students Association. Breitbart has even accused the New York Times of generating Muslim Brotherhood propaganda.

In 2014, Rep. Michele Bachmann introduced legislation to “impose sanctions against persons who knowingly provide material support or resources to the Muslim Brotherhood or its affiliates, associated groups, or agents, and for other purposes.” The legislation named key Muslim civil society organizations, including ISNA and CAIR.

Fear-mongering over the Muslim Brotherhood has also provided fodder for targeting Palestinian human rights organizations. “Israel advocacy groups in the U.S. have been at the forefront of efforts to label Muslim, Arab and other groups that advocate for Palestinian rights as ‘terrorist’ with the scantest of evidence and the thinnest threads of association,” Dima Khalidi, the director of Palestine Legal, told AlterNet over email. “David Horowitz, for example, has gone after the student groups the Muslim Students Association (MSA) and Students for Justice in Palestine (SJP) together for alleged association with the Muslim Brotherhood.”

“Notably, Black Lives Matter, which was severely attacked by Israel advocacy groups for its expressions of solidarity with the Palestinian freedom movement, has also been called ‘terrorist,’ with calls to designate it as a terrorist organization,” Khalidi continued. “The slope is ever steeper and more slippery with an administration that has a blatantly anti-Muslim and anti-black agenda.”

Despite previous political efforts to designate the Muslim Brotherhood a terrorist organization, both the Bush and Obama administrations declined. As journalist Waqas Mirza recently noted, the “British government had also rebuked such calls and a report published by the U.K. House of Commons Foreign Affairs Committee last year concluded that the Muslim Brotherhood did not engage in ‘terrorism.’”

Yet, authoritarian governments have continued to exert pressure on the United States to impose the designation, among them the UAE and Egypt. In 2013, Egypt’s determination that the Muslim Brotherhood was a terrorist organization was used to justify a violent and large-scale crackdown on dissent, including mass torture, disappearances and the unfounded arrests of tens of thousands of people. The crackdown followed the massacres of over 2,000 protesters in the Cairo suburb of Rabaa.

Human Rights Watch cited this Egyptian precedent in condemning the political campaign in the U.S. “If the U.S. government designates the Muslim Brotherhood a foreign terrorist group, then not only its members, but anyone either in the United States or abroad suspected of providing support or resources to the group would be at risk of removal from the U.S. if they are non-citizens and having their assets frozen,” the organization stated. “They would also risk unfairly being targeted for prosecution under various laws, including those banning material support for terrorism.”

"This is more terrifying than the Muslim ban,” said Hoda Katebi, an organizer and artist with For The People Artists Collective and communications coordinator for the Chicago chapter of the Council on American-Islamic Relations. “When you add the word ‘terrorist’ to anything, you have been branded by the state and everyone is too afraid to help. Unlike a blanket ban on Muslims that is easy to identify as wrong and rally support against, being called a terrorist as a Muslim essentially erases you and alienates you from support.”

“This is particularly important to be rallying against, particularly important to show up as allies, because this is where most allies will drop off. This is the point where allies will be too afraid and unsure about what to do. Let me tell you now: You must show up and do everything in your power to support Muslims and Muslim civil rights organizations who will be isolated and shut down unjustly by this racialized designation. Never let the state define your enemies.”