Relentless toxicity: Wading through the AP's immigration scoop and the White House response 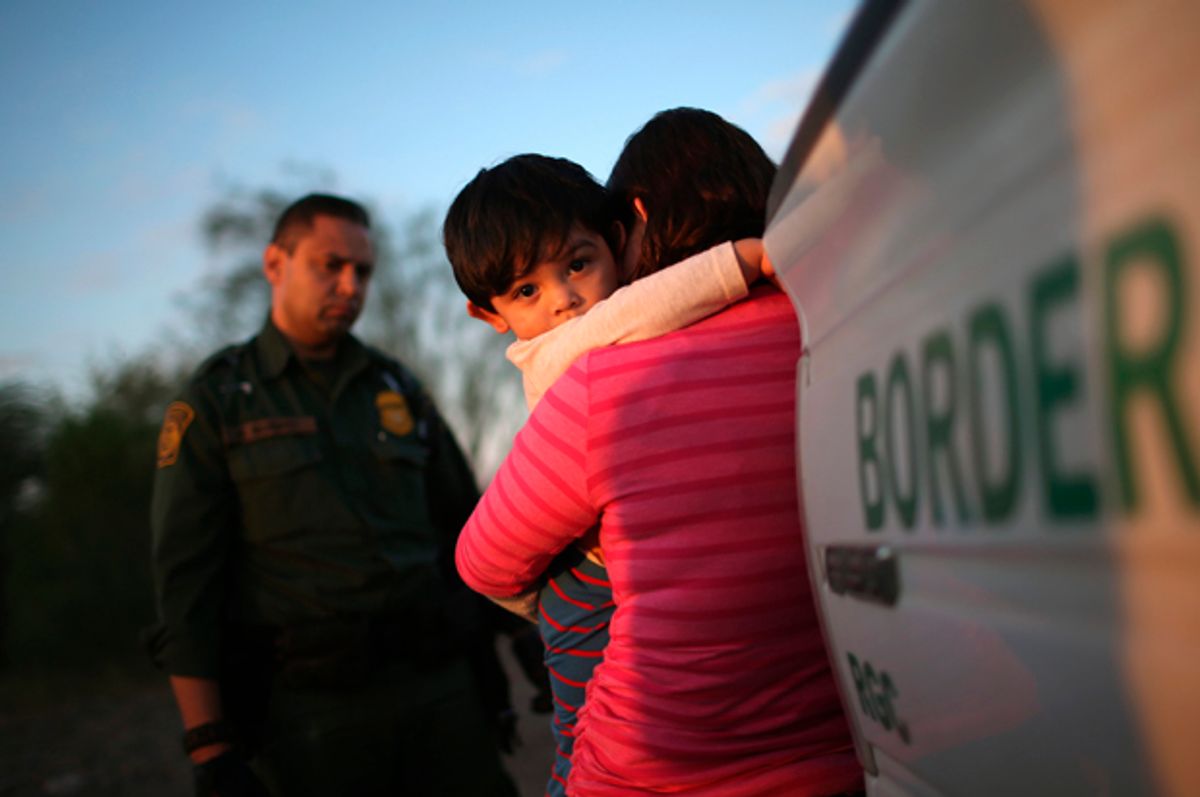 A one-year-old from El Salvador clings to his mother after she turned themselves in to Border Patrol agents on December 7, 2015 near Rio Grande City, Texas (Getty/John Moore)
--

The Associated Press dropped a big scoop Friday morning on a draft memo in which the Trump administration, as the AP put it, “considered a proposal to mobilize as many as 100,000 National Guard troops to round up unauthorized immigrants.”

The AP’s characterization of the memo touched off some harsh reactions from critics of the administration — myself included — who spied the beginnings of Donald Trump’s long-promised “deportation force” in the wire service’s reporting. The White House, meanwhile, dismissed the entire AP report as false and gave ammunition to its supporters to rev up the now-familiar “fake news” refrain.

Well, it turns out everyone screwed up a little bit on this one. Let’s break down a few things about this proposed idea, the AP’s reporting on it and the White House’s response to the AP’s report.

First and foremost, the White House cannot just call up the National Guard to go round up undocumented immigrants, and that is not the proposal that was laid out in the Department of Homeland Security memo. The draft memo explores the possibility of using Section 287(g) of the Immigration and Nationality Act to deputize National Guard members as immigration officers. That statute allows the federal government to reach agreements with state governments empowering “an officer or employee of the State . . . to perform a function of an immigration officer in relation to the investigation, apprehension or detention of aliens in the United States.”

As Vox’s Dara Lind wrote, these arrangements were used extensively during President George W. Bush's administration to give state and local police forces the authority to participate in immigration raids. Empowering the National Guard to arrest and detain undocumented immigrants would represent an expansion of that policy. Doing so would raise thorny legal questions about who would have command over those troops, and you can bet more than few governors would balk at the idea of militarizing immigration enforcement in this way. There’s also the real chance that such a plan would run afoul of the Posse Comitatus Act, which prohibits military personnel from performing civil law enforcement duties (unless expressly authorized by Congress).

So the fact that the administration of President Trump even considered this possibility is definitely newsworthy, but the AP got out over its skis in reporting on the memo. The lede of the AP story states that “the Trump administration considered a proposal to mobilize as many as 100,000 National Guard troops to round up unauthorized immigrants” but the memo does not explicitly say so. It says that National Guard troops (of no specific number) could be empowered to perform duties of immigration officers. That could mean apprehension and detention, but it could also mean helping with intelligence and investigations.

The distinction may be fine, but it matters, given that the draft memo does not lay out any sort of guidance for how National Guard members would be used under this proposal. Having military personnel provide logistical support to immigration enforcement operations is very different from “mobilizing” uniformed soldiers to “round up unauthorized immigrants,” as the AP put it.

Now let’s turn to the White House’s reaction to the story, which encompassed a swift denial and attacks on the AP for even reporting it. Shortly after the AP story dropped, White House officials began telling reporters it was completely false. White House press secretary Sean Spicer told reporters in the press pool that the story “is 100 percent not true. It is false. It is irresponsible to be saying this.” He said, “There is no effort at all to round up, to utilize the National Guard to round up illegal immigrants," adding, “I wish you guys had asked before you tweeted.”

The story is not “100 percent not true,” nor is it “false.” The memo is real, and it floats a proposal to partially militarize immigration enforcement. That’s important and worthy of reporting. As for Spicer’s lament that no one had “asked” about the report before tweeting about it, the Associated Press noted in its story that “the AP had sought comment from the White House beginning Thursday and DHS earlier Friday and had not received a response from either.” If the story were false, as Spicer insisted, then he or one of his colleagues should have taken up the AP’s offer to comment before publication. Instead, Spicer waited until the story went live and then attacked the AP’s credibility by claiming no one had asked for comment.

But I suppose that was bound to happen anyway. The good news here is that the Trump administration is publically and forcefully rejecting the notion of deploying the military to enforce immigration laws. The word of this administration obviously is not worth much and it very well may be lying, but for the time being I’ll take what I can get.