Revealing patterns: It was just going to take some time, now the truth can be gleaned

It is obvious that a coup is underway, about to become underway, or may in fact already be over 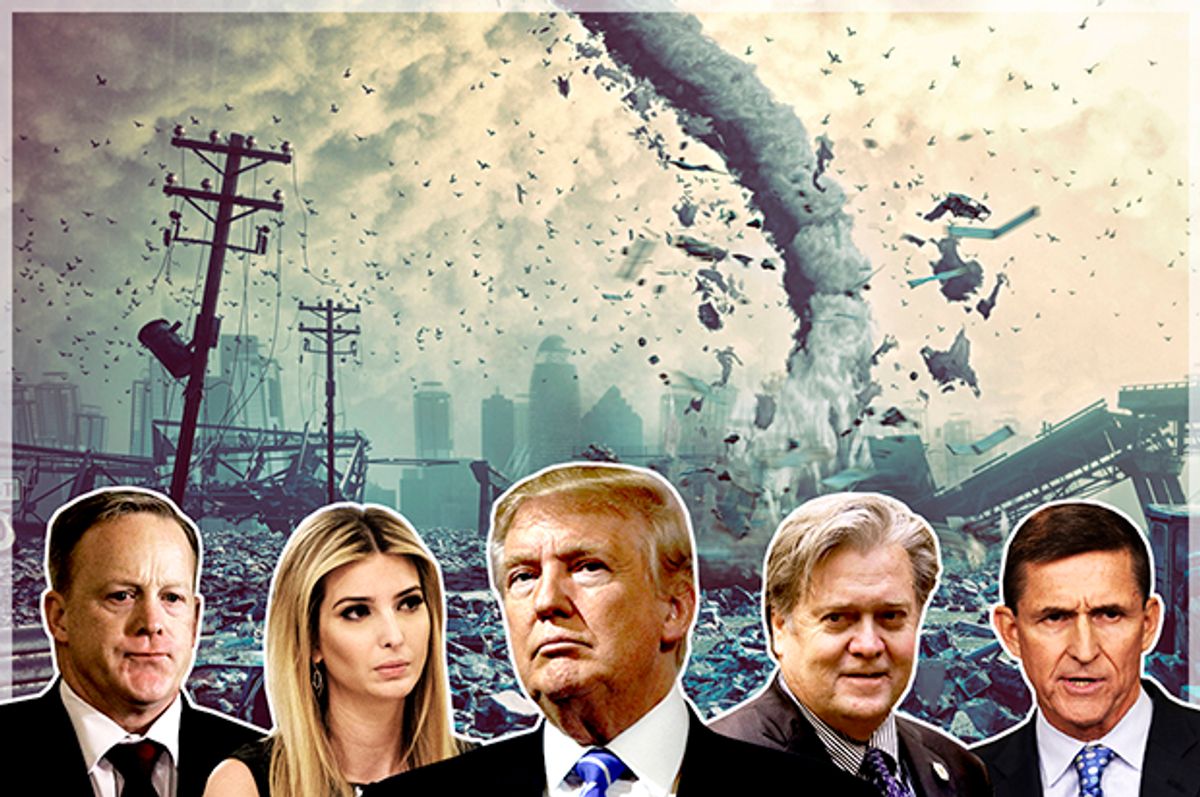 I am getting very close to figuring out some important secrets about what's really going on. For the last month, the news has rolled out of Washington like thread off a spool or maybe yarn or perhaps a garden hose. The metaphor doesn’t matter as long as it implies something twisted, venomous and unknowable. For these are the times in which we live.

Right now, I’m putting it together. It is quite obvious that Kellyanne Conway and Michael Flynn knew that Mike Pence and Steve Bannon had contact with Stephen Miller. Here are some known facts:

1. Donald Trump refused to talk about Jews on Holocaust Remembrance Day. It is no coincidence that Nordstrom, which has ceased to carry Ivanka Trump’s clothing line, is often frequented by Jews. When Reince Preibus made a public statement saying ,“Who cares about Passover; it is a stupid fake Thanksgiving,” it became evident that the administration was running a false anti-Semitic flag operation to attempt to draw attention from its thankless crimes.

2. When one examines the Steele dossier, it is not an accident that the entirety of the document (which has been obtained in secret by anonymous Twitter journalists), is comprised of text messages to Paul Ryan from the Russian embassy.

“We have video of the president with a teenage prostitute so if you please we will take over your government now in exchange for giving him 19 percent of our oil money,” one of them reads. This is a sign that Kellyanne Conway and Sean Spicer are plotting to dismantle the Voting Rights Act.

3. The executive order, as Rudolph Giuliani and Tomi Lahren made very clear on Instagram, was deliberately written in such a way as to sow maximum chaos. President Trump clearly wanted all of America’s attorneys holding signs and chanting slogans at airports so he could steal away the legal system while they weren’t looking and replace it with TV judges. It was clearly in Trump’s best political interest to show that his policies cause misery in babies and for elderly people because that served as a distraction from the fact that the KGB is constantly leaving golf bags full of cash at various holes at Mar-al-Lago. This is the truth, or so I hear.

We can all see what is happening now, I think. Patterns are beginning to emerge. They are both knowable and unknowable, true and false, alpha and omega. According to documents obtained by Edward Snowden and shared with The Intercept and Russia Today, the “government” is merely a front for international banking and energy interests, plus Carl’s Jr. As the Guardian reported and NBC tweeted, 75 State Department employees resigned, went to work for the Environmental Protection Agency and then got jobs as Uber drivers to deliberately upcharge people who were attending immigration protests.

The Nazi Steve Bannon has repeatedly stated in his podcast that his intention is to destabilize Western civilization in order to get Breitbart News added to the White House press pool. “I am Darth Vader, Satan, Roy Cohn, Jafar from 'Aladdin,' Dick Cheney, Nostradamus, Karl Marx, Bad Santa, Thomas Cromwell, Rasputin and Robbie Rotten from ‘Lazy Town’ all mixed together into a toxic stew,” he has said. “Let us reap the whirlwind of the Fourth Turning, make children cower in fear and also allow Congress to deregulate the mining industry.”

Russia did what it did and will continue to do what it does. Meanwhile, the White House Press Office will only answer questions for two or three hours a day. This is part of an active campaign to repress Muslims, Latinos, black people, trans people, lesbians, straight women, the educated, men with mustaches, journalists, Hollywood producers, the self-employed, the hosts of “Top Chef” and especially the heroic resisters in the tech and startup fields. We must investigate constantly until we no longer are allowed to move freely within our own borders. That day will occur soon, according to an article in Teen Vogue, which continues to crush it, day in and day out.

It is obvious that a coup is underway, about to become underway, or may in fact already be over. We have taken the blue pill and the red pill and have fallen down the rabbit hole all the way to the bottom of the well. When the truth is found to be lies, and all the joy within you dies, the Department of Homeland Security is already colluding with the Department of Motor Vehicles to deport you.

It becomes very clear what is going on if you only pay attention. I will explain.