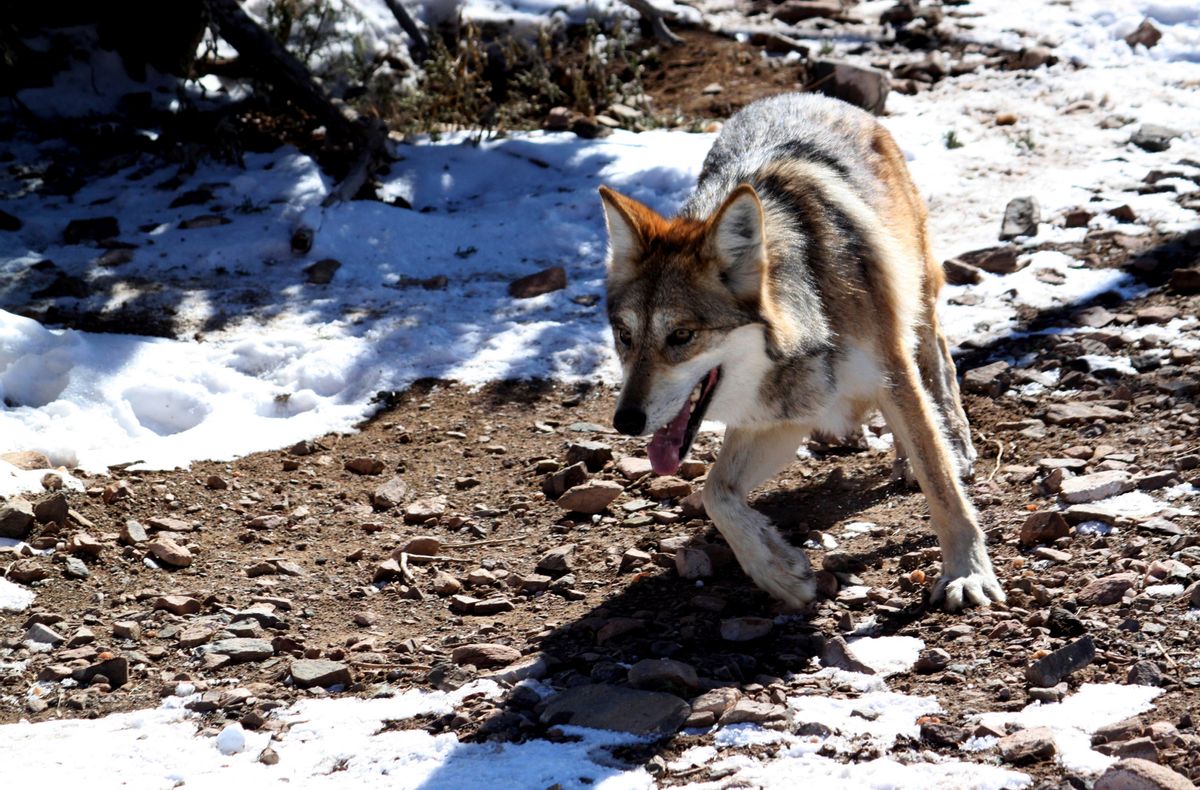 FILE - In this Dec. 7, 2011, file photo, a female Mexican gray wolf at the Sevilleta National Wildlife Refuge in central N.M. Republicans in Congress are readying plans to roll back the reach of the Endangered Species Act after decades of complaints that it hinders drilling, logging and other activities on public lands. Over the past eight years, GOP lawmakers sponsored dozens of measures aimed at curtailing the landmark law or putting species such as gray wolves and sage grouse out of its reach. Almost all were blocked by Democrats and the White House or lawsuits from environmentalists. () (AP Photo/Susan Montoya Bryan, File)
--

ALBUQUERQUE, N.M. — There are now more Mexican gray wolves roaming the American Southwest than at any time since the federal government began trying to reintroduce the predators nearly two decades ago.

The annual survey released Friday by the U.S. Fish and Wildlife Service shows at least 113 wolves are spread between southwestern New Mexico and southeast Arizona, marking an improvement over the 97 wolves that were documented the previous year.

"We are encouraged by these numbers. But these 2016 results demonstrate we are still not out of the woods," Fish and Wildlife Service regional director Benjamin Tuggle said in a statement. More work needs to be done to ensure the population grows by about 10 percent each year, Tuggle said.

The survey comes as the agency gathers comments on plans to release two packs of Mexican gray wolves in wilderness areas near the Arizona-New Mexico border this year in an effort to bolster a struggling population threatened by inbreeding.

The Fish and Wildlife Service released details this week of its latest plan, saying it will submit the public comments along with a request to the state of New Mexico for a permit to release the animals.

It will ultimately be up to New Mexico and a federal court whether the releases happen because the state and the agency are locked in a legal battle over the endangered predator, marking just the latest skirmish in a broader fight over states' rights and the Endangered Species Act.

In a case before a federal appeals court, New Mexico and 18 other states argue that the law requires the Fish and Wildlife Service to cooperate with them on how endangered species are reintroduced within their borders. Federal attorneys contend the law allows the agency to go around a state, if necessary, to save a species.

The court has yet to make a ruling, and until then releases in New Mexico are prohibited.

New Mexico contends there's no way to determine whether the proposed releases would conflict with the state's own wildlife management because federal officials have yet to develop a comprehensive recovery plan for the wolves.

The agency is under a court order to release a draft plan later this year.

Federal officials say the releases are an important tool for avoiding a genetic bottleneck. Of the 70 or so Mexican wolves in the wild for which individual genetics are known, all but four males are descendants of the Bluestem Pack's breeding female.

Without releases from the more genetically diverse captive population, "there is very little potential for natural pair formation among unrelated wolves in the wild now or in the future," wolf managers stated.

Their plan also calls for more cross-fostering of pups, which involves placing captive-bred pups in the dens of wild wolves with the intention that the pack's adults would raise them as their own. Last year marked the first successful cross-fostering attempt with a litter in New Mexico.

According to the survey, 50 wild-born pups survived in 2016 compared with half that the previous year.

In all, officials reported a total of 21 packs with at least 50 wolves in New Mexico and 63 wolves in Arizona.

A subspecies of the gray wolf, Mexican wolves nearly disappeared in the 1970s. The federal government added them to the endangered species list in 1976.

The Fish and Wildlife Service began reintroducing the wolves in New Mexico and Arizona starting in 1998, but the effort has been hampered by everything from politics to illegal killings and genetics. The agency has been criticized for its management of the predators by both ranchers, who say the animals are a threat to their livelihoods, and environmentalists who want more captive-bred wolves to be released.

From The Wires Mexican Gray Wolf Southwest Us Fish And Wildlife