Out of darkness, light: Will the Trumpian nightmare lead to a real "political revolution" after all?

Slavoj Žižek argued Trump would be better for the left than Clinton — and if we survive this, he might be right 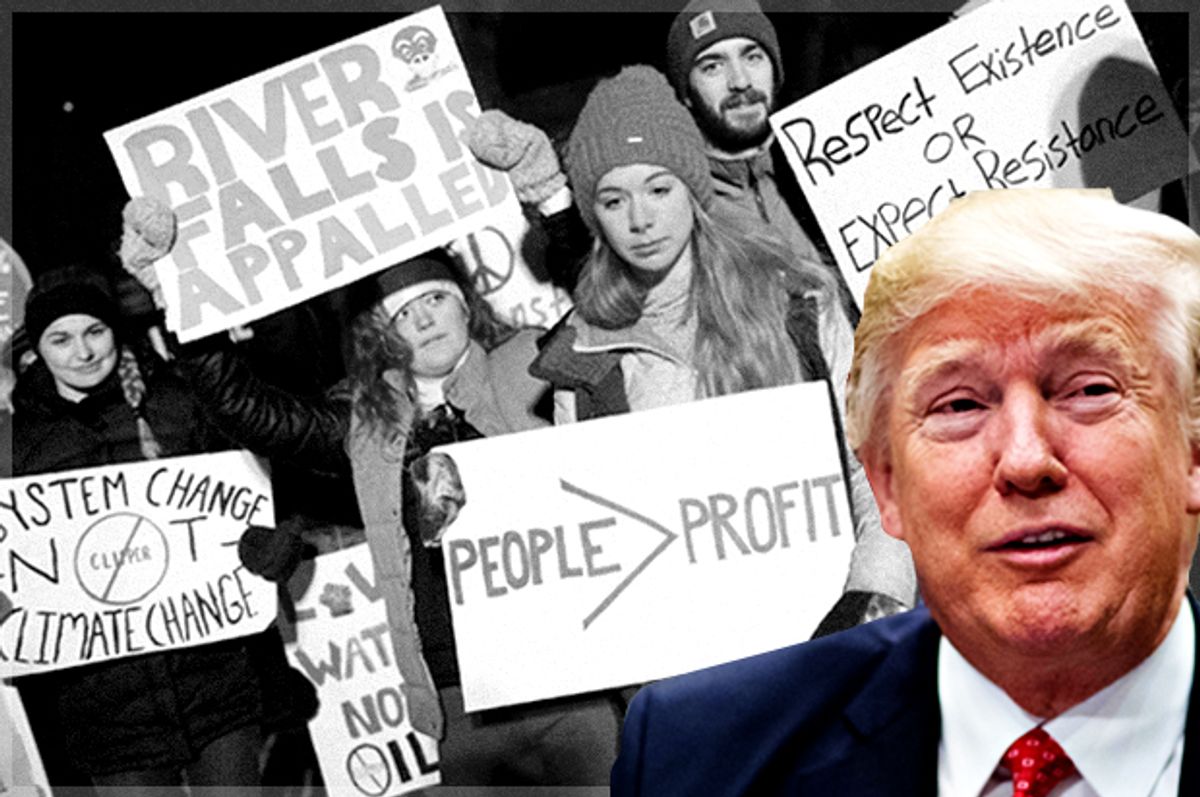 Last November, the Marxist philosopher Slavoj Žižek turned a lot of heads when he announced shortly before the 2016 presidential election that if he were American, he would vote for Donald Trump over Hillary Clinton — not because he thought Trump was the lesser evil, but precisely because he was the greater evil.

The Slovenian intellectual’s hope was that the election of a vulgar, right-wing extremist like Trump would “be a kind of big awakening” that would trigger “new political processes” in America. In other words, with a reactionary demagogue as transparently abhorrent and dangerous as Trump in the White House, a popular movement on the left would emerge to challenge not only Trump’s reactionary populism, but the neoliberal status quo that had long prevailed in Washington. Clinton, argued Žižek, stood for an “absolute inertia” that would stifle a populist movement on the left, and while there was great danger in a Trump presidency, there was also great danger in electing Clinton — especially in the long run.

This was obviously a controversial — and very Žižekian — opinion that most on the left did not espouse. One of the most prominent leftist intellectuals of our time, Noam Chomsky, called it a “terrible point,” remarking that “it was the same point that people like him said about Hitler in the early ’30s.” Chomsky means the German Communists, who in the early 1930s were more critical of the reformist Social Democratic Party — which they preposterously labeled a “social fascist” party — than they were of the Nazis.

“The left could have been organized to keeping [Clinton’s] feet to the fire,” noted  Chomsky in an interview with Al Jazeera. “What it will be doing now is trying to protect rights ... gains that have been achieved, from being destroyed. That's completely regressive.”

While Chomsky is absolutely correct — the Trump administration’s assault on civil liberties, democracy and the Constitution has only just begun, and the left will be on the political defensive for the next four years — Žižek’s point was perhaps not quite as far off as as Chomsky believed.

Shortly before the election, many people wondered what would become of the far-right populist movement that had been energized under Trump after the election, which most assumed he would lose. It is doubtful that it would have just withered away, as many liberals no doubt hoped. With Clinton in the White House, the Democrats would have been at a clear disadvantage in both the 2018 midterm elections and the 2020 elections (think of the Obama backlash during the 2010 midterm elections, and then consider how much more well-liked Obama was than Clinton).

This is particularly important when you consider that 2020 is a census year, which means that the party that comes out on top will have greater control of redrawing district lines across the country. The GOP has been able to maintain control of the House since 2010 in large part because of the extreme gerrymandering that was implemented after the 2010 Obama backlash — and in four years the winning party will have similar power (currently, Republicans control state legislatures in 24 states, while Democrats only control five).

Of course, this is still some distance away, and a lot can happen in the interim. Though we are just one month into Trump’s term, his presidency has already surpassed all recent predecessors in scandal and controversy, and the dysfunction is palpable. At times it is hard to imagine how the United States can survive another 47 weeks of this unhinged and extremist administration. While many had hoped that Trump would curb his divisive rhetoric as president and take a more pragmatic approach to governing, the exact opposite has occurred, and it is now clear that fanatics like Steve Bannon and Stephen Miller are running the show (and that Trump’s erratic, impulsive and thin-skinned personality cannot be controlled).

Thus, Chomsky’s pessimism was well-founded when he said that the government is now in the hands of the “most dangerous organization in world history.”

At the same time, it appears that some of Žižek’s hopes are materializing as well. The clearest example of this was the massive Women’s March in Washington — along with hundreds of sister marches across the country — the day after Trump’s inauguration. According to various political scientists, it was the single largest day of protests in American history — and peaceful demonstrations have continued ever since.

Trump’s controversial executive orders and cabinet picks have led to a sustained grassroots resistance in the first month of his presidency, and it is unlikely to die down anytime soon. Moumita Ahmed, who founded the Facebook group “Millennials for Revolution” (originally “Millennials for Bernie”), recently told CNN that she believes this is “not just the beginning of the 'tea party of the left' but a larger movement for civil rights that could make history,” and that the protests will “continue and get bigger and bigger.”

As long as Trump is in the White House, the demonstrations are likely to grow. What remains unclear is whether this grassroots resistance will be as effective in shaping electoral politics as the Tea Party was back in 2010 — and whether the Democratic Party will be as welcoming to the populist left as the GOP was to the populist right.

The current tension between progressive activists protesting on the street and the Democratic establishment was displayed by an interesting exchange last week between House Minority Leader Nancy Pelosi and an NYU student at a CNN town hall. After pointing out that a majority of millennials no longer support the capitalist system, the young student asked Pelosi whether she felt that the Democratic Party could “move farther left to a more populist message, the way the alt-right has sort of captured this populist strain on the right wing,” and if the Democrats “could make a more stark contrast to right-wing economics?” The question — or, more explicitly, the statement that young people are rejecting capitalism — made Pelosi visibly uncomfortable, and the congresswoman felt it necessary to emphasize the Democratic Party's loyalty: “I have to say, we’re capitalist ― and that’s just the way it is.”

This is understandable — after all, the Democratic Party does support capitalist party, and the House minority leader can’t be expected to make radical pronouncements. But Pelosi was so concerned with defending the sanctity of capitalism that she failed to answer whether the Democrats could or should espouse a more populist economic message, akin to the social-democratic platform that nearly carried Bernie Sanders to victory over Clinton.

That kind of Democratic resistance to economic populism is making many progressives question whether the party is ready to lead a viable resistance against right-wing populism. Some progressives are starting to join other left-wing organizations like the Democratic Socialists of America (DSA).

Of course, it is a truism in American politics that third parties are not viable alternatives if the goal is to succeed in electoral politics — and as long as there is a winner-takes-all system in place, this will obstinately remain true. The pragmatic approach for the populist left is to work to transform the Democratic Party itself, as groups like Brand New Congress and Justice Democrats have set out to do, while sustaining a popular movement on the ground.

Likewise, the pragmatic approach for the Democratic leadership is to embrace the growing grassroots left and combat Trump-style populism with their own anti-establishment message. With a historically low approval rating, Trump is already the most unpopular president in modern history, and his party is now the “establishment.” That means the Democrats will have the perfect opportunity to lead a popular and successful resistance in 2018 and 2020 if they can adopt a compelling populist message of their own.

With the many profound crises that currently face humanity, there are plenty of reasons to be pessimistic about the future. The worst-case scenario is that the Trump presidency could sound a “death knell for the human species,” as Chomsky put it last year. But if we are lucky enough to avoid World War III, this nightmare could also bring about the “big awakening” that Žižek imagines -- and could trigger a popular movement to reverse the damage that has been done over the past 50 years. 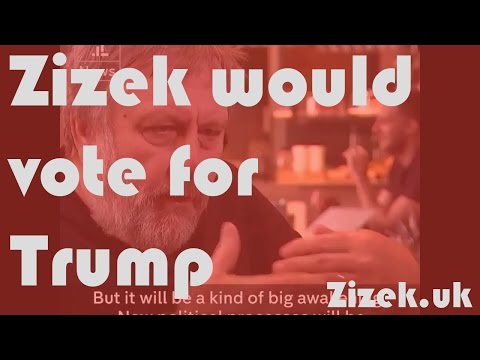