Trump, Putin and Flynnghazi: The president's apparent reversal on Russia and Crimea isn't all that hard to understand

Trump suddenly wants to look tough on Russia amid the atmosphere of deepening scandal. Don't expect it to last 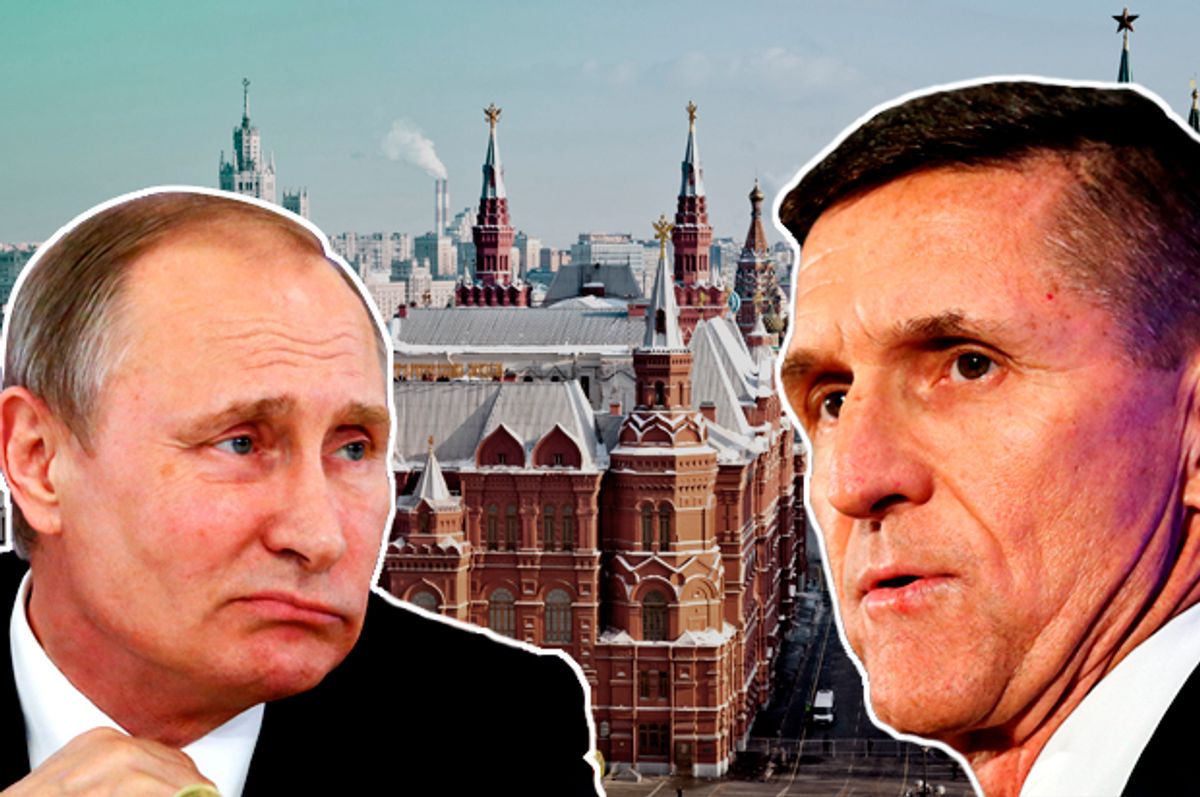 While the aftershocks of Flynnghazi continue to roil Washington, something has changed in the Trump administration’s policy toward Russia. Candidate Trump famously promised to review the status of Crimea, reassess American commitments to NATO and look into weakening the sanctions on Russia. He rarely talked about Ukraine and his team weakened language in support of the Kiev government in the Republican Party platform.

But last week, U.S. ambassador Nikki Haley told the United Nations that “the United States continues to condemn and call for an immediate end to the Russian occupation of Crimea ... Crimea is a part of Ukraine. Our Crimea-related sanctions will remain in place until Russia returns control over the peninsula to Ukraine.”

Presidential press secretary Sean Spicer echoed these remarks: “President Trump has made it very clear that he expects the Russian government to de-escalate violence in the Ukraine and return Crimea.” Even Trump tweeted: “Crimea was TAKEN by Russia during the Obama Administration. Was Obama too soft on Russia?”

In a delicious irony, Russian foreign policy elites bemoaned the lack of democratic accountability in the U.S. One Russian senator noted: “This differs from his [Trump’s] promises, including thinking about recognizing Crimea. But, as you can see, it does not always correspond to what he does afterwards.”

Many foreign policy elites in the U.S. and Europe will welcome the change in tone, but this reversal simply reveals the weak moorings of Trump’s policy toward Moscow. This flip-flop is especially striking because Russia policy was one of the few areas in which Trump pursued a consistent line during the election campaign. Yet less than a month into his new administration he appears to be drastically changing tone.

On one level, it is hard to take this rhetorical U-turn seriously. As recently as Jan. 17, Trump noted that he would be willing to remove sanctions in exchange for the vague promise of better relations with Russia, noting: “If you get along and if Russia is really helping us, why would anybody have sanctions if somebody's doing some really great things.”

This reversal can easily be dismissed as an attempt to ward off congressional attempts to tie Trump’s hands on Russia policy. Efforts are underway in both the Senate and the House to introduce legislation that would require congressional approval for any removal of the sanctions against Russia. Taking a harder line on Russia, or at least appearing to, might slow momentum to pass this legislation.

More generally, the Trump team is trying to obscure the impression that it ever made any implicit or explicit deal with Moscow: You help us during the election by leaking material on Hillary Clinton and we will pay you back with changes in policy. Changing the narrative on Russia has become even more important in the wake of new leaks from the U.S. intelligence community suggesting there were repeated contacts between Russian officials and members of the Trump campaign before the election.

This reversal in tone will have consequences beyond public relations because of the mixed message it sends. The tougher rhetorical stance will hardly reassure Russia hawks like Sens. Lindsey Graham and John McCain, who would like to see the sanctions remain in place until Russia fulfills its obligations by recognizing the sovereignty of Ukraine over the Donbas.

In addition, "Russia doves" who would like to see sanctions lifted as quickly as possibly can only be worried by this change in tone. Moreover, when Trump eventually returns to the idea of lifting sanctions on Russia, which he surely will, his credibility on the issue will have been damaged by these statements.

It will take more than changes in tone to soothe skittish allies in Europe, who have far more at stake given their greater commercial ties with Russia and closer geographic proximity to Russian forces. It is hard to see how these rhetorical flip-flops can produce anything but confusion among our allies in Europe, however hard Secretary of State Rex Tillerson works to reassure them.

Russia too is hedging its bets on the Trump administration’s possible change of course. The Kremlin told its state-controlled media to cut back on the fawning coverage of Trump. More colorfully, the Russian tabloid Komsomolskaya Pravda wrote: “You need to be drunk to understand the U.S. president’s true position (on NATO).”

In the wake of this confusion, the Kremlin continues to probe Washington’s resolve. In the last two weeks we have heard of a Russian fighter jet buzzing an American aircraft carrier, the discovery of a new Russian missile that may be in violation of a long-standing arms control agreement and the intensification of fighting in eastern Ukraine.

These actions have provoked little response from the White House. We can expect such things to continue until the Trump administration commits itself to a serious Russia policy.

Timothy Frye is chair of the political science department at Columbia University and writes on politics, economics and Russia.