Trump's entire campaign was a bait-and-switch: Washington's a mess, and it's all the president's fault

Trump's showing himself to be about the most inept, disorganized, sloppy, incompetent president in recent memory 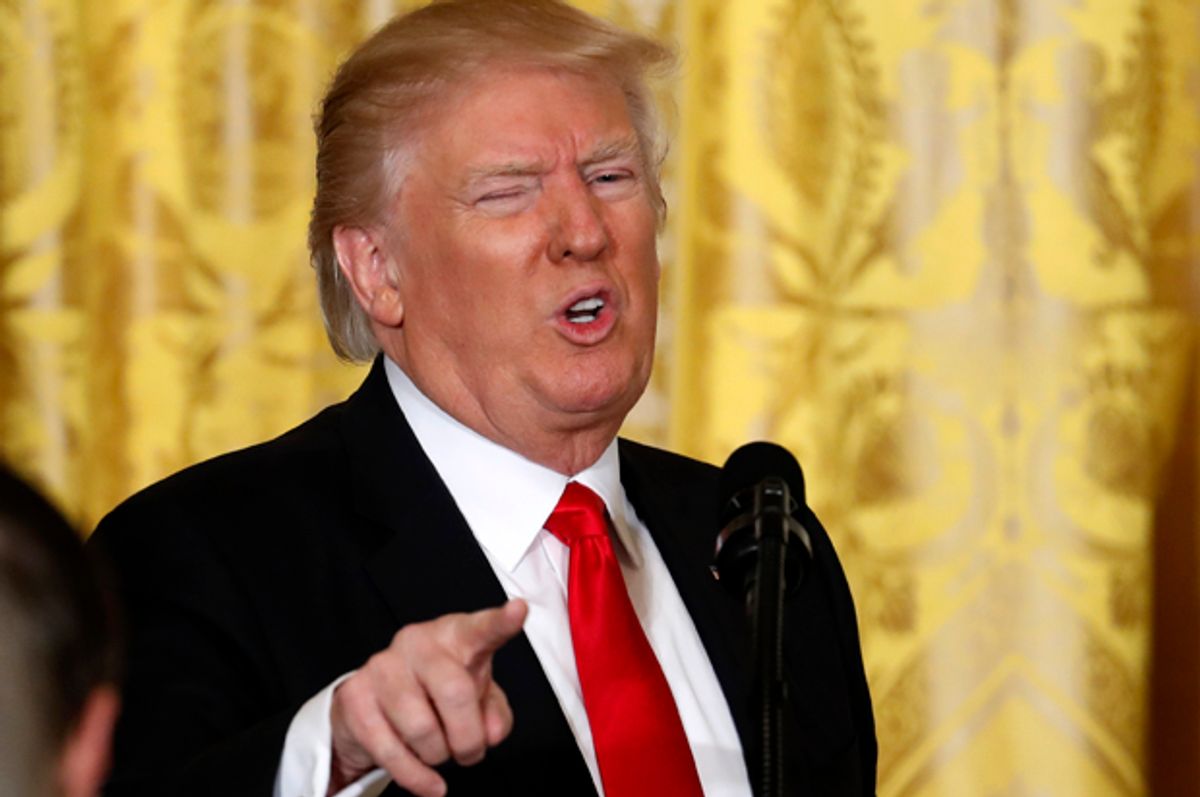 Donald Trump sold himself to voters as a successful businessman who knew how to get things done, a no-nonsense manager who’d whip the government into shape.

But he’s showing himself to be about the most inept, disorganized, sloppy, incompetent president in recent memory, with a nearly dysfunctional White House.

He allowed Michael Flynn to hang on until the last minute. In any halfway competent administration, Flynn would have been gone the moment it became clear he lied to the vice president about his contacts with Russia.

Sean Spicer is a joke, literally. His vituperative, vindictive press conferences are already rich food for late-night comedy. In a White House that had any idea what it means to be an effective press secretary, Spicer would be out the door.

The Muslim travel ban was totally bungled — unclear, haphazard and badly thought out. Trump complains that "his people didn’t give him good advice," but the people most directly responsible for it — Stephen Bannon and Stephen Miller — have only gained more power in the White House.

Meanwhile, Trump’s White House has sprung more leaks than any in memory. Aides are leaking news about other aides. They’re leaking examples of Trump’s incompetence and weirdness. They’re leaking the contents of telephone calls to other heads of state in which Trump was unprepared, didn’t know basic facts and berated foreign leaders.

Chief of Staff Reince Priebus seems to have no idea what's going on. A White House official complained to The Washington Post, “We have to get Reince to relax into the job and become more competent, because he’s seeing shadows where there are no shadows.” Trump’s buddy Chris Ruddy described Priebus as being “in way over his head.”

Infighting is wild. Rumors are swirling that Kellyanne Conway wants Priebu’s job, that Stephen Miller is eyeing Spicer’s job, and that no one trusts anyone else.

The New York Times reports "chaotic and anxious days inside the White House’s National Security Council." Council staff read Trump’s tweets and struggle to make policy to fit them. Most are kept in the dark about what Trump tells foreign leaders in his phone calls.

Trump himself is remarkably sloppy with sensitive national security information. For example, last weekend he discussed North Korea’s latest missile launch on a mobile phone at his table in the middle of Mar-a-Lago’s private club’s dining area within earshot of private club members. A guest at the club even posed with the military aide who carries “the football” (the briefcase containing instructions for authorizing a nuclear attack).

The U.S. intelligence community is so convinced that Trump and his administration have been compromised by Russia that they’re no longer giving the White House all of their most sensitive information, lest it end up in Putin’s hands.

A senior National Security Agency official said the National Security Agency is systematically holding back some of the “good stuff” from the White House, fearing Trump and his staff can’t keep secrets. The intelligence community is concerned that even the Situation Room — the room in the West Wing where the president and his top staffers get intelligence briefings — has been compromised by Russia.

The White House mess is Trump’s own fault. He’s supposed to be in charge, but it turns out he’s not a tough manager. He’s not even a good manager. He seems not to have any interest in managing at all.

Instead of whipping government into shape, he’s whipping it into a cauldron of dysfunction and intrigue.

Just like his promises to “drain the Washington swamp” and limit the influence of big money, get Wall Street out of policy making and turn government back to the people, Trump’s promise of an efficient government is another giant bait-and-switch.