Trump's gift to Wall Street: When it comes to bank regulations, there's nobody better to consult than bankers themselves 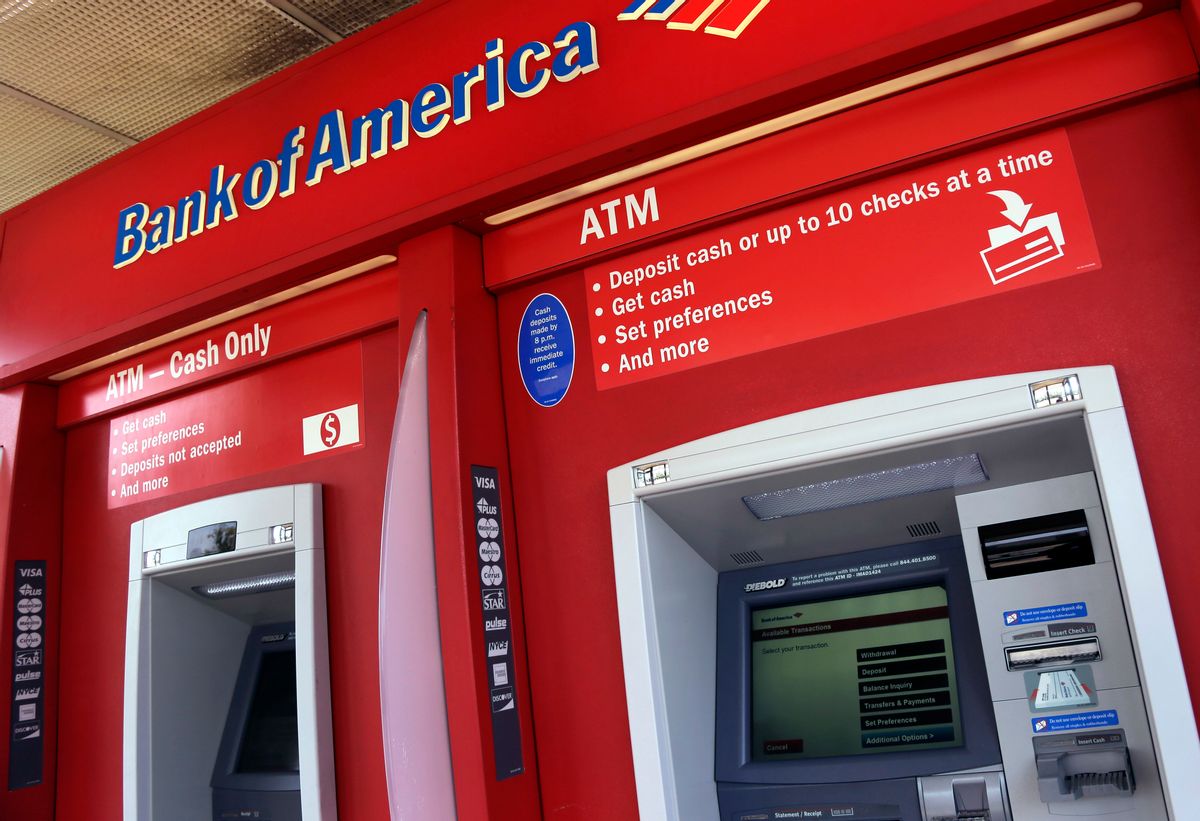 “There’s nobody better to tell me about Dodd-Frank than Jamie,” President Trump said at a meeting with JP Morgan CEO Jamie Dimon earlier this month. “I have so many people, friends of mine, that have nice businesses and they can’t borrow money . . . because of the rules and regulations and Dodd-Frank.”

Trump’s assertion that businesses can’t get credit — one often heard from conservative opponents of Dodd-Frank — is, economist Dean Baker notes, not reflected by actual surveys conducted by business groups, but never mind that: The regulatory rollback is poised to move forward, championed by the financial industry alumni in Trump’s Cabinet and the current financial titans who so closely have Trump’s ear.

Dimon, along with hedge fund CEO Larry Fink and private equity magnate Stephen Schwarzman, among others, was in town to meet with Trump about jobs, the economy and Wall Street. On the campaign trail, Trump pledged to make his decisions after consulting the “best people,” and, apparently, these were them. (In The New York Times, Roosevelt Institute fellow Mike Konczal noted that the president did not make a similar show of seeking advice from regulators, small businesses or community banks.)

Later that day, with his new economic adviser Gary Cohn — until recently the COO of Goldman Sachs — by his side, Trump signed an executive order that begins the process of tossing out the post-crisis Obama-era reforms that Republicans and Wall Street bankers have long despised.

Many of the regulations that Republicans want to undo were put in place as safeguards following the 2008 financial crisis. Trump’s Feb. 3 executive order instructs the administration and its Republican compatriots in Congress to start thinking about how they’d like the financial system to change.

Members of Congress have already been making plans. Jeb Hensarling, a Texas congressman who chairs the powerful House Financial Services Committee, is leading the effort to scale back the broad regulations. Big business sees Hensarling as a valuable ally — demonstrating their appreciation for him by pledging millions in campaign donations every year, even though, for the last two cycles, his district has not had a Democratic Party challenger.

Although Trump and Hensarling seem to be getting advice from some of the same people, they have at times sent different messages on the changes they’d like to see. They will, however, have to work together to put in place some of the major changes to Dodd-Frank that Republicans have been considering. Here are some financial regulations that could be on the chopping block in 2017.

The rule, which was scheduled to go into effect this April, requires financial advisers to put their clients’ best interests first when investing their retirement money. Many companies and advisers already do that, but because there was no rule in place, some took advantage, receiving fees and other kickbacks, such as lavish vacations, in return for recommending certain investments to clients. Last week, the office of Sen. Elizabeth Warren released a report that estimated these conflicts of interests cost “Americans saving for their retirement $17 billion a year.”

The rule, in particular, infuriated the private equity industry. As David Dayen explained at the Intercept, the rule essentially made retirement money off-limits to the industry, which depends on people gambling on risky investments. “That the fiduciary rule, rather than any of the other things Dodd-Frank does, is President Trump’s first target demonstrates that the administration is giving priority to the donor class, which has obsessed about the rule for years,” noted the Roosevelt Institute’s Konczal.

Of the many elements of the 2,300-page Dodd-Frank legislation, the Consumer Financial Protection Bureau has perhaps had the most visible impact. Among its successes are crackdowns on shady practices by mortgage issuers, debt buyers, credit card companies and for-profit colleges that scam students. Last year’s revelations about Wells Fargo’s practice of secretly opening accounts for customers resulted in the bank being hit with a $100 million fine from the CFPB — the biggest penalty issued by the agency so far.

There are several ideas kicking around Washington for how to defang this watchdog agency. One is to have its funding run through Congress instead of the Federal Reserve. This would allow legislators, some of whom receive campaign donations from credit card companies or payday lenders, to control the agency’s budget. Another is to replace the director of the CFPB with a bipartisan panel. This idea, which banking lobbyists have been pitching to both parties in recent days, would make the CFPB similar to other government agencies where disagreement among commissioners produces gridlock and inaction.

In the meantime, Hensarling already has called for the agency’s current director, Richard Cordray, to be fired. Congress is also attacking specific rules rolled out by the CFPB, such as one limiting overdraft fees.

Following the last financial crisis, bank regulators have been conducting “stress tests” to make sure that large banks would be able to survive future market shocks or another financial meltdown. These tests are controversial — some bank CEOs agree with regulators that they help shore up the financial system, but others complain that they are onerous, and some Republican legislators have taken up their cause.

In a memo released last week, Hensarling said he wants to make the tests less frequent — every other year instead of annually — and allow banks to opt out entirely if they are willing to increase the amount of money they have on hand. (The increase he wants, however, would still not go far enough to protect customers, according to research by economist Anat Admati at Stanford, summarized well at the American Prospect.) Hensarling would also like to get rid of part two of the stress test — sometimes called the “qualitative test.” After a bank’s capital requirements are measured, bank examiners assess the bank’s understanding of its own risk. Some banks dislike the amount of subjectivity this allows regulators, and Hensarling proposes doing away with it.

Other legislators, like Pennsylvania Republican Sen. Pat Toomey, want to get rid of the stress tests entirely.

One of the simplest components of Dodd-Frank, this rule, set to go into effect in 2018, would make companies disclose the difference between what employees make and what their CEO makes. Long championed by Sen. Warren, the rule would help bring into focus the wide pay disparities that often exist between company management and regular workers.

CEO pay has ballooned in recent decades. Although companies haven’t had to disclose data yet, journalists and think tanks have done some calculations based on publicly available information. For example, the Economic Policy Institute, a labor-aligned think tank, finds that in 2016 the average CEO made 276 times the average American worker. As a point of comparison, in the late 1970s that figure was around 30 to 1.

The Securities and Exchange Commission dragged its feet for years on writing the rule, eventually finalizing it in 2015, five years after Dodd-Frank became law — and still, the rule won’t go into effect until 2018. Now, the acting head of the SEC, Republican Michael Piwowar, has asked his agency’s staff to reconsider the rule, meaning, Zach Carter writes at the Huffington Post, “the rule is dead.”

The Volcker Rule and the Glass-Steagall Act

Bloomberg reports that the Volcker Rule is also in Trump’s crosshairs. That’s somewhat ironic, because the Volcker Rule was widely seen as a partial replacement for the Glass-Steagall Act — a 1933 law that was repealed in the 1990s but that Republicans and Trump’s advisers have recently suggested they support.

The Glass-Steagall Act was put in place after America plummeted into the Great Depression. It separated commercial banks from investment banks. This means that the part of the bank that was holding customers’ money and making loans to them was not also making complicated investments in the market. The act was repealed in 1999, an event that many credit as a bellwether moment, freeing banks to gamble with customers’ money and fueling a risk-taking culture that contributed to the 2008 financial crisis. The potential for a new Glass-Steagall Act was fiercely debated within the Democratic Party during the primaries, with Bernie Sanders promising to reinstate it and Hillary Clinton pushing to keep the Volcker Rule and other rules she argued would work better. The Volcker Rule bans banks from risky speculative trading with federally insured money.

Republicans, by contrast, didn’t say much about financial regulation during their primary, and Trump and his team have sent mixed messages on this. Bloomberg reports that Trump did not feel the Volcker Rule “addressed real issues in the financial system.” Yet the Republican Party platform rolled out before the Republican Convention last summer called for a new Glass-Steagall. And as of January, Treasury Secretary Steve Mnuchin was saying a “21st century Glass-Steagall” made sense, and that the Volcker Rule was useful.

Not all of these changes will be able to roll forward with a stroke of Donald Trump’s pen. Some will be more complicated; major changes to Dodd-Frank will need congressional approval. That means Democrats will have a chance to oppose them.

But the president has the power to undo other banking regulations, as David Dayen explained in the Nation. The White House can instruct agencies to simply not enforce certain rules. Other aspects of Dodd-Frank — like the fiduciary rule and the CEO pay ratio rule — have not yet gone into effect, and the Trump administration can order the agencies that oversee these rules to reverse course. Roughly a quarter of the rules called for under Dodd-Frank have still not yet been written, giving the Trump administration the opportunity to drag the process out further.

What’s clear is that as the deregulatory process moves forward, the fox is guarding the henhouse. Despite his populist campaign rhetoric, President Trump is listening to Wall Street titans. His Cabinet is stocked with Goldman Sachs alumni who likely remember their former employer fondly. (Gary Cohn received a $285 million bonus when he graduated from bank COO to presidential adviser.) When it comes to regulating the banks, Trump believes there is “nobody better” to consult than the bankers themselves.