Don't think about (contagious) elephants: Whose job is it to combat and contain tuberculosis? 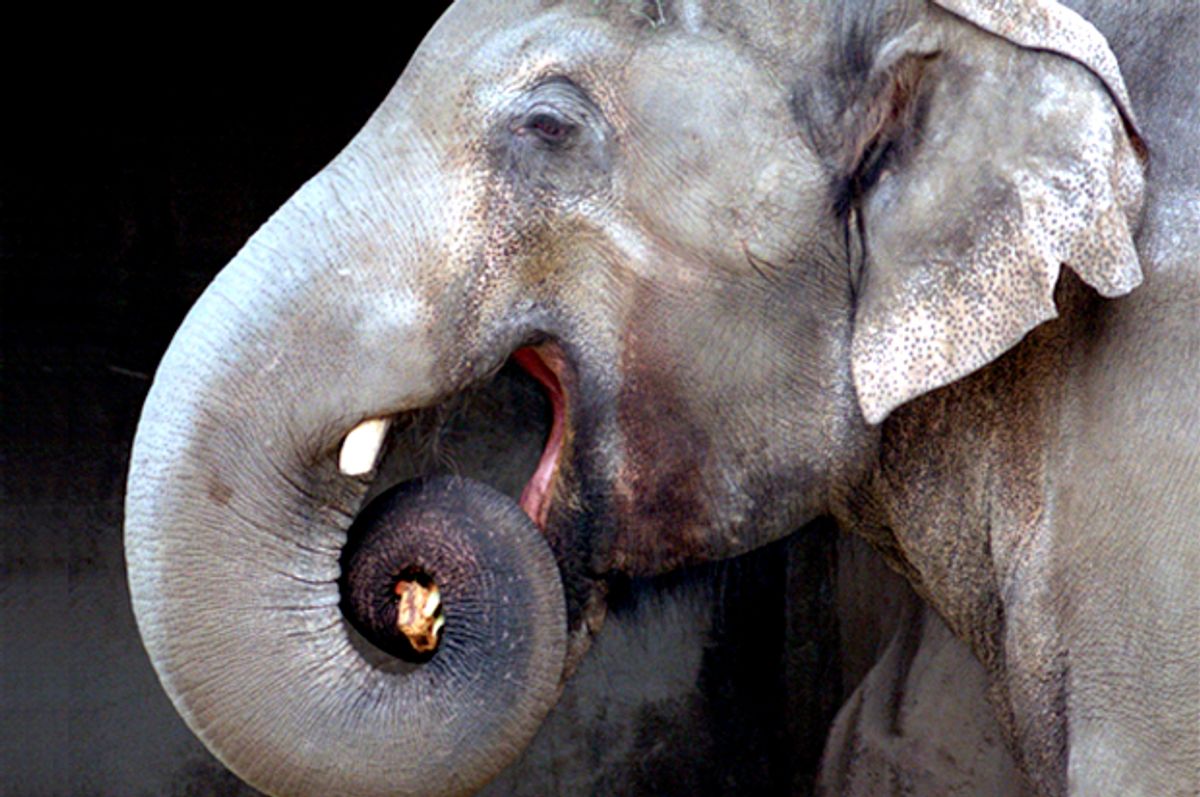 As animal lovers mourn the death of iconic Oregon Zoo elephant Packy, who was euthanized because he carried drug-resistant tuberculosis, while also fighting against the Department of Agriculture’s recent assault on transparency, we’d be wise to consider the links between the two seemingly disparate events. Packy’s unnecessary death should be a wake-up call about elephant-borne TB, and we should honor Packy by demanding that the Department of Agriculture do its job and address this serious issue instead of protecting the industries that own — and some that exploit — these animals.

Packy wasn’t the only elephant at the Oregon Zoo to contract TB. Last year, seven people were diagnosed with tuberculosis after being around infected elephants at the zoo. Other zoos across the country have struggled with the disease, including the Little Rock Zoo, National Zoo, Oklahoma City Zoo, St. Louis Zoo and Rio Grande Zoo. Virtually every American circus with elephants has a history of tuberculosis. Nine individuals contracted tuberculosis from a former circus elephant at a Tennessee refuge.

According to experts, tuberculosis is harbored by at least 18 percent of the Asian elephants in the United States — and 18 to 50 percent of Americans who work around elephants.

Many may think of tuberculosis as a disease of the past — I did myself, until two of my family members contracted the disease. But according to the Centers for Disease Control and Prevention, TB is a “pandemic, highly contagious disease” affecting up to one third of humans on the planet and killing more people than HIV and AIDS. It is on the rise in America for the first time in 23 years.

The CDC says there is a “substantial need” for better infection control practices to reduce TB transmission by captive elephants, and for “improved TB screening methods for elephants . . . to prevent exposure to humans.” The Department of Agriculture has also recognized the need for tight requirements for monitoring tuberculosis in elephants. Strong regulations, the Department had said in December 2012, in a fact sheet that's no longer available on its website, “provide the best approach for detecting and preventing the spread of TB.”

Given these statements, one would think the federal government would be tightly limiting exposure to elephants known to carry the disease.

Nothing could be further from the truth. Instead, after nearly two decades of regulating elephant-borne tuberculosis and promising that it was finalizing stricter rules, the Department of Agriculture did a complete 180 and announced — with virtually no explanation — that it would no longer require any testing or treatment for elephant-borne TB. In an Orwellian move, it even erased prior statements from its website recognizing the importance of stronger regulations. This move is remarkably similar to the agency’s deletion just weeks ago of thousands of records informing Americans of how elephants and other animals in this country are being treated. Indeed, the now-deleted records included information about elephants carrying TB.

When questioned by an attorney with the PETA Foundation in December 2015 about the agency’s about-face on elephant-borne TB, then-Secretary of Agriculture Thomas J. Vilsack suggested that the CDC bears responsibility for regulating tuberculosis in elephants, saying “concerns about the potential for zoonotic spread between TB-positive animals and humans [are] a public health issue, which States, local officials, and, on a Federal level, the Centers for Disease Control and Prevention and the Occupational Safety and Health Administration are empowered to address.”

When asked by the same PETA Foundation attorney in February 2016 to discuss the matter, the CDC said elephant-borne tuberculosis wasn’t within its purview and "these areas are better addressed with USDA."

Both agencies have the ability and responsibility to regulate elephant-borne tuberculosis. Congress entrusted both with clear and broad authority to act to protect the health of the American people and animals.

With tuberculosis at the top of the United Nation’s 2017 agenda and the World Health Organization urging countries to do more to address the disease, federal agencies must set aside finger-pointing and address this serious issue. Until they do, animal exhibitors will continue to expose Americans to tuberculosis.