It's time to put food policy back on the table 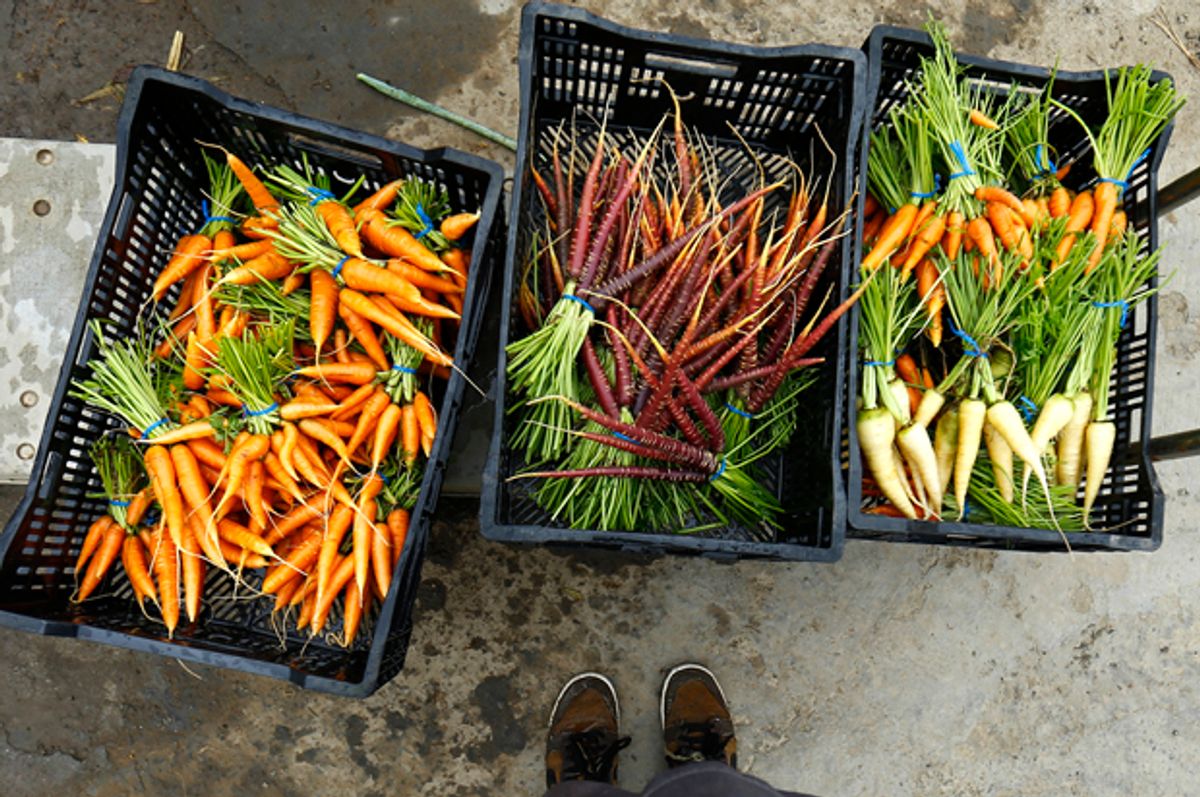 During the farm crisis of the 1980s, an Iowa farmer asked if I knew the difference between a family farmer and a pigeon. When I said no, he delighted in explaining, "A pigeon can still make a deposit on a new John Deere."

That's funny, except that it really isn't. Worse, the bitter reality of the tractor joke is still true: The farm crisis has not gone away, though hundreds of thousands of farm families have. The economic devastation in farm country continues unabated as agribusiness profiteers, Wall Street speculators, urban sprawlers and corrupted political elites squeeze the life out of farmers and rural America.

Remember last year's presidential debates? Donald Trump and Hillary Clinton talked about the needs of hard-hit working-class families, veterans and coal miners among others. But, hello, where were farmers? Indeed, where was the multitude of producers who toil on the lands and waters of this country to bring food to our tables? All went unmentioned, even though economic and emotional depression is spreading through their communities, thanks to bankruptcy-level prices paid by corporate middlemen. In the past three years, farm income has declined steadily, plummeting 12 percent just in  the last year. But these crucial-but-endangered food producers were totally disappeared by the political cognoscenti.

Actually, the farmer has long been forgotten in America's presidential discussion. In a New York Times op-ed, a professor, A. Hope Jahren reported on the discovery she made when reading through transcripts of past debates: "Farm policy hasn't come up even once in a presidential debate for the past 16 years."

That's the Bush-Kerry, Obama-McCain, Obama-Romney and Trump-Clinton races! Not one of them mentioned the people who produce our food. Jahren noted that the monetary value of farm production alone is nearly eight times greater than coal mining, a declining industry whose voters Clinton and Trump avidly courted.

This disregard for farmers and food policy is not only irresponsible, but also politically inexplicable when you consider that food means far more than economics to people. Purchasing food has become a political act that takes into account cultural, ethical, environmental and community values. This was confirmed in a March 2015 national survey published by Consumer Reports showing that huge percentages of shoppers consider production issues important, so that 91 percent of those polled said they supported local farmers, 89 percent voiced support for reducing exposure to pesticides in food, 88 percent stated they were for protecting the environment from chemicals and 84 percent said they were for providing better living conditions for farm animals:

Unfortunately, no matter what we the people want, most of the political class willingly surrenders farmers — and food itself — to industrial agribusiness. That would be that except for one thing: you! Far from surrendering to the "inevitability" of a corporatized food future, the great majority of Americans continue to push forth in pursuit of an alternative future of a local, sustainable, humane and tasty food system that benefits all.

The ongoing battle for our food future pits the agro-industrial model of huge-scale, corporate-run operations against the agricultural model of sustainable, community-based family farming. The big money is with the global Goliaths of corporate agriculture, but the grip the giants once had on the marketplace has been slipping as consumers and farmers (especially younger producers) are making clear that they prefer nonindustrial food. One measure of this is the contrasting fortunes of biotech as compared with organic production.

The promised "miracle" of genetically altered crops, introduced in 1994 by Monsanto, turns out to have been ephemeral. The prices of corporation-altered seeds have skyrocketed, yields from those seeds have not met expectations, planting GMO crops has forced farmers to buy more pesticides, and consumers have overwhelmingly opposed GMO Frankenfoods. Thus, fewer farmers are using the biotech industry's product: U.S. farmers cut their plantings of GMO crops by 5.4 million acres in 2015, and sales of GMO seeds fell by $400 million.

Not only does consumer demand for organically produced food keep going up, but such major producers as General Mills and Kellogg are switching to have greater use of organic ingredients. As of last June, the number of America's certified organic farms was 14,979 (a rise of more than 6 percent from a year earlier), and sales of organic products zoomed up 11 percent to $43.3 billion in 2015, about four times more than the growth in conventional food sales. This rise would have gone even higher, but the demand for organic products is now outstripping the supply. Consumers clearly want to buy more, thus creating good opportunities for new organic farmers — and a bright future for agriculture.