What happens after the next big terrorist attack? Trump is paving the way toward a terrifying crackdown

Terrorism presents a grave danger — not for the reasons Trump claims, but because it could undermine democracy 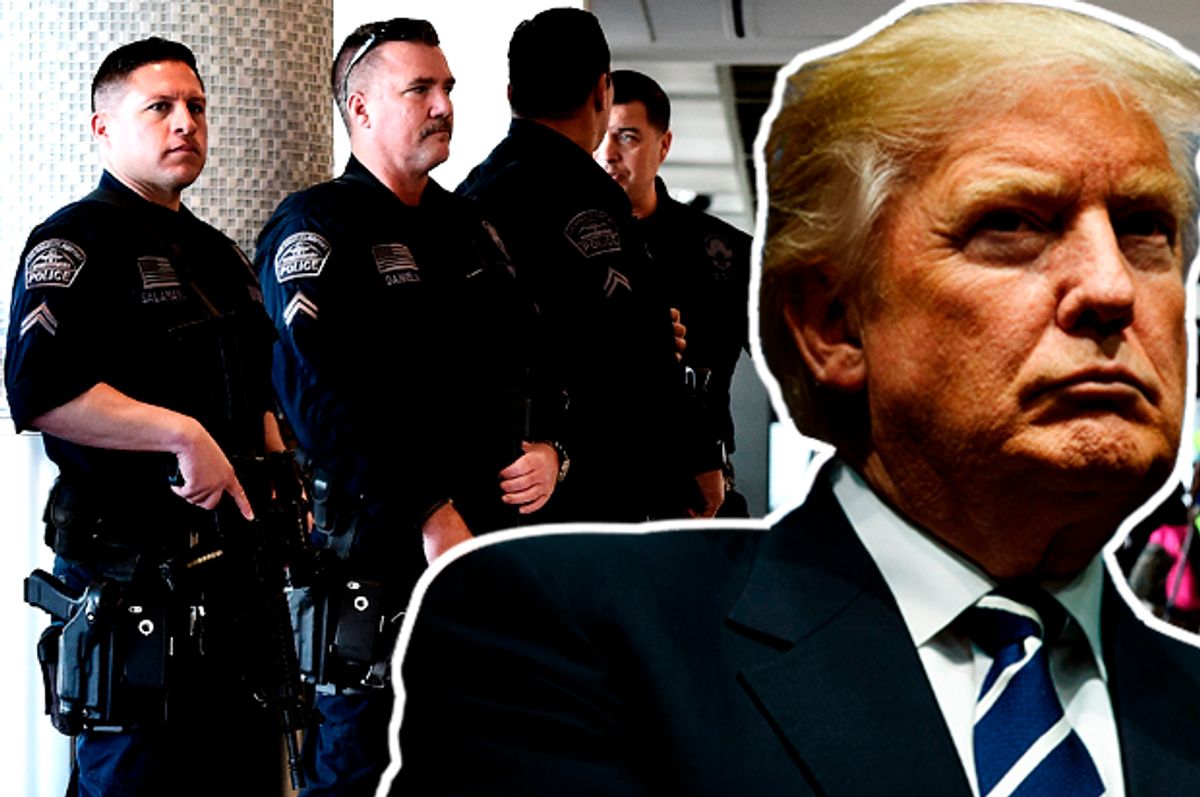 Terrorism has never been so dangerous. Even a single terrorist attack against American troops abroad or — more worrisome — a “soft target” here in the United States could have potentially catastrophic consequences for the stability and future of Western civilization.

Perhaps you’re skeptical of this claim, and you should be. After all, the average American has a greater chance of dying from a meteorite strike than a terrorist attack. But there are other reasons for considering the threat of terrorism to be greater today than at any moment since, say, the 18th century, when the word “terrorism” emerged from the French Revolution.

Consider some remarks made by our former president, that tyrannical Muslim socialist who never should have been president because he was born in Kenya. During the 2010 State of the Union address, Barack Obama said the following:

With all due deference to separation of powers, last week the Supreme Court reversed a century of law that, I believe, will open the floodgates for special interests, including foreign corporations, to spend without limit in our elections.

Many people, including conservatives, were outraged. A Republican from Utah called it “rude,” while even Sen. Russ Feingold of Wisconsin, a Democrat, described these comments as “inappropriate.” As the Washington Post put it,“legal experts [have] never seen anything quite like it, a rare and unvarnished showdown between two political branches during what is usually the careful choreography of the State of the Union address.”

The reason for such outrage is that, as the political scientist Alastair Smith notes in an interview with Salon, an independent judiciary is an absolutely critical bulwark against dictatorship. In Smith’s words, “A dictator closes down courts and gets rid of the independent judiciary." Indeed, this is what one must do to consolidate political power on the road to autocracy. Thus, any perceived challenge to the legitimacy of the courts from the executive branch is a potential threat to democracy itself.

But note how Obama couched his criticism: “With all due deference to separation of powers …” This is an explicit affirmation of the judiciary being, and remaining, an independent entity capable of “checking and balancing” the other two governmental branches.

In contrast to such careful language, though, our current authoritarian leader, Donald Trump, recently engaged in an attack on the courts that should utterly horrify every champion of democracy, whether on the left or right end of the political spectrum. First, Trump attacked the U.S. District judge, appointed by George W. Bush, who ordered a nationwide halt on Trump’s “Muslim ban,” saying, “The opinion of this so-called judge, which essentially takes law-enforcement away from our country, is ridiculous and will be overturned!”

Here Trump is attacking an individual rather than the judiciary in general. But it quickly gets worse. Several hours later, Trump decided that it was a good idea to tweet, “What is our country coming to when a judge can halt a Homeland Security travel ban and anyone, even with bad intentions, can come into U.S.?”

Perhaps it’s worth mentioning here that zero — that’s zero — Syrian refugees allowed into the U.S. through our procrustean refugee program have been involved in a fatal terrorist attack. Virtually all of the terrorist attacks in the U.S. have involved American citizens, not refugees or immigrants. And some attacks, like the recent incident in Quebec that resulted in six deaths and 19 injuries, aren’t typically even characterized as terrorist attacks, since white males who commit atrocities are almost invariably described as “mentally ill” rather than inspired by some noxious or terrorist ideology.

The most bone-chilling tweet, though, came a day later, on Feb. 5: “Just cannot believe a judge would put our country in such peril. If something happens blame him and court system. People pouring in. Bad!”

The key phrase here is “blame him and court system.” I don’t think Trump has the intellectual capacity to plot diabolical schemes — despite his claim to have one of the highest IQs in the world — but what’s taking shape here is a situation in which just one terrorist attack abroad or at home will enable Trump to point the finger of responsibility at the judiciary: “If only they’d listened to me,” he might declare, “then we’d be safe. Because our country is under attack. They want to kill us and chop off our heads! We need to shut down these bad, bad judges and their horrible courts before a mushroom cloud rises over New York City.”

A significant portion of the conservative right will eagerly believe Trump, because another of Trump’s alarming tactics has been to delegitimize the press, which he now routinely calls “the opposition party.” Using Twitter to gain direct access to his followers, Trump will try to mobilize a small army of angry, ignorant xenophobes to see the independent judiciary as an enemy against America — essentially, as traitorous elites who don’t have national security in their best interest. Consequently, this group of followers will welcome an erosion of the court’s power — again, in the name of domestic protection against “the Muslims.”

So the dominos are in place for a major, sudden constitutional crisis. What’s frightening about this unstable equilibrium is that another terrorist attack will almost certainly happen within the next four years, if not the next year or coming months. It’s not so much a matter of if but when this takes place, as terrorism scholars unanimously agree. And once this does happen, those who still believe in American democracy will need to be vigilant and proactive in defending the only branch of government that currently stands between democracy and autocracy.

But there is an additional layer of complexity to this situation. Not only is terrorism going to continue to threaten the West, but Trump’s rhetoric and travel ban themselves will exacerbate the threat. Indeed, Trump has already appeared in propaganda by al-Shabab, the al-Qaida affiliate in Somalia, and as Jeb Bush judiciously noted during the Republican primary, we need allies in the Middle East to help combat the problem of terrorism overseas. Implementing what appears to be a “Muslim ban” will only serve to alienate these groups.

Just recently, Ayatollah Ali Khamenei, the supreme leader of Iran, thanked Trump for showing “the true face” of the U.S., a claim that further reinforces the self-fulfilling prophecy of a “clash of civilizations.”

Another egregious consequence of this debacle is that it will fuel Islamophobia in the U.S. — that is, feed an irrational fear of Muslims, the overwhelming majority of whom are peaceful. There are multiple ingredients that contribute to radicalization, and identity crises are one. When someone feels isolated and ostracized from society, for example, because the president suggests that Muslim terrorist attacks occur so often that they don’t even get covered, that person is more likely to find extremist ideologies palatable. This is a fact of human psychology in general, not of Islam in particular.

Once adopted, such ideologies can lead otherwise moderate believers to pursue atrocities like the San Bernardino attack or the Bowling Green massacre — if, that is, the latter had actually happened. (It didn’t.)

As Steven Pinker states in an interview, Trump does indeed pose a threat to democracy. He adds:

I think that after 240 years, American democracy is too robust to be overturned by one man. To convert a democracy into an autocracy requires disabling an enormous, distributed infrastructure: legislators who have to respond to constituents and lobbyists, judges with reputations to uphold, bureaucrats who are responsible for the missions of their departments, and the tens of millions of people who have to carry out their jobs in order that the government and society function.

The point is that Americans must not let down our guard, not even for a moment. It will ultimately be up to us — the voters, our representatives and the judges who constrain Trump’s haphazard executive orders — to fight the inevitable backlash against democracy after the next terrorist attack occurs.