Trump says immigration makes us unsafe. As a beat reporter in New York, I can tell you that the opposite is true 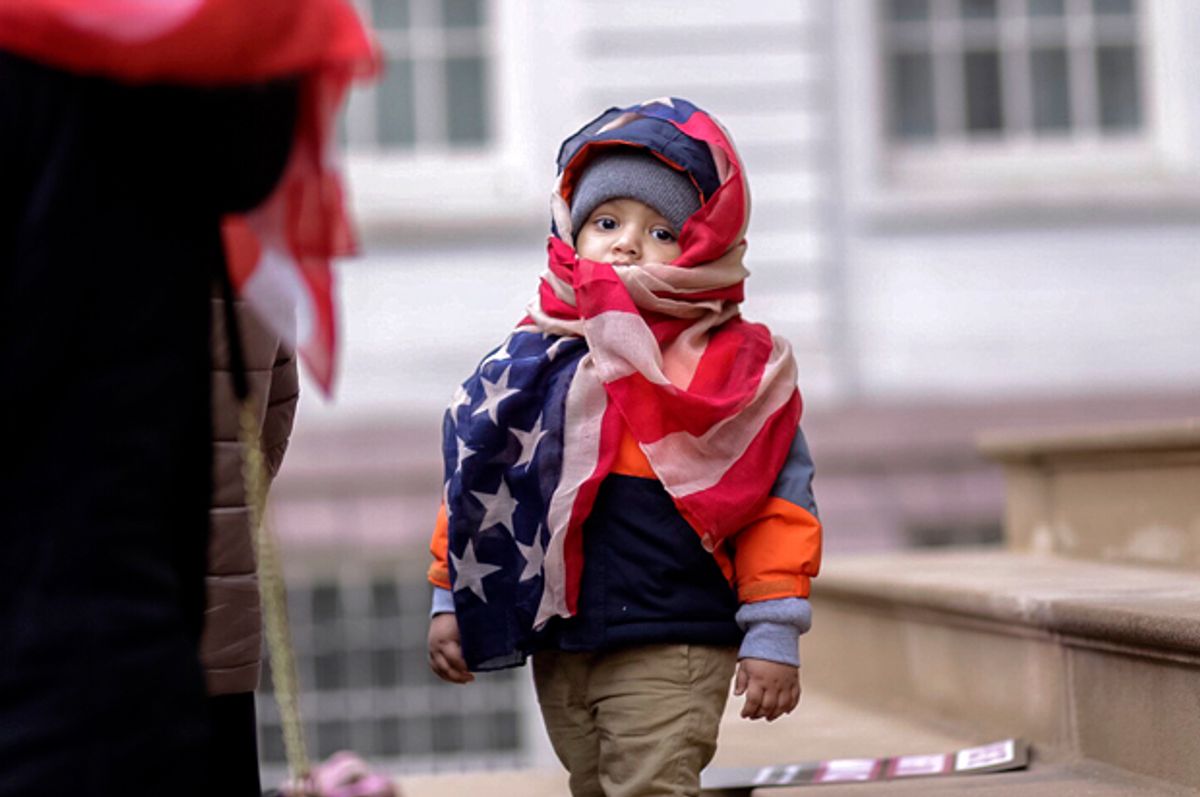 Donald Trump’s America is dark and dangerous because it has grown weak and diminished. The immigrants who were once the nation's lifeblood are now to be feared, with the world’s refugees turned away because America's greatest days are behind her. We need to ration the dream that drove that greatness.

Now Trump's campaign rhetoric is taking on the force of law, tearing apart American families with hastily drawn executive orders and immigrant roundups. Images of friends and family trying to obstruct the deportation last week of Guadalupe Garcia de Rayos, a 35-year-old woman who came here from Mexico more than 20 years ago, put a face on Trump's policies. For years de Rayos had voluntarily checked in with U.S. immigration officials, but this year was different. She leaves behind her American-born son and daughter and her undocumented husband.

In TrumpWorld we need to be in lockdown, because what we have is a fragile historic relic. One wrong move and it will all be gone with the wind, like unprotected ancient parchment. Far from being courageous, this is a frightened crouch that flinches from the future in fear.

Yet the America I see every day, working as a beat reporter in New York City, is different: a shining sanctuary city that grows more peaceful with each passing day. Its most daunting challenge remains to more justly share the vast abundance and wealth produced in this 24/7 simmering crockpot by the very global diversity Trump wants to root out.

America’s largest city, which took the brunt of the 9/11 attacks, has continued to  embrace the promise extended by the Statue of Liberty in her harbor. The results have been impressive and  should inform our national debate at least as much as the anomalous cases Trump has cited where undocumented immigrants have committed rape or murder.

The rationale for the Trump anti-immigrant narrative is a black-and-white one: "Illegal aliens" and the undocumented make us less safe and our street life more dangerous.

Yet what’s been happening in New York, a sanctuary city with at least a half a million undocumented residents, indicates their presence has come with an unprecedented decline in violent crime and a related explosion in property values. Donald Trump has experienced that first-hand in the value of his New York real estate portfolio.

It’s hard to do justice to the decline in violent crime in New York. It has come over the arc of my working life as a journalist, largely as a result of community policing that engages neighborhoods. In 1990, 2,262 murders were reported in the city. Last year there were 330. To bring that number truly alive, try and hold in your head what 2,000 pairs of shoes would look like, and then multiply that by many years of continued homicide declines. Each of those pairs of shoes is someone now living, who might otherwise have died violently

While Trump calls for national stop-and-frisk policies to reduce violent crime across the country, New York has drastically cut the practice from the era of Michael Bloomberg's mayoralty, when it approached 700,000 a year, to just 22,000 a year in a city of 8.5 million and counting. Bottom line — more nuanced policing rooted in the community, done by officers who reflect the diversity in that community, produces better results. Undocumented immigrants who believe they do not put their safety at risk when they help the police are a critical element of that success.

This record decline in New York’s violent crime, in the face of ever growing diversity with immigrants from all over the world, has created a real estate market that has transformed once crime-ridden neighborhoods into billion-dollar hot spots attracting  capital from around the planet.

In fact, New York’s biggest urban problem is that it has become such a desirable place to live that homelessness and displacement are constant public policy challenges.

When I say that New York welcomes undocumented immigrants, I don’t mean some limp handshake from the Welcome Wagon with a free car-wash coupon. It is a full, unapologetic embrace, because our city understands that their struggle to be free and improve the circumstances of their children is the engine that has always powered our progress. The city offers a municipal ID to help these folks prosper and take root, because we know they are the heartbeat of an America that gets better with the arrival of every new family escaping some truly wounded part of the world. Since our militaristic foreign policy is often driving this dislocation, it is the least we can do.

The New York City Council wanted the parents in these households to have an ID so they could attend the parent-teacher conferences for their children and find productive work. When parents or their children get sick, they can get treatment from a world-class public hospital system where no one is turned away.

As has been observed by others, President Trump’s election has brought a renewed sense of purpose to New York that’s manifesting in street protests as well as other direct action to counter Trump’s attack on what is best about America. There is a renewed intentionality to our embrace of diversity because we can no longer take it for granted. We must resist and fight to protect it.

The ink was hardly dry on Trump’s immigration ban when thousands of New Yorkers converged on the city’s airports, in solidarity with travelers whose lives had been upended by the president’s executive order. Spontaneous ad-hoc legal clinics sprung up as local universities reached halfway around the world to offer support to their scholars and students stranded by executive caprice.

In an amazing sign of civic engagement, 20,000 union construction workers converged on City Hall to demand vocational training for day workers after a spike in workplace fatalities on non-union worksites claimed the lives of 30 workers, most of them undocumented immigrants, over the last two years.

They were supported by the Uniformed Firefighters and Uniformed Fire Officers Association, who for years have had to respond to the carnage at non-union construction sites, where workers often lack basic skills and use counterfeit OSHA cards. These union members, no doubt many Trump voters among them, were not chanting for the undocumented to be deported but for them to be trained. As one man put it, “No man should die because he just wanted to feed his family.”

That same week Muslim women and their supporters celebrated World Hijab Day on the steps of City Hall. They were joined by local elected officials who spoke out against the spike  in hate crimes across the country and Trump’s executive order that targeted Muslim nations.

“We have been out on the streets almost every day in response to these executive orders that keep raining down on us and wreaking havoc," City Council Speaker Melissa Mark-Viverito told the crowd, some of whom had donned star-spangled hijabs for the occasion. "There is chaos all around us, and it is just eliciting fear and division. Many of our communities are targeted. We have seen the steady mainstreaming of bigotry over the course of the election, the rise in hate crimes against women, imams and mosques -- and now policies and executive orders baring Muslim immigration grounded in fear and hate.”

“The women in hijabs are scientists, doctors, lawyers, brilliant committed community people. The best of the world,” said Manhattan Borough President Gale Brewer, who also praised the flash crowds out at the airports in support of the Muslim community. “That kind of community coming out for the Muslim community is perhaps something we have never seen before. If there is a tiny silver lining in that it is that we are one and we are not going to forget it. We are 8.5 million people. We speak 150 languages. Immigrants bring $100 billion to the economy of the City of New York and they own 83,000 businesses.”

“I am proud to say that I am one of the 1,400 Muslim officers that serve the NYPD and put our lives on the line,” said Officer Ami Elsokary, who was assaulted, along with her 16-year-old son, in a December bias attack. “I am proud to be part of a police force that accepts and embraces diversity.” Her fellow officers, she said, “supported me through the times when other people looked down on me for wearing the hijab.”

What New York knows, and what we can’t let the nation forget, is that what we all hold in common, like the aspirations for our children, transcends our origins. We are all here now. It is what makes us one nation, indivisible. With liberty and justice for all.