Trump says the Boeing Dreamliner is an American product. On this, he's very wrong 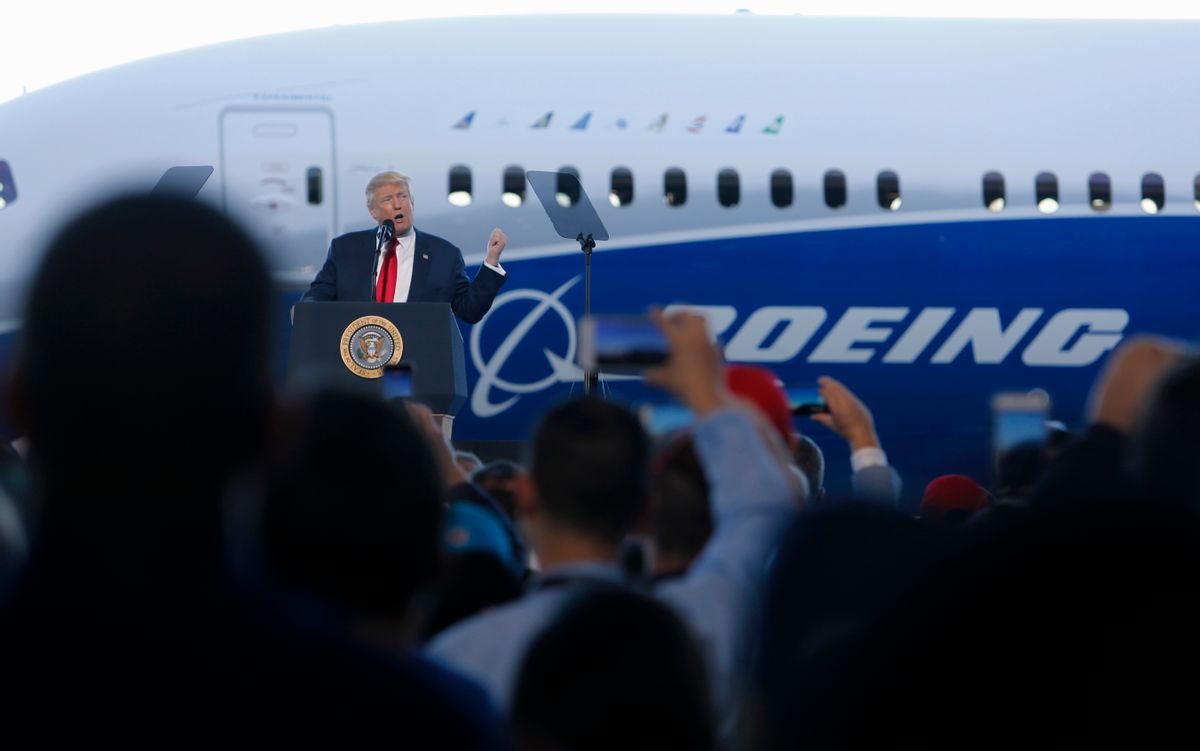 It’s pure fantasy. I’ll let you know why in a moment.

Trump also used the occasion to tout his “America First” economics, stating “our goal as a nation must be to rely less on imports and more on products made here in the U.S.A.” and “we want products made by our workers in our factories stamped by those four magnificent words, ‘Made in the U.S.A.’”

To achieve this goal Trump would impose “a very substantial penalty” on companies that fired their workers and moved to another country to make a product, and then tried to sell it back to America.

The carrot would be lower taxes and fewer regulations “that send our jobs to those other countries.”

Start with Boeing’s Dreamliner itself. It’s not “made in the U.S.A..” It’s assembled in the United States. But most of it parts come from overseas. Those foreign parts total almost a third of the cost of the entire plane.

Thales selected GS Yuasa, a Japanese firm, in 2005 to supply it with the system’s lithium-ion batteries.

The British company Rolls Royce makes many of the engines.

A Canadian firm makes the moveable trailing edge of the wings.

Notably, these companies don’t pay their workers low wages. In fact, when you add in the value of health and pension benefits – either directly from these companies to their workers, or in the form of public benefits to which the companies contribute – most of these foreign workers get a better deal than do Boeing’s workers. (The average wage for Boeing production and maintenance workers in South Carolina is $20.59 per hour, or $42,827 a year.) They also get more paid vacation days.

These nations also provide most young people with excellent educations and technical training. They continuously upgrade the skills of their workers. And they offer universally-available health care.

To pay for all this, these countries also impose higher tax rates on their corporations and wealthy individuals than does the United States. And their health, safety, environmental, and labor regulations are stricter.

Not incidentally, they have stronger unions.

So why is so much of Boeing’s Dreamliner coming from these high-wage, high-tax, high-cost places?

Because the parts made by workers in these countries are better, last longer, and are more reliable than parts made anywhere else.

The way to make the American workforce more competitive isn’t to put economic walls around America. It’s to invest more and invest better in the education and skills of Americans, in on-the-job training, in a healthcare system that reaches more of us and makes sure we stay healthy. And to give workers a say in their companies through strong unions.

In other words, we get a first-class workforce by investing in the productive capacities of Americans  – and rewarding them with high wages.

It’s the exact opposite of what Trump is proposing.

By the way, the first delivery of the Dreamliner is scheduled to take place next year – to Singapore Airlines. Current orders for it include Air France, British Airways, and Mexico’s flag carrier, Aeromexico.

Boeing is also looking to China to buy as much as $1 trillion worth of its commercial airplanes over the next two decades, including wide-body jets like the 787 Dreamliner. China already accounts for a fifth of Boeing’s sales.

But if Trump succeeds in putting an economic wall around America, these other nation’s airlines may have second thoughts about buying from Boeing. They might choose an airplane from a country more open to their own exports – say, Europe’s Airbus.

At most, it boosts Trump.