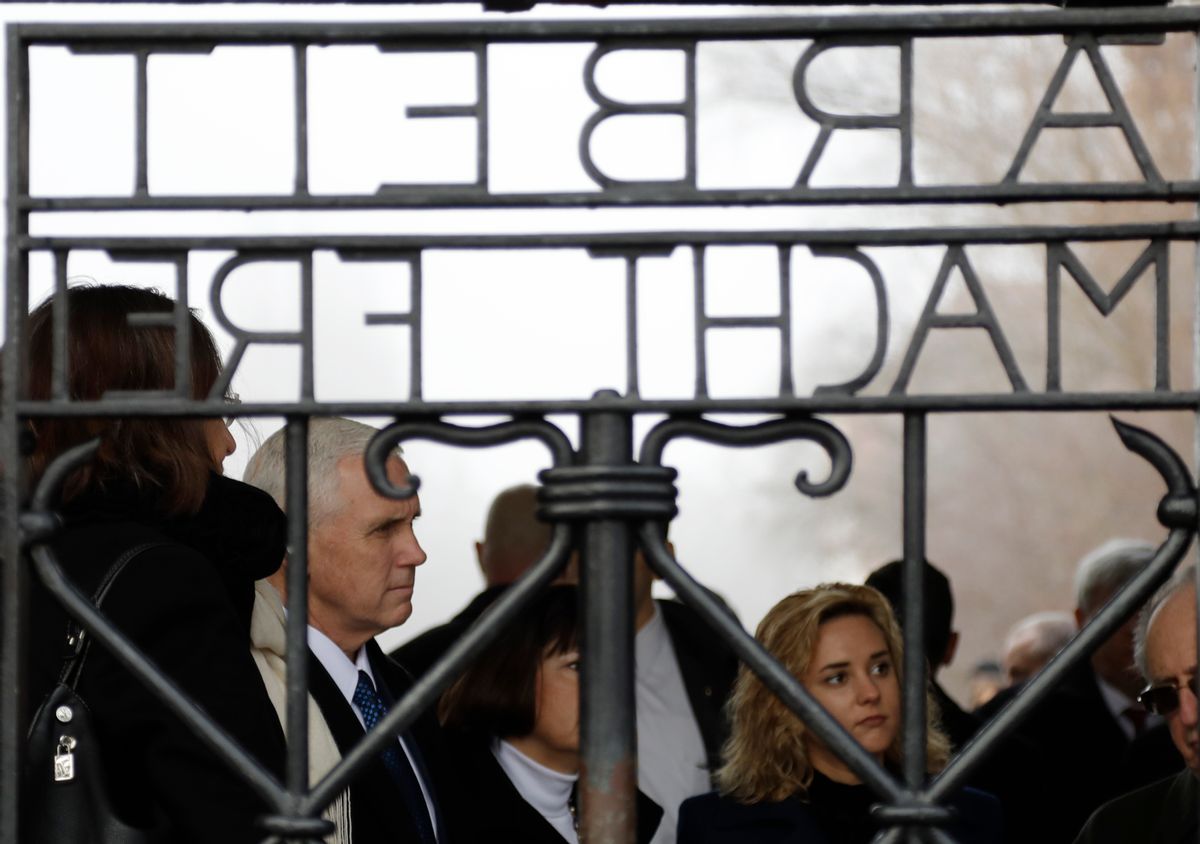 U.S. Vice President Mike Pence, his wife Karen and his daughter Charlotte, from left, stand behind the gate with the infamous writing "Work sets you free" as they visit the former Nazi concentration camp in Dachau near Munich, southern Germany, Sunday, Feb. 19, 2017, one day after he attended the Munich Security Conference. (AP Photo/Matthias Schrader) (AP)
--

DACHAU, Germany — U.S. Vice President Mike Pence paid a somber visit to the site of the Dachau concentration camp on Sunday, walking along the grounds where tens of thousands of people were killed during World War II.

Pence was joined by his wife, Karen, and the couple's 23-year-old daughter, Charlotte, as they toured the exhibits at the former concentration camp that was established by the Nazis in 1933 near Munich.

The vice president was accompanied by Abba Naor, a survivor of the camp, and other dignitaries as he passed through the wrought-iron gate bearing the inscription, "Arbeit macht frei," or "Work sets you free." The Pences placed a wreath beneath the International Memorial at the center of the camp, toured the barracks and viewed the ovens inside the crematorium.

The Pences also stopped at religious memorials at the site and later attended a church service on the camp's grounds.

The concentration camp for political prisoners and Jews near Dachau was the first such facility in Germany. In 1935 other groups, among them Jehovah's Witnesses, gays and emigrants, were sent there. After a larger facility was built, more political prisoners and more than 11,000 German and Austrian Jews were sent there in 1938. In time, more than 200,000 people from across Europe were held at Dachau and subsidiary camps, and more than 40,000 died. The camp was liberated by U.S. forces in April 1945.

Making his first overseas trip as vice president, Pence spoke to foreign diplomats and defense officials at the Munich Security Conference on Saturday and met with German Chancellor Angela Merkel and other world leaders.

Shortly after his arrival in Brussels later Sunday, Pence said the American people appreciate the nation's alliance with Belgium and he's looking forward to his meetings with European Union and NATO leaders on Monday.