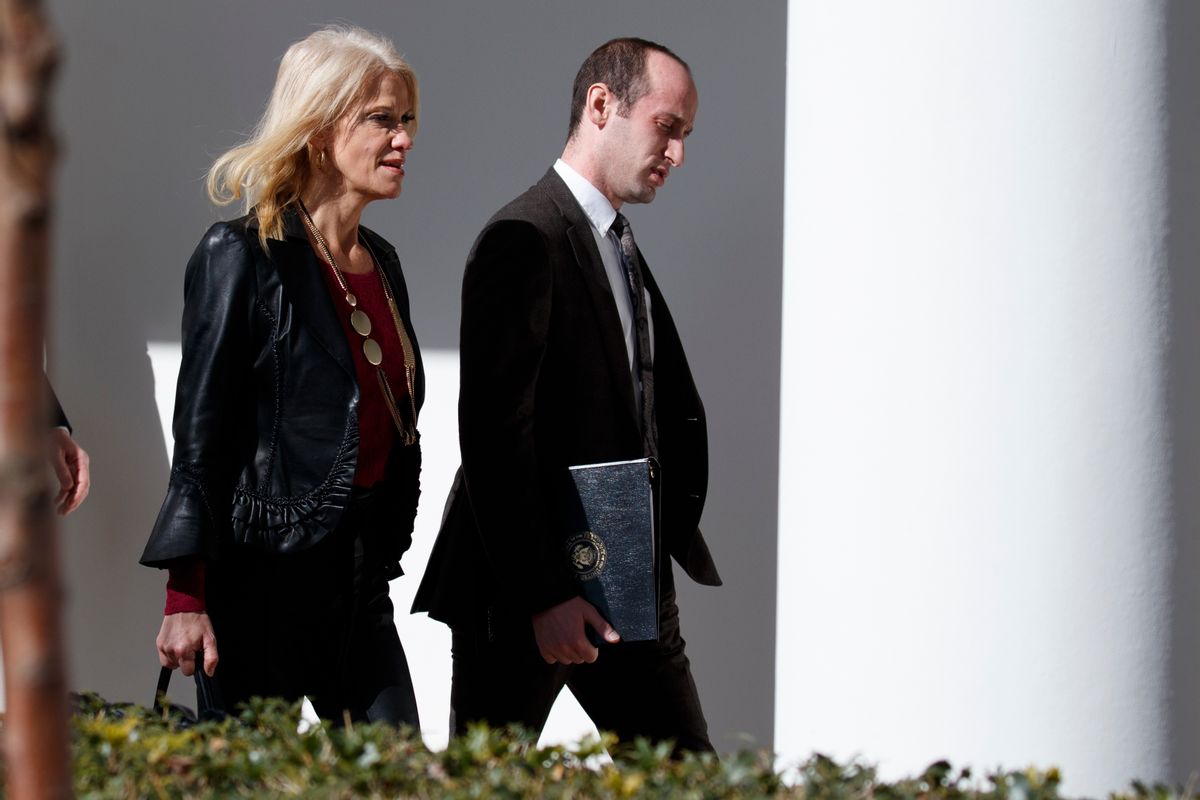 The alarming past of President Donald Trump’s senior policy adviser has come under increased scrutiny lately after the 31-year-old archconservative repeatedly lied to the American public on several Sunday morning talk shows. Since his early teens, Stephen Miller has espoused hateful views on immigrants, people of color and liberals. At Duke University, where Miller studied political science, he wrote a biweekly column preaching Islamophobia, defending white lacrosse players accused of raping a black woman, denying the existence of racism, and attacking feminism and political correctness.

The voice composing those columns from a decade ago sounds awfully similar to the present-day Trump surrogate. In both cases, Miller propagates racist ideas and outright lies, delighting in the controversy and attention his hateful stances bring him.

On Feb. 12, Miller spoke on four TV talk shows and blatantly lied to millions of viewers about voter fraud and, despite persistent questioning from the hosts, could not provide even a shred of evidence to back up his claims. In a single interview with George Stephanopoulos of ABC, he listed the most outrageous voter fraud allegations members of the Trump team have spewed at various points: Thousands of voters were bused into New Hampshire from Massachusetts to vote illegally last November; 14 percent of noncitizens are registered to vote; being registered in multiple states constitutes fraud; and the biggest whopper of all — three to five million “illegal immigrants” voted (allegedly costing Trump the popular vote).

The Washington Post fact-checked Miller’s lies and gave all of them the harshest possible rating: “Miller earns Four Pinocchios — over and over again.”

A look back at two of Miller’s college newspaper posts shows that Miller has been lying profusely and loudly for many years. Whether or not he actually believes these lies is hard to tell, but his bizarre standpoints appear to have hurt not only the country and his university community, but also his own personal health.

Two op-eds address the health effects of smoking tobacco and the "unrelenting health fascists" who regulate where one can smoke. In one piece that drastically minimizes the health risks of smoking, Miller, then a self-identified smoker, advances ideas that are patently false. Claiming “it is safer for college kids to smoke than to drive,” he overlooks a few key facts: Today, smoking kills 480,000 people in the United States each year, “more than AIDS, alcohol, car accidents, illegal drugs, murders and suicides combined.” While some college smokers may be able to quit long-term, most regular smokers who try to quit are not successful. In contrast, car crashes killed about 31,000 people in the United States in 2007, the year Miller wrote his opinion piece.

Miller relies on several articles published by the "renowned Cato Institute,” a libertarian think tank funded by corporations and wealthy conservatives. And guess what? The Cato Institute has received funding from major tobacco companies RJ Reynolds and Philip Morris. Miller cites a Cato article that even the conservative American Council on Science and Health called “unscientific and inflammatory.”

He then brings up a Cato paper that cites a study on secondhand smoke from 1975 — 32 years before Miller wrote his piece. Miller attempts to convince his readers that secondhand smoke isn’t harmful in any way. The CDC, on the other hand, says secondhand smoke leads to over 41,000 premature deaths due to heart disease and lung cancer every year. You decide who’s right.

In an example of unmitigated irony, Miller writes, “the anti-smoking crusade is nearly impervious to truth or reason.”

“The real risks,” said Miller, are not the nearly half a million people killed by smoking every year; rather, Miller said they “are the fascistic tendencies that prohibit smoking in even private establishments.”

In a second piece, Miller proposed that Duke create a smoking lounge, which "would be a great place to watch sports, recreate and relax, and would allow me and my fellow smokers to enjoy our tobacco in rain, wet, cold and snow, and thus spare us from unnecessary risks to our health."

Miller isn't the only tobacco truther on the Trump team. In 2000, Vice President Mike Pence wrote, "smoking doesn't kill." As Think Progress points out, Pence’s former family business operated hundreds of gas and cigarette stores, and he’s in the pocket of Big Tobacco, having raked in campaign contributions from the industry during his Indiana campaigns. Regarding his federal races, the National Association of Convenience Stores, which represents tobacco interests, is Pence’s fifth-largest donor ($62,000), and RJ Reynolds is his 20th-biggest donor ($39,000), according to data compiled by the Center for Responsive Politics. Pence has consistently supported legislation favoring Big Tobacco.

Miller’s tactic of bleating bald-faced lies fits right in with Donald Trump and his deceitful team that includes Steve Bannon (a studied propagandist), Kellyanne Conway (who’s been blacklisted from at least two shows because of her outright lies) and Sean Spicer (who made hilariously false claims about Trump’s inauguration crowd). They've all done all they can to mislead the public and discredit the media.

But as even the mainstream media grows angrier, and Trump increasingly favors far-right outlets in his press briefings, it seems likely that the Animal Farm Administration’s propaganda scheme will come back to bite its malicious purveyors.