Using a network of levees and irrigation gates, a farmer used gravity to drive water back into an ailing aquifer 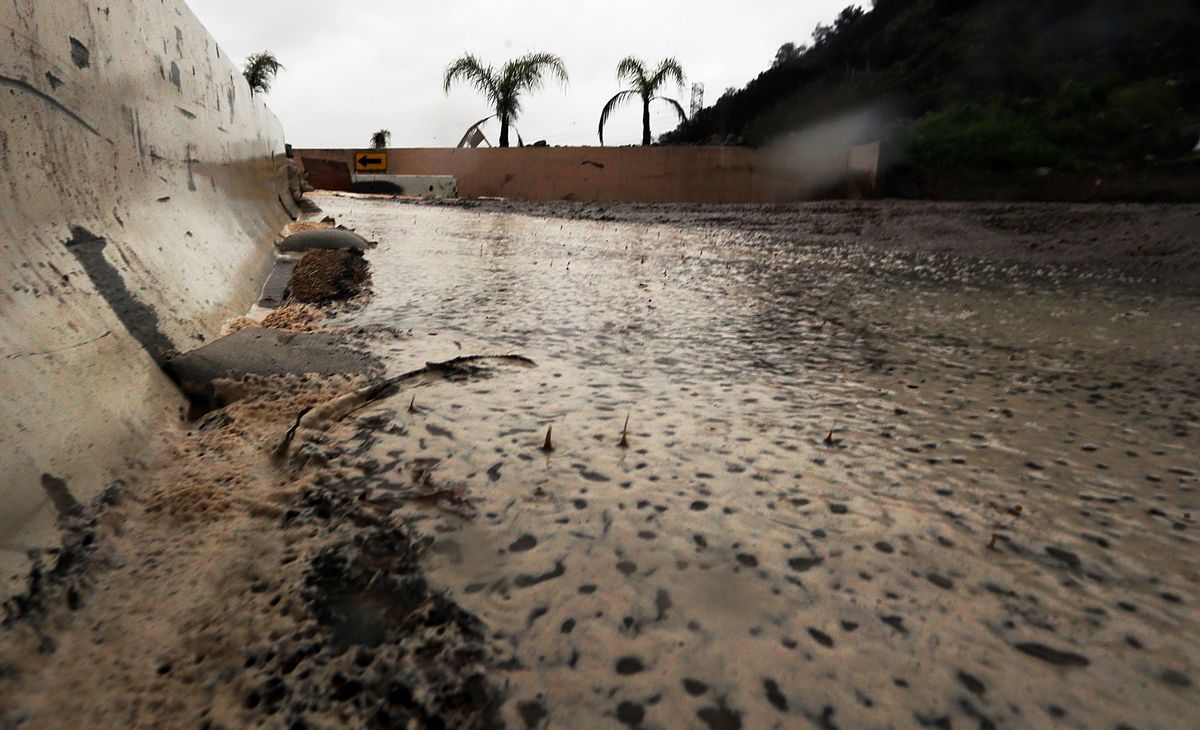 Raindrops splash in water, mud and debris in a basin slowly filling up in Duarte, Calif., in a threatened area below a burn area know as the Fish Fire, as a powerful storm moves into Southern California Friday, Feb. 17, 2017. The saturated state faces a new round of wet weather that could trigger flooding and debris flows. (AP Photo/Reed Saxon) (AP Photo/Reed Saxon)
--

As dam managers were draining water from a Northern Californian reservoir this week to avert what could have been one of the worst flood disasters in the state’s history, Southern California farmer Don Cameron was doing something different with the watery winter excess.

Using a network of levees and irrigation gates, Cameron inundated the orchards, vineyards and vegetable and alfalfa fields of Terranova Ranch, a farm in Fresno County that he manages, using the power of gravity to drive water back into an ailing underground aquifer.

Similar approaches are being considered and tested statewide as California confronts the impacts of aging infrastructure, rising temperatures and decades of unsustainable use of water from wells. Groundwater recharging can reduce flood risks, boost water storage and alleviate the sinking of lands that often follows heavy groundwater pumping.

“Our primary source of water is groundwater,” Cameron said. “We have a reservoir under our farm that needs to be replenished, and it’s a lot more easy to do that than try to build above-ground structures.”

Nearly 200,000 Californians were evacuated this week after heavy winter rains following years of drought nearly overtopped the Oroville Dam, which is the tallest in the state. Two emergency spillways used to flush excess water from the reservoir were damaged.

“The Oroville crisis certainly does seem like a call to work with nature, rather than against her, by expanding groundwater storage as opposed to big new dams,” said Kate Poole, a leader of the nonprofit Natural Resources Defense Council’s water program. “There are many fewer environmental problems associated with groundwater storage.”

Rising temperatures are projected to cause California’s powerful winter storms to dump more rain and less snow, and to hasten the melting of snowpacks, requiring more water to be captured in winter and spring for use in the warmer months.

Stanford University’s Water in the West program estimated the $2.7 billion could be used to boost underground water storage in California by nearly 3 trillion gallons. That was six times the amount of storage that could be gained if the money was used instead to build and expand above-ground reservoirs.

Sometimes pumps are used to drive waters from the surface down into aquifers, but oftentimes gravity alone does the trick, with water percolating quickly below the surface after it’s deliberately pooled over quick-draining soils and rocks.

Although California’s farming regions are already strewn with levees, pumps and other infrastructure used to corral and move water, there are limits to how existing infrastructure could be used to boost groundwater storage.

“Irrigation infrastructure was designed to move smaller amounts of water,” said Helen Dahlke, a hydrologist at University of California, Davis. “Most infrastructure doesn’t have the capacity to move large water amounts, such as we have during storm or flood flows.”

Terranova Ranch plans to expand its groundwater-storage efforts, with construction of new infrastructure planned by next summer. Analysis of its groundwater storage efforts five years ago, which was the last time California endured widespread flooding, showed the water was stored at a tiny fraction of the cost of new dam building.

Similar planning is underway elsewhere. Kern County-based Semitropic Water Storage District, which provides water to cities and farms, plans to publish an environmental review this summer detailing its plans for capturing flood waters by corralling and funneling them through the earth into a natural aquifer.