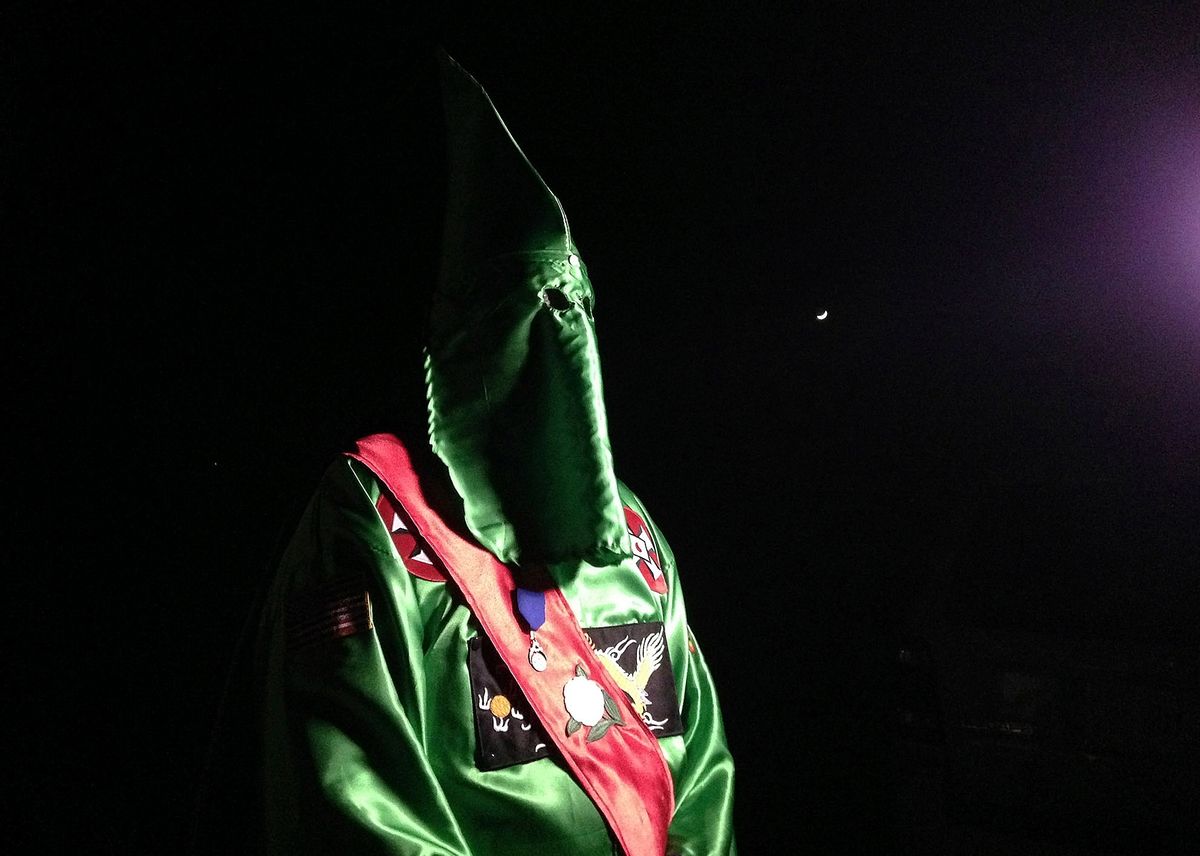 In this photo taken Friday, Dec. 2, 2016, a robed and masked Ku Klux Klansmen stands on a muddy dirt road during an interview near Pelham, N.C. The KKK and other white extremist groups don't like being called "white supremacists," a phrase that dates to the earliest days of white racist movements in the United States. () (AP Photo/Jay Reeves)
--

ATHENS, Ga. — The Celtic cross tattoo on Shannon Martinez's leg gives away her past.

A victim of sexual assault at age 14 and never quite able to meet her parents' expectations, Martinez sought out other angry teens. By 16, she was a skinhead spouting white supremacist rhetoric, giving stiff-armed Nazi salutes and tagging public property with swastikas. She favored racist fashion statements — like the symbol on her right calf.

Fortified by the love of an adopted family, Martinez left the skinheads behind. Today she's helping others do the same as part of an emerging U.S. movement that helps people quit hate organizations.

Modeled loosely upon organizations that formed in Europe years ago to combat extremism, groups and individuals are offering counseling, education and understanding to extremists seeking a way out.

Now a 42-year-old mom who homeschools her kids at their house in Georgia, Martinez volunteers with Life After Hate, a leading organization dedicated to helping people leave white supremacy. On Facebook, she shares her story with others who've left or are looking to leave extremism.

"We act as a group of people who understand each other," said former skinhead Christian Picciolini, an old friend of Martinez who founded the Chicago-based Life After Hate. "We understand the motivations of where we came from and why we joined. We understand what keeps people in. And we help each other detach and disengage from that ideology and provide a support system for them as they go through that transformation."

Founded in 2009, Life After Hate was awarded a $400,000 Justice Department grant in the closing days of the Obama administration — funding that could be endangered if the Trump administration decides to refocus a federal program combatting violent extremism solely on Islamic radicals, as is being considered.

The group operates a website where people who want to explore leaving white extremism can submit contact information. It also conducts educational and counseling programs including the Facebook group where members sometimes chat with extremists trying to change their lives, Picciolini said.

"I started the organization ... because it was so difficult to leave that movement," he said. "Even though I'd abandoned the ideology, I wasn't ready to give up my community and my power and my identity, and I knew how hard it would be for other people to leave this type of ideology or this type of movement."

Another group, One People's Project, was started by Daryle Lamont Jenkins of Philadelphia. Aside from monitoring racist groups, Jenkins — who is black — confronts white nationalists at public gatherings and talks one-on-one with willing white supremacists as he can, trying to show them there is a way other than hate. Some have never met a black person, he said.

Jenkins' work is similar to that of Daryl Davis, a black musician from Maryland who has gained notice for trying to talk people out of the Ku Klux Klan.

Mark Potok, a senior fellow with the liberal Southern Poverty Law Center in Montgomery, Alabama, said it's hard to determine exact numbers, but around 100,000 people might be members in hate groups and several hundred thousand could be linked informally.

Potok said exit organizations began in Europe in the 1980s to counter the rise right-wing militants there.

"I do think that this is a particularly important moment for this kind of exit work to be happening because we have seen in the last year, year and a half, a real legitimization of these views," he said.

President Donald Trump's election with the support of neo-Nazis and the Ku Klux Klan has lent a new sense of urgency to opponents of white supremacy.

"The Trump election has absolutely lit a fire under the butts of the white nationalists," Martinez said. "It is like, 'Our time is coming.'"

Martinez said she grew up in metro Atlanta in a relatively normal family but rebelled after being sexually assaulted at a party. She got involved in the punk scene, which led to the skinhead movement.

Martinez said she was on a path to prison or an early death when she moved in with the family of her skinhead boyfriend, who was away for Army training. His mother showed unconditional love that pulled her out of the abyss, Martinez said.

Today, she looks at photos of herself from her skinhead days and fights back tears.

"I was filled with rage and anger and the skinheads were the angriest people that I knew and I was kind of like, 'Those are my people.' And the ideology was a means of taking something that was ethereal, something that was unnamable, an anger and a rage that I felt, and giving it a focal point," she said.

Shane Johnson was born into extremism. His father and many of his father's relatives were part of the Klan, he said, so there was only one real way for him to go as a youth in northern Indiana.

Johnson eventually joined a skinhead group in addition to the KKK but finally decided to quit after getting arrested, stopping drinking and meeting the woman who is now his wife. Leaving was a real fight, though, as even relatives jumped him at a gas station one night after learning he wanted to quit.

"When I dropped out they beat the holy hell out of me," he said.

Since then, Johnson has tried to cover some of his racist tattoos with new ones and wears long sleeves to hide remnants of the past he regrets. Life After Hate is helping him numerous ways, Johnson said, including showing him how to read the Bible without seeing it as a treatise on racial separation, as he had been taught.

Johnson, now 25 and living in rural Indiana, isn't ready to begin counseling others about leaving extremism; he still sometimes longs for his racist buddies and their ways. But he said his own story is proof that hate doesn't have to be permanent.

From The Wires White Supremacy