In the face of the Trump presidency, Katy Perry asserts her political self, but to what end?

Perry sells herself as woke, even as her discography is littered with distasteful undertones of of homophobia 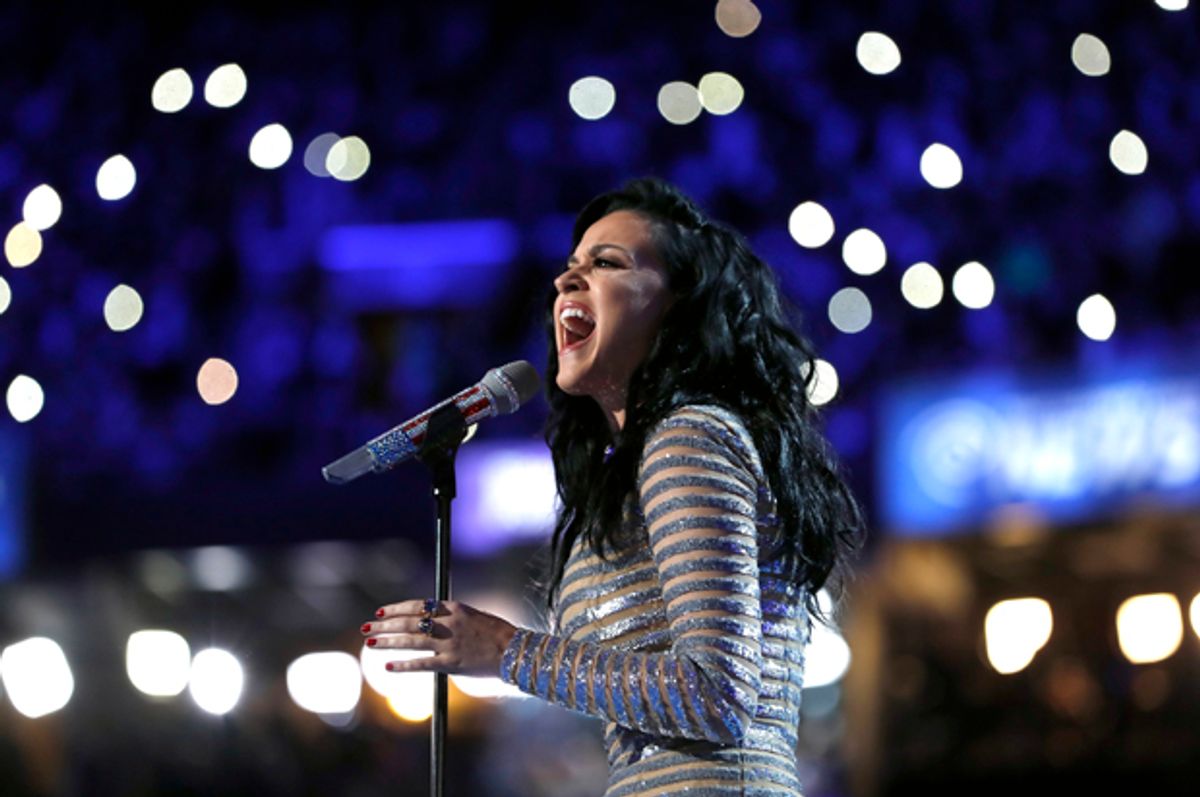 Katy Perry won’t let the Trumpocalypse keep you off the dance floor.

The 32-year-old pop singer debuted “Chained to the Rhythm” at the Grammy awards. Announcing that the chanteuse would devote her brand to “purposeful pop,” she wore an armband emblazoned with the word “PERSIST,” a nod to Elizabeth Warren’s protest on the Senate floor against Jeff Sessions’ confirmation. As she read a letter from Coretta Scott King admonishing the civil rights record of the Alabama Senator, Republican Mitch McConnell shouted her down, saying: “She persisted.” That phrase has since become a rallying cry against the new administration.

The catchy tune, which is the first single from Perry’s yet-to-be-released fourth album, is intended to mark a shift in her public persona. Produced by the ever-ubiquitous Sia, “Chained to the Rhythm” marries Perry’s glittery facade — as well as her torrid love affair with mixed metaphors — to an undercurrent of Trump-era malaise. “Living our lives through a lens,” she croons. “Trapped in our white-picket fence/ Like ornaments/” The bridge, courtesy of Bob Marley’s son, Skip, stops just short of calling for a coup. “Up in your high place, liars/” the 20-year-old sing-raps. “Time is ticking for the empire/”

Rebooting her persona appears to be working for the former California Gurl: “Chained to the Rhythm” is breaking records on Spotify, with more streams in its first 24 hours than any other song in the platform’s history.

Selling herself as “woke” is good marketing for a singer about to enter the second decade of her career, a transition that’s been extremely unkind to pop contemporaries from Jessica Simpson to Lily Allen. But the issue is that Perry has been selling herself as enlightened for some time, even as her discography is littered with a distasteful undercurrent of homophobia and racism. If the diva hopes to rescue America from Trump with booty-shaking jams, Perry needs to save herself first.

The pop mainstay first stormed onto the scene with “I Kissed A Girl” in 2008, the rare song to upset both Christian conservatives and the LGBT community. Republicans didn’t like the Dr. Luke-produced thumper because it appeared to promote homosexuality, but queer critics took issue with the seemingly affirming tune’s underlying premise: It’s OK to make out with other girls as long as you aren’t a lesbian about it.

Perry claims that she penned the No. 1 hit — which actually has four writers attached — after catching a glimpse of Scarlett Johansson, then Woody Allen’s muse, in a magazine. But the track dabbles in the sort of girl-on-girl action you might find at a frat party, Sapphic action strictly for the purpose of male attention. The singer, who reminds us in the song that she has a “boyfriend,” repeatedly reminds her audience that it’s all in good fun: “You're my experimental game/ Just human nature.”

One particular couplet, though, really drove a stake all the way through the heart of LGBT listeners. “It's not what, good girls do,” Perry sings. “Not how they should behave.”

These are odd sentiments for someone who has repeatedly referred to herself as a supporter of the queer community. The debut of “I Kissed a Girl,” which spent seven weeks atop the pop charts, coincided with the passage of Proposition 8 in California, a voter referendum that overturned an earlier Supreme Court decision legalizing marriage equality at the ballot box. After same-sex union were voted down in her home state, Perry told DoSomething.org: “I am a gay activist and I say that proudly. I voted no on Prop 8.”

Perry has billed herself as an ally to LGBT people throughout her career, dedicating the music video to “Firework” to the It Gets Better campaign. Over vaguely inspirational lyrics imploring asking listeners have “ever [felt] like a plastic bag/ drifting through the wind/ wanting to start again,” the video shows two boys kissing in a crowded dance party. But as The New York Times noted, there was something a little more than opportunistic behind its veneer of queer affirmation. The song, which Perry also claimed was a tribute to Jack Kerouac, was written in 2009, well before Tyler Clementi’s suicide made the issue of anti-gay bullying a nationwide topic of conversation.

Clementi was a Rutgers student who took his own life in 2010 after being outed by his roommate. The lyrics for “Firework” are so vague and nonspecific they could be applied to anything. Like the video for Christina Aguilera’s thematically identical “Beautiful,” the video also makes room for a young cancer patient and a teen struggling with body negativity.

It’s also nakedly hypocritical about someone who once implored an effeminate ex to kill himself in a song to advocate for tolerance and understanding. Although “I Kissed a Girl” proved her big break in the U.S., it wasn’t her first release here. That would be “Ur So Gay,” offered up as a promotional single from “One of the Boys.” The triphop-inspired track failed to chart on the Hot 100 but managed to go Gold on the strength of digital downloads.

On “Ur So Gay,” Perry bemoans the fact that she fell in love with a straight man who acts gay. Among the metrosexual fellow’s chief sins are that the fellow wears makeup, likes Hemingway and listens to Mozart — basically that he behaves like a woman, is culturally refined and has good taste in books. The singer would like you to know that these traits are bad and men who enjoy such things are not desirable. Her solution? “I hope you hang yourself with your H&M scarf/” she sings, later adding: “You're so gay and you don't even like boys/”

Perry recorded the song in 2008, which you could reasonably argue was a long time ago. Perhaps she released it, learned from the extremely negative feedback from the LGBT community, regretted the controversy and moved on.

Unfortunately not. Shortly after “Ur So Gay” was released, Zack Rosen of The New Gay confronted her about claims that the song is homophobic and Perry shrugged off the criticism. She told Rosen the backlash was “unfortunate,” a response that should be read as analogous to “I’m sorry if you’re offended.” In an episode of “MTV Unplugged” recorded the same year, Ms. Perry would double down on defending “Ur So Gay.” She called the anti-LGBT anthem “one of [her] favorite songs.”

Rather than dropping the tune, “Ur So Gay” would remain in her rotation. Even while using bullied youth to sell copies of “Firework,” Perry dedicated the song to a male concertgoer in 2010 — a former crush who didn’t return her affections.

Perry has willfully continued making these sorts of mistakes her entire career, refusing to grow and evolve as an artist. Critics pointed out that the lyrics of “Last Friday Night (T.G.I.F.),” an 80’s throwback complete with a sax solo courtesy of Kenny G, heavily allude to date rape and it didn’t help that the video shows someone getting roofied — as if getting drugged and sexually assaulted where just a wild and wacky thing that happens when you’re busy having fun. At the 1:40 mark, you can clearly see a male partygoer putting something in his female conversation partner’s drink.

The singer has also been lambasted for featuring minstrel depictions of black women, with oversized posteriors and giant pink lips, in her performances. During the video for “This Is How We Do,” she pulls an Iggy Azalea — donning cornrows, slicked down baby hair and an exaggerated pucker. If the intent weren’t obvious enough, Perry eats a watermelon.

Maybe Perry — who has continually defended her right to be as racist and homophobic as she wants — has finally come of age and matured as an artist and a human being. Stranger things have happened.

But then again, probably not. Even while debuting her new socially conscious Barbie image, Perry managed to take not one but two unnecessary swipes at Britney Spears on the Grammys red carpet. Spears, who had a very public breakdown in 2007, famously cut off all her hair at the height of media fascination about her mental health. She has since sought treatment and appears to be doing well, releasing a well-received comeback album, “Glory,” last year. The former party girl spends most of her time Instagramming about Caesar salads.

When Ryan Seacrest asked Perry why she took such a long break in between releasing records, the singer didn’t tout her newfound wisdom. She called it “taking care of your mental health.” Perry added, “I haven’t shaved my head yet.”

As the saying goes, if it ain’t woke, don’t fix it.