In a race split between big names, gay small-town mayor and Afghan war vet Pete Buttigieg is now a contender 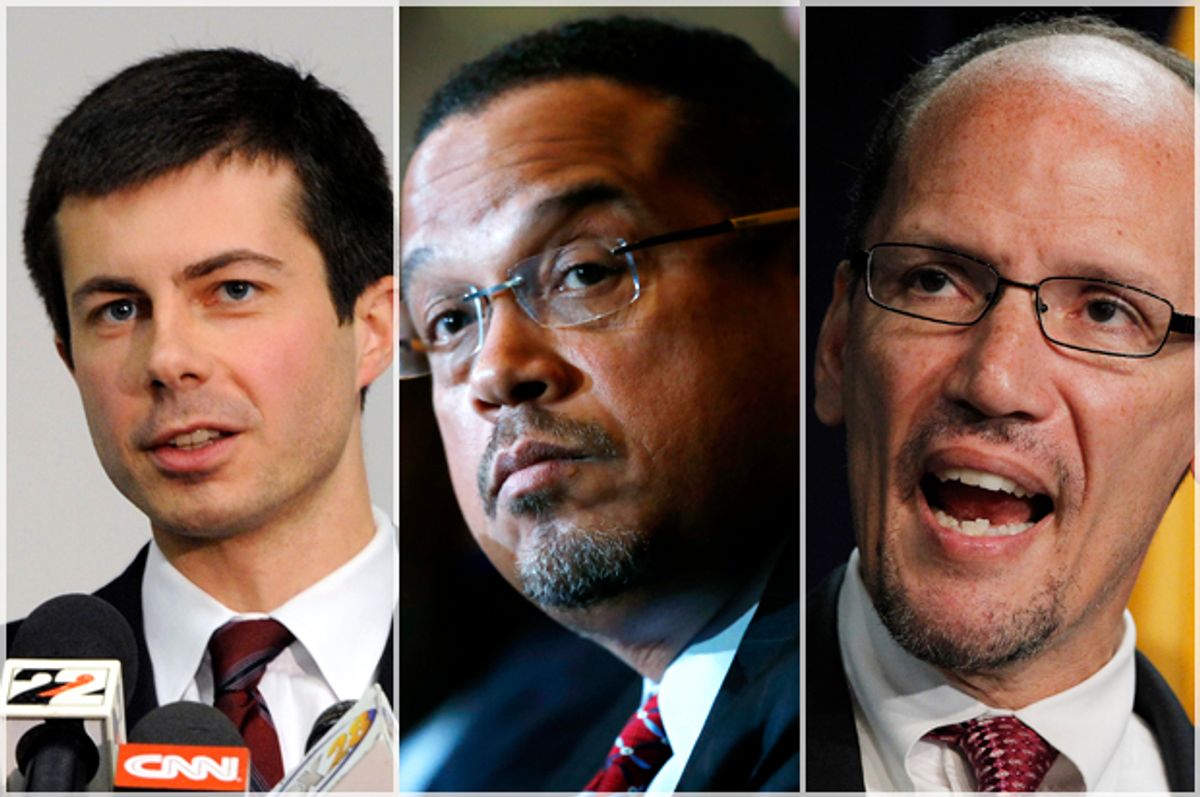 While the national media has been focused on the two most famous names competing to head up the Democratic National Committee, Pete Buttigieg, the mayor of South Bend, Indiana, has quietly built up a sizable base of support of his own away from the spotlight.

Those efforts may pay off. It’s starting to look as though the two leading candidates, former Labor Secretary Tom Perez and Rep. Keith Ellison of Minnesota, may have enough commitments from DNC members to split the vote for each other but not enough to actually win. Many of their supporters have come to dislike the other top candidate in the running. That's particularly true with regard to some of Ellison's backers, several of whom have been saying that electing Perez to chair the Democrats would render the party "irrelevant." Ellison supporters have also allegedly confronted some Perez supporters in a harassing manner, according to several news reports.

That just might open up a spot for the 35-year-old Buttigieg to have some real leverage in the race, especially since in recent weeks he has managed to garner a surprising number of high-profile endorsements, including from former presidential candidate Martin O’Malley and past DNC chairs Ed Rendell, Steve Grossman, David Wilhelm and Joe Andrew. On Wednesday morning, Howard Dean, the former Vermont governor, presidential candidate and DNC chair, joined them in giving his support to Buttigieg. (In case you're wondering, it's pronounced Boo-ti-JUDGE).

In a conference call with reporters, Dean — whose insistence on a "50-state strategy" has been referenced repeatedly by all the DNC chair candidates — said he had preferred Buttigieg for some time but declined to endorse anyone out of his admiration for each of the candidates.

"I like all the people in this race, but I finally came to the conclusion that I owed it to the party and to the country to say something," Dean said when asked why he had delayed endorsing any chair candidates.

Dean also expanded upon comments he had made in December that Democrats need to make room for younger leaders within the party. Buttigieg is nearly a full generation younger than Ellison and Perez, who are 53 and 55 years old, respectively.

A local politician from a red state might not seem appealing to progressives at first glance. (In fairness, South Bend is considerably geographically closer to Chicago than Indianapolis.) Many on the party's left, including independent Vermont Sen. Bernie Sanders, believe Democrats got into their present situation, where they control of none of the federal branches of government yet steer all three branches in just five states (California, Delaware, Hawaii, Oregon and Rhode Island) because party elites cravenly pursued moderate policies and alienated their liberal base.

As someone trying to represent both wings of the party, however, Buttigieg sees no contradiction between reaching out to people who no longer feel welcomed by Democrats and reconnecting with voters who feel a strong loyalty to the party.

“Right now 50-state strategy is gospel,” he said in a telephone interview with Salon. “We forget when it was first introduced, it was quite controversial.”

Under Dean’s chairmanship of the party, Democrats stopped “running away from our values,” Buttigieg said. Instead of moving to the center, left-leaning politicians should instead be honest about their beliefs and focus on actually delivering results to benefit everyone, he said.

“There's a real risk of getting so absorbed in the 2016 story that we wind up reliving it,” he said. “I believe our party would be in a lot of trouble even if we won the White House in 2016. We're not in trouble simply because we lost the White House.”

According to Buttigieg, an officer in the U.S. Navy Reserve who served seven months in Afghanistan (and who is also openly gay), over the past several years Democrats simply stopped trying to compete in large portions of America.

“We’re living in a country where approximately 1 out of 10 congressional races actually is competitive. That’s a sign that democracy isn’t working the way that people might expect,” he said. Gerrymandering, the practice of manipulating district borders to favor one party over the other, has played a role in that, the mayor said. But Democrats need to realize that political strategy has also played a role in the party's downfall. Democrats now hold about 1,000 fewer state legislature seats than they did in 2008.

Buttigieg was too diplomatic to point out that a large part of the reason Democrat control has collapsed in many non-coastal states is because former President Barack Obama’s political team repurposed his 2012 campaign machinery into Organizing for Action instead of building up the DNC as a financial and technical resource for state and municipal party operations.

At a debate on Feb. 11, Jaime Harrison, another DNC chair candidates, did speak out against the operation: “I love and adore everything about President Obama — except for OFA,” he said, referring to Organizing for Action.

Among other regional Democratic leaders, Organizing for Action has been the subject of much criticism. The Daily Beast reported last week on a fiery discussion on a private email listserv for party activists.

If we were having a conversation about state parties, I would say OFA hurt state parties badly. It certainly had an undercutting effort. And there is a lot of work state parties do that isn’t very sexy . . . and that becomes incredibly difficult when budgets are cut in half because people are trying to curry favor with the president and his allies.

Instead of criticizing Organizing for Action and the former president for harming regional Democrats directly, Buttigieg said he thinks party leaders need to remain aware that politics should be about principles rather than about individual people. That was a lesson he said Democrats need to learn with respect to Obama, but also in their efforts to obtain the email addresses of the nearly 3 million people who donated to the insurgent Democratic presidential campaign of Bernie Sanders.

“Whatever the mechanisms are, we need to make sure people have a good reason to give to the party and become involved,” Buttigieg said.

“You can’t get caught talking about Trump all the time,” he said. “We’ve got to be talking to people about our own values and how their lives will be changing for better or worse because of the policies in Washington. . . . If all we’re talking about is Trump, then he’s already won.”

Simply responding to whatever Republicans do has been standard practice for Democrats since the 1990s, Buttigieg said. It’s time they moved toward doing something more affirmative.

This Saturday as the 447 voting members of the Democratic National Committee cast their ballots for party chair, that message could prove quite powerful for the South Bend mayor.