Trump's strategic vision of chaos: Inventing a nonexistent crisis so he can "solve" it 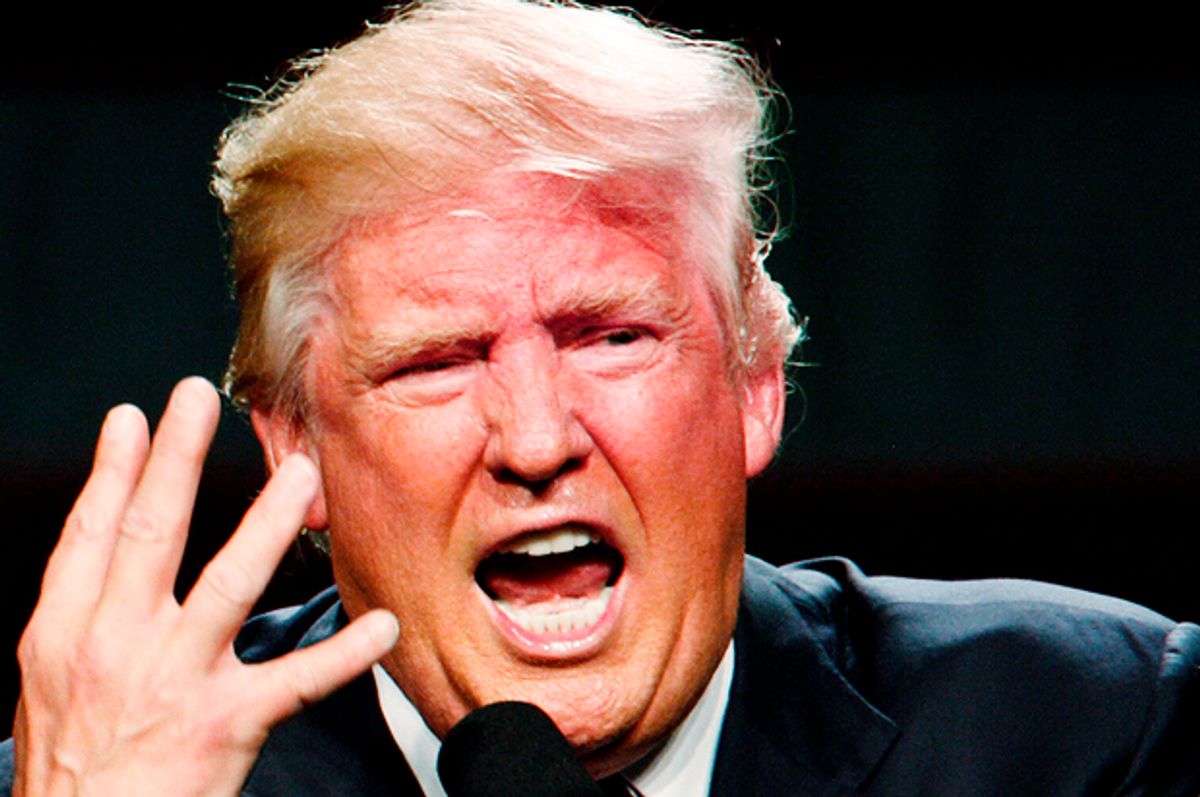 As you know, our administration inherited many problems across government and across the economy. To be honest, I inherited a mess. It's a mess. At home and abroad, a mess. Jobs are pouring out of the country; you see what's going on with all of the companies leaving our country, going to Mexico and other places, low pay, low wages, mass instability overseas, no matter where you look. The Middle East is a disaster. North Korea — we'll take care of it, folks; we're going to take care of it all. I just want to let you know, I inherited a mess.
— Donald Trump, Feb. 17

These words of the president are not quite as evocative as his doomsday inaugural "American carnage" address, but it may be more effective in the long run. Donald Trump is ignorant in most ways a president should be smart, but he does have an unerring instinct for hype.

One of his favorite tall tales is the miraculous "comeback" story. You've heard him endlessly recount the tedious details of his Great Campaign in which nobody said he could get the nomination and yet he defied the odds and vanquished 16 men, Carly Fiorina and one crooked Hillary, ultimately winning a historic landslide of epic proportions. No, it wasn't historic and it wasn't epic and it wasn't a landslide, but that's part of the myth Trump has created for himself: He only wins big.

The point is that he's making himself out to be a hero who can defy tremendous odds to fight back and win. That's why he insists that he inherited a terrible mess that will take a heroic effort to turn around, and he's the only guy who can do it.

The country he describes is very familiar: Its economy is terrible, millions of people are going bankrupt and losing their jobs, their homes and their health care. People who have saved money for decades have seen their retirement funds shrink to nothing in the stock market crash, while Wall Street masters of the universe collect millions and tell everyone financial institutions are simply "too big to fail." Major industries are on the verge of collapse. Banks are closing all over the country.

Tens of thousands of troops are still stationed overseas in a war that seems to never end. Terrorist bombings are happening all over the world and nobody knows when the next one is going to hit close to home. Even the natural disasters are catastrophic, taking out whole American cities and seeming to portend more of the same as the climate changes and nobody knows what to do about it. The future seems bleak indeed.

We all know that country. It was America in 2009.  It was the mess our last president inherited, not this one. (If you need a little refresher course on how bad the employment situation was during the Great Recession, you can read all about it in a recap from the Bureau of Labor Statistics.) It was the worst economic recession in the lifetime of anyone younger than age 70 and it came on the heels of a period of tremendous fear and anxiety after 9/11 and the debacle of the Iraq war.

Now that was a real mess.

To be sure, the recovery has been a long, uneven slog and many people are still reeling. There are long-term economic trends that have hit some communities very hard for decades and the Great Recession exacerbated their suffering. And much of the gains have gone to the upper 1 percent.

But millions more people have jobs, homes and health care today than they did eight years ago. That is just a fact. The idea that Donald Trump is facing an emergency of that magnitude, even among many of the white working-class folks who remain underemployed and financially insecure is ridiculous. We were on the verge of another global Great Depression. Now we're not.

As I pointed out before the election in September, whoever won was going to have the economic wind at his or her back, which is a lucky thing for any president. I quoted economist Jared Bernstein who wrote in The Washington Post that "poverty fell sharply, middle-class incomes rose steeply, and more people had health coverage" in 2015, which meant that many of those who had been left behind by the recovery were starting to see the benefits. But there is often an emotional hangover after a deep economic crisis that takes some time to dissipate; even when things have improved,  people still feel anxious for some time afterwards.

One suspects Trump understood from the beginning that the economy was rebounding. But in order to take advantage of his reputation as a wealthy businessman, he needed to pump up those feelings of anxiety so that he could take credit for the upturn once in office. The dystopian hellscape that he describes today will quickly give way to "Morning in America" for his followers. And he doesn't have to do anything.

This is lucky for him since Trump doesn't have a clue about what a president has to do in a real crisis and doesn't have the temperament or skills to do it anyway. As Jonathan Cohn wrote in this piece for The Huffington Post on Tuesday, as much as Trump and his minions insist that his first month in office has been historically successful, it's been nothing more than endless gaffes, scandals and flashy edicts that are far less substantial than the sweeping and complicated legislation that President Barack Obama ushered through Congress in the corresponding period.

During the presidential campaign, Trump mocked Hillary Clinton for her wonkishness: “She’s got people that sit in cubicles writing policy all day,” he said during one interview. “It’s just a waste of paper.” At one point, Trump’s own policy advisers quit because nobody was paying them or taking them seriously.

That's appalling. But unless Trump's GOP colleagues in the Congress muck up things badly by repealing the Affordable Care Act or making such drastic cuts that employment falters, he doesn't really have to do much. He can just tweet about saving some manufacturing jobs that CEOs are happy to pretend he personally negotiated, and his followers will be happy to give him credit for "saving" an economy that was already on the upswing.

There is one problem with his cunning plan, however. If a healthy economic environment requires the confidence of people that their future looks bright, then this growth may just come to a screeching halt. The "carnage" he likes to describe may not exist today. But millions of people are frightened to death that the nightmare of Donald Trump may make it very real in the days to come.