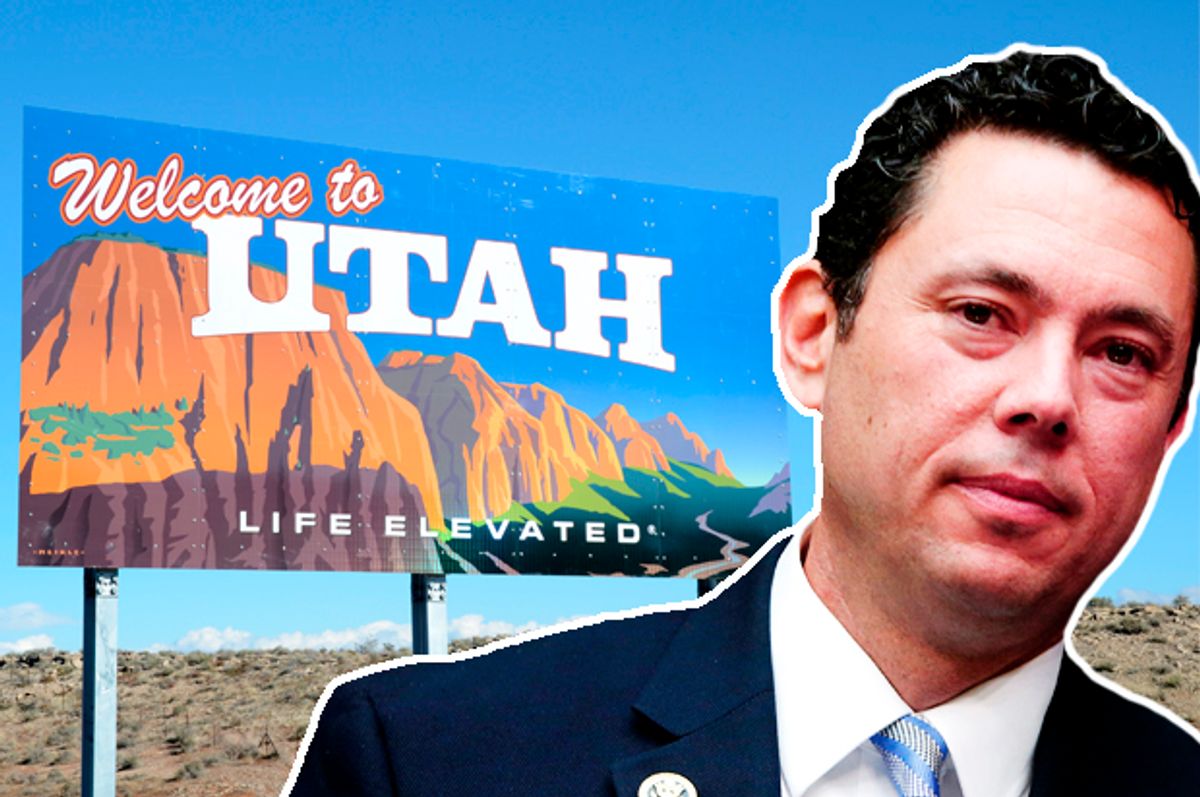 Outdoor recreation is a big business in the state of Utah, which is blessed with some of the most scenic natural areas, including ski resorts, canyons, forests and deserts. According to the state government's website, "In Utah alone, outdoor recreation contributes more than $12B to the economy, employs more than 122,000 people and is the primary driver behind the tourism industry."

This is such a big deal for Utah that in 2013 Republican Gov. Gary Herbert created an official state office for outdoor recreation, which gives grants to outdoor recreation infrastructure projects and youth programs around the state.

Despite all this, the outdoor recreation industry is in full revolt against the state. In a shocking move, Outdoor Retailer, a twice-yearly trade show that pumps an estimated $45 million a year into the state's economy, has announced plans to move from Salt Lake City, which has hosted the convention for the past 20 years. Organizers of the convention, which has attracted as many as 40,000 people in the past, are currently garnering bids from other cities.

Outdoor Retailer's organizers don't want to leave Utah. The Beehive State is a natural home for a trade featuring the latest in sports gear and equipment. But organizers feel like they have no choice because Utah's political leaders keep escalating their war against the very public lands that the outdoor industry needs in order to sell hiking boots, skis and kayaks.

“Utah is kind of ground zero for a lot of these bad ideas," explained Tania Lown-Hecht, communications director for the Outdoor Alliance, over the phone. Her organization is a nonprofit that organizes sports enthusiasts for the goal of protecting public lands.

"Utah’s state government and their congressional delegation have had some pretty extreme positions on public lands," she added. "And public lands are the foundation of the outdoor recreation industry.”

Republican leaders in Utah, including Herbert and Rep. Jason Chaffetz, have adopted an attitude toward public lands that seems radical even by the nutty standards of the 21st-century GOP. The federal government owns huge tracts of land in the West, and Utah Republicans want those acres turned over to the states, which would then be free to sell them off to private mining, drilling and development interests.

The list of attacks on public lands at the hands of Utah Republicans is exhausting to consider. In 2012, the state legislature passed a bill demanding that the federal government hand over ownership of 31 million acres of land to the state, which would almost certainly have sold most of it, including to private interests. Utah has even considered suing the federal government in an effort to gain control of those lands. Chaffetz continues to introduce bills to undermine federal control over public lands, even though he keeps receiving blowback from his constituents for doing so.

Utah Republicans are even attacking national parks and monuments. Led by Rep. Rob Bishop, Republicans in Congress are pushing to drastically reduce the president's power to designate national parks and monuments. Republicans in the state are also pressuring President Donald Trump to reverse Barack Obama's designation of the Bears Ears National Monument, even though this move has resulted in the protection of lands historically significant to a large number of Native American tribes.

Make no mistake: This land grab is all about the money. As Stephanie Mencimer at Mother Jones has explained, these efforts have been funded and directed by groups like the American Legislative Exchange Council, which receives funding from oil industry barons like the Koch brothers.

The problem Utah Republicans now face is that skiers, hikers, cyclists and other outdoor sports enthusiasts want to keep those public lands accessible — and they're beginning to organize. Utah is at the center of a tense struggle between the outdoor recreation industry and the drilling and mining industries. And the outdoor recreation industry is increasingly willing to throw its weight around in order to protect public lands. For the owners of businesses, it's not just about doing what's right; it's also about protecting their profits.

Tensions escalated when sports supplier giants like Patagonia and Kuhl pulled out of the Outdoor Retailer expo, citing disagreements with Utah Republicans over the public lands issue.

The CEO of Patagonia, Rose Marcario, explained that decision by releasing a public statement, noting, "Utah Gov. Gary Herbert signed a resolution urging the Trump administration to rescind the Bears Ears National Monument, making it clear that he and other Utah elected officials do not support public lands conservation nor do they value the economic benefits that the outdoor recreation industry brings to their state."

The Outdoor Industry Association, which is closely tied to the Outdoor Retailer show, hosted a call last week with Gov. Herbert and industry leaders of companies like Patagonia, The North Face and REI. The outdoor industry alliance demanded that Herbert and other Utah Republicans end the attacks on federal lands and national monuments. Herbert's office was apparently not interested, and it now seems certain that the Outdoor Retailer show will pick up and move to another state after its contract ends in 2018.

"​The decision by the Outdoor Industry Association to prevent Salt Lake City from bidding for the Outdoor Retailer Summer and Winter Market is offensive," said Paul Edwards, the Utah governor's deputy chief of staff, in a public comment after the meeting. "It reflects a gross ingratitude to a community that has embraced the Outdoor Retailer show, subsidizing its success and expansion through direct investment — let alone extraordinary hospitality."

Edwards claimed that it's a "false narrative" to suggest that Utah leadership is "somehow hostile to those public lands." Unfortunately, the long legislative record left by Utah's most influential Republican elected officials tells a different story.

One of the saddest aspects of this story is the damage done to Salt Lake City, a progressive-leaning city with a Democratic mayor. The city itself is unequivocally supportive of the outdoor recreation industry and the environmental concerns that are fueling this industry boycott of the state. Now it's poised to take a major economic hit because the Outdoor Retailer show is pulling out of the state.

"There will be hospitality jobs lost, and hotel rooms from Sandy to Ogden vacant for those two weeks a year," the editorial staff of The Salt Lake Tribune explained in a Saturday piece denouncing the Republican leadership for creating this situation. "We're now building a 900-room downtown convention hotel — with public bonding authority — largely on spec. There is now no convention currently on Salt Lake City's docket that demands it."

The Tribune editors lamented. "We could be Hawaii, and instead our leaders want us to be Oklahoma."

Lown-Hecht of the Outdoor Alliance said that on a personal level, she will regret not making the annual trip to Utah. “Our whole team, we love going to Salt Lake. It’s beautiful," she said.

But these are desperate times for the outdoor recreation industry. It's not just that their profits are under threat if Utah Republicans succeed in selling off huge tracts of public land. Many of these business leaders chose to work in their industry because they love nature and participating in outdoor sports. Watching public lands being sold off to drilling and mining interests offends them personally, politically and in every other way. They have tried appealing to Republicans on moral and aesthetic grounds, and that didn't work. So now they're speaking in a language that Republicans definitely understand: the language of cold, hard cash.