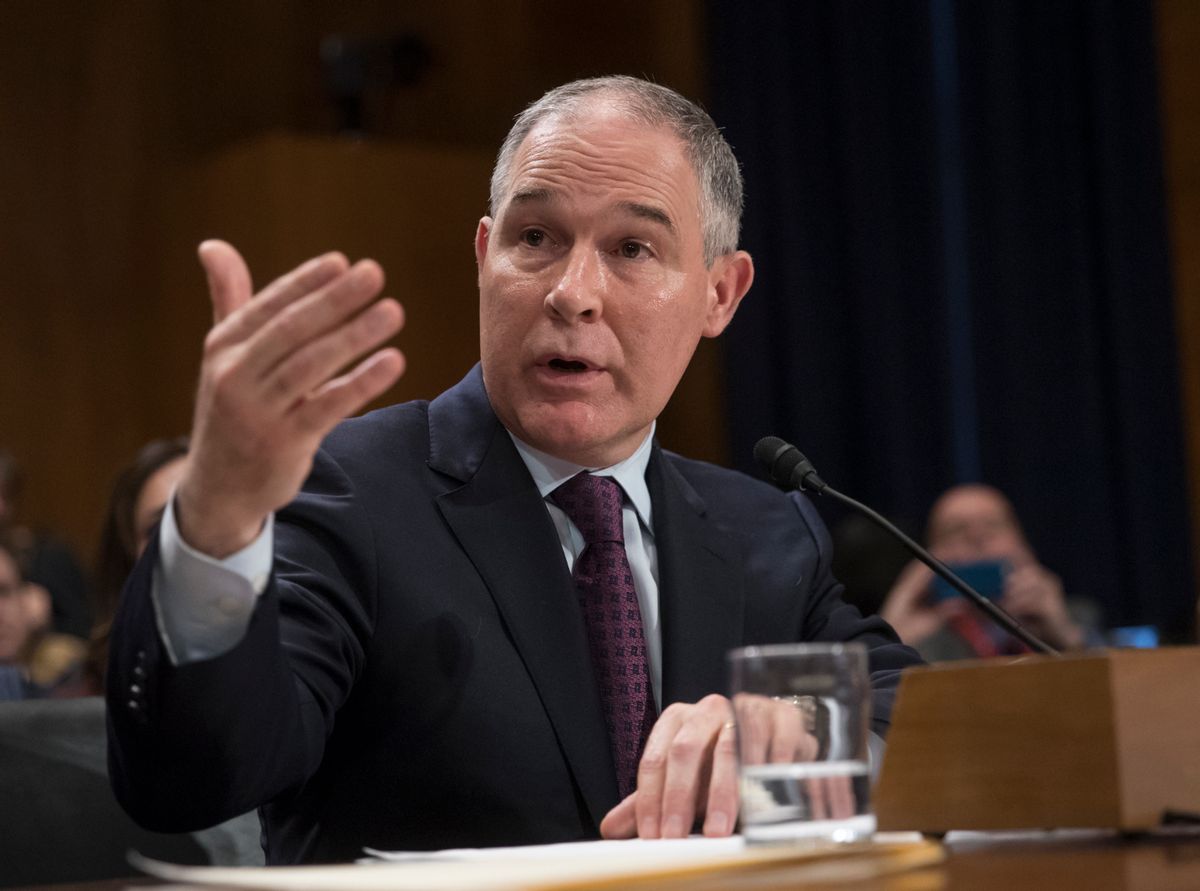 On the eve of his confirmation, former Oklahoma attorney general Scott Pruitt was ordered by an Oklahoma judge to turn over thousands of communications between his office and the fossil fuel industry. But before those records were made public, Senate Republicans rushed to narrowly confirm Pruitt to lead the EPA. Now that the more than 7,500 pages have been released, it is clear why Pruitt had been withholding his extensive correspondences with oil executives from the public for the last two years.

Emails made public as the result of a lawsuit and open records request by the Center for Media and Democracy show Pruitt and his staff coordinated their legal strategy with oil and gas industry executives and conservative advocacy groups funded by those profiting from fossil fuels, including the billionaire brothers David and Charles Koch. Pruitt used his office as Oklahoma attorney general to work on a regular basis with oil and gas company Devon Energy, American Fuel and Petrochemical Manufacturers, as well right-wing organizations like Americans for Prosperity, and the American Legislative Exchange Council’s (ALEC).

The AG’s office did not release emails it believes are exempted from public release. District Judge Aletia Haynes Timmons is reviewing those claims, and has ordered the agency to produce other emails requested by the watchdog group.

After several northeastern states threatened to file a lawsuit against the EPA for failing to regulate methane in 2013, Pruitt joined with 12 other attorneys general to urge the agency to avoid regulating methane emissions. Newly released emails reveal that Devon Energy, an oil and natural gas exploration and production company that was impacted by the EPA's directives on methane emissions, had a heavy hand in helping Pruitt's effort.

In a 2013 email from the deputy solicitor general, advice was sought from representatives at Devon Energy regarding the proposed regulations of methane emissions.

Devon Energy executive Bill Whitsitt marked up the letter for the Attorney General’s office. “Please note that you could use just the red changes,” he wrote in an email, “or both red and blue (the latter being some further improvements from one of our experts) or none.”

Devon’s director of public policy and government affairs, Brent Rockwood, said in another e-mail to Pruitt staffers that Devon’s legal team had taken "another review" of Pruitt’s letter and had suggested including footnotes to source the quotes and legal arguments. "Thanks for putting the AG letter into action, and I think that this letter will make a strong statement and a real difference,” Devon’s Rockwood said in the e-mail to Pruitt’s office.

Devon was one of the top contributors to the Republican Attorneys General Association, which Pruitt led for two years during the period of email correspondence with the energy company.

When Pruitt was a state representative he was a task force chair of the American Legislative Exchange Council (ALEC), an organization that connects lawmakers with corporate lobbyists to produce model bills that are then introduced in legislatures across the country.

Newly released emails between Pruitt's executive assistant and Amy Anderson, ALEC director and Oklahoma membership contact, indicate he appeared at an ALEC conference on May 3, 2013, in Oklahoma City. At the meeting, Pruitt addressed a workshop entitled "Embracing American Energy Opportunities: From Wellheads to Pipelines." The emails described Pruitt’s speech as focusing on “state primacy in oil and gas regulation and the EPA’s sue & settle modus operandi.” Oil industry giant Exxon Mobil is a major donor to ALEC.

Another email shows a conversation between Pruitt and a lawyer with American Fuel and Petrochemical Manufacturers (AFPM)– one of the largest oil & gas lobbying firms in Washington. AFPM told Pruitt that despite their desire to challenge EPA regulations like the renewable fuel standard program and ozone regulations, Pruitt should instead challenge the rules on their behalf, arguing the complaint would be seen as “more credible coming from a state.”

"We think it would be most effective for Oklahoma to file a separate waiver petition that emphasizes 'severe environmental harm,' as this argument is more credible coming from a state with primary responsibility for achieving and maintaining attainment with the NAAQS," Moskowitz wrote.

Moskowitz's email was then forwarded to Pruitt's deputy solicitor general who replied that he knew little about the federal Renewable Fuel Standard and asked for further instructions from the industry group about what they should do.

"I think it is safe to say that AG Pruitt has an interest in the issue," Pruitt's deputy wrote. "Hopefully I haven't missed the boat too much on these questions but I want to make sure I fully understand what Oklahoma's role will be."

AG Pruitt proceeded to file challenges to both regulations in an official state letter to Lisa Jackson, who was the administrator of the EPA under President Obama.

One email shows a Pruitt aide asking an Americans for Prosperity staff member “how the AG’s office and AFP can work together” and AFP celebrating Pruitt as a “true champion of freedom and liberty!” for his attacks on the EPA’s climate protection rules.

In another email dated August 2013, Matt Ball, an executive at Americans for Prosperity, sent Pruitt an email thanking him and his “respective bosses and all they are doing to push back against President Obama’s EPA and its axis with liberal environmental groups to increase energy costs for Oklahomans and American families across the states.” executive at Americans for Prosperity, a nonprofit group also funded in part by the Kochs. "You both work for true champions of freedom and liberty!" the note said.

Pruitt’s attacks on behalf of industry and right-wing groups were not limited to the EPA, but even included Obamacare, according to an email from the far-right organization, Oklahoma Council of Public Affairs.

After Pruitt appeared on Fox News in November 2013, OCPA’s Jonathan Small emailed Aaron Cooper, who was Pruitt’s director of public affairs, to tell him he was going to turn the segment into a blog and “freedom flash it out.”

On Tuesday, Scott Pruitt gave his first speech to the EPA's employees as their new administrator. His first official address was mostly a defense of his ties to the industry he is tasked with regulating, saying, “I believe that we as a nation can be both pro-energy and -jobs, and pro-environment. We don’t have to choose between the two."