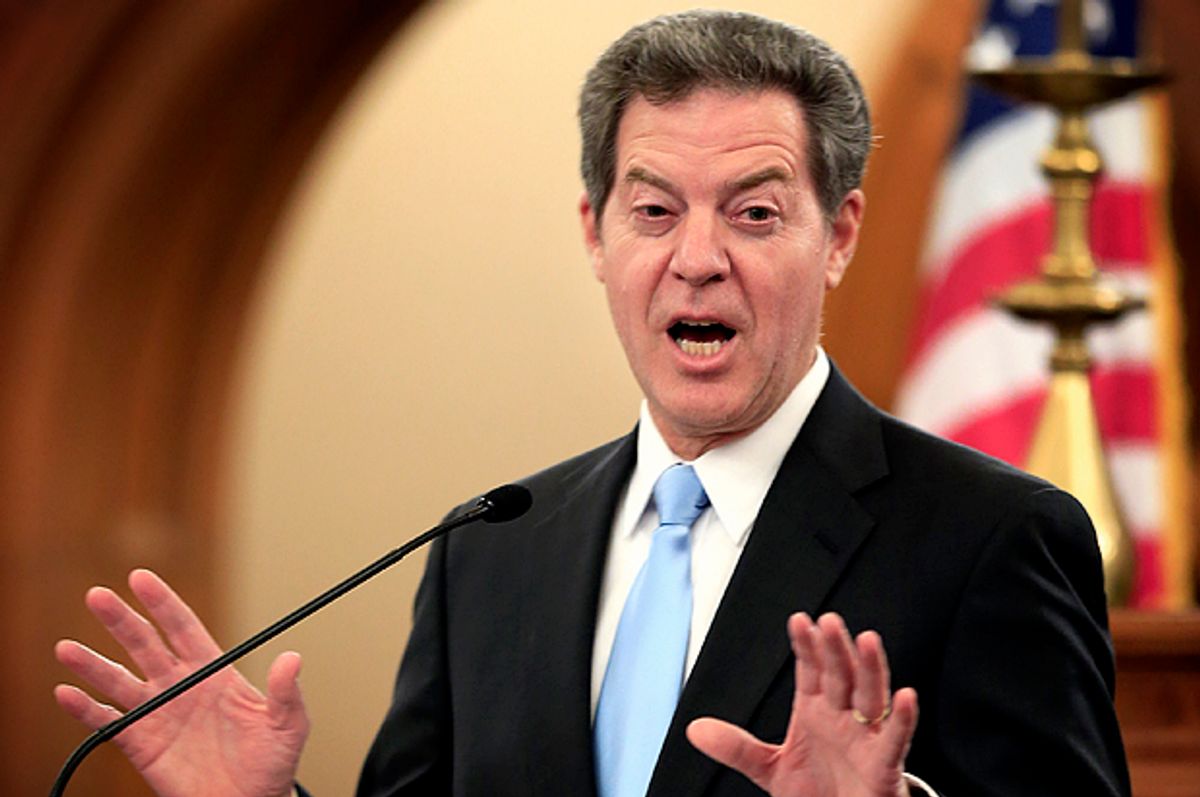 The wave of moderate Republicans who swept last year's GOP primaries in Kansas should have been Republican Gov. Sam Brownback's first clue that a revolt was brewing in his own party. Fourteen conservative state legislators allied with the governor were ousted in favor of more moderate Republicans who were critical of America’s least popular governor and his failed trickle-down economics experiment in the Sunflower State.

On Wednesday the trend came to fruition and Brownback was delivered a stunning rebuke by Republicans in the Kansas House. Facing a budget shortfall that stands at more than $1 billion through June 2019, Republicans in Kansas recently passed a bill intended to help fill the state’s budget shortfall by rolling back several of Brownback's tax cuts. Yet Brownback's massive cuts were saved by Republican leaders in the state's Senate.

After Brownback took office in 2011, he and the Republican-dominated legislature joined forces to cut the state's already low tax rates even further. When Brownback eliminated the state income tax for partnerships, limited liability corporations and other similarly structured entities in 2012 and 2013, he promised it would act “like a shot of adrenaline into the heart of the Kansas economy.” But in 2015, for the fourth straight year, the gross state product’s growth rate was below that of the region and of the nation.

Brownback’s tax cuts have left the state’s finances in such shambles, even Kansas’ Republican-led chambers have found themselves ready to change direction. House Bill 2178 would have raised personal income tax rates, added a third tax bracket and eliminated a widely derided exemption that allows more than 330,000 owners of corporations to pay zero state taxes on their income.

Brownback vetoed the bill and the Kansas House voted 85-40 to override it two hours later, according to the Kansas City Star. While it wasn't exactly the same set of Republicans who initially allowed Brownback near-complete freedom to create a low-tax conservative utopia, Wednesday's rebuke is still remarkable.

“When you get 85 votes — over half of them Republican votes — against you, that’s really significant,” Burdett A. Loomis, a political scientist at the University of Kansas, said in an interview.

Late on Wednesday, however, Brownback counterattacked against his own party:

“This punitive, retroactive tax increase on Kansas workers and families would have cut Kansans’ pay almost immediately,” Brownback said in a statement after the lower house overrode his veto. “We will continue to work with legislative leadership to develop a balanced budget. I encourage them to find savings in the state’s budget before asking Kansans to find savings in theirs.”

Ultimately, the override measure fell just short in the state Senate. Again, from the Star:

The Senate voted 24-16 to override the veto later in the day, falling three votes short of the two-thirds majority needed for an override after both Senate President Susan Wagle, a Wichita Republican, and Senate Majority Leader Jim Denning, an Overland Park Republican, spoke out against it.

Brownback has remained steadfast in his support for the tax cuts -- supported by the anti-government radicals Charles and David Koch and their Wichita-based Koch Industries, the single largest contributors to Brownback’s campaigns. In a December interview with the Wall Street Journal, Brownback urged President Donald Trump to mimic the massive spending and tax cuts he implemented in Kansas — which have led to growing budget gaps, missed growth projections and two credit downgrades for the state.

“My focus is to create a red-state model that allows the Republican ticket to say, ‘See, we’ve got a different way, and it works,” Brownback explained.

At Friday's Conservative Political Action Conference in Washington, Brownback doubled down. "When have we added more government anywhere that's taken more taxes and you end up with a product that's more efficient [and] that costs you less?" he asked the attendees at the annual conservative gathering.

It isn't the conservatives gathered at CPAC that Brownback needs to convince, now that his own party has begun to turn against him.

“While 24 senators formed a bipartisan coalition to override Brownback’s veto, the Senate Republican president and majority leader failed to lead and bring about the change they promised to Kansas voters in the 2016 elections,” Senate Democratic leader Anthony Hensley said in a statement.

Republican Sens. Barbara Bollier and Dinah Sykes of Lenexa, two moderates elected in 2016, said they believed the override measure would have passed if the Senate Republican president and majority leader had supported it.