Why do right-wingers favor Keith Ellison in the DNC race? Various reasons, and they're not pretty 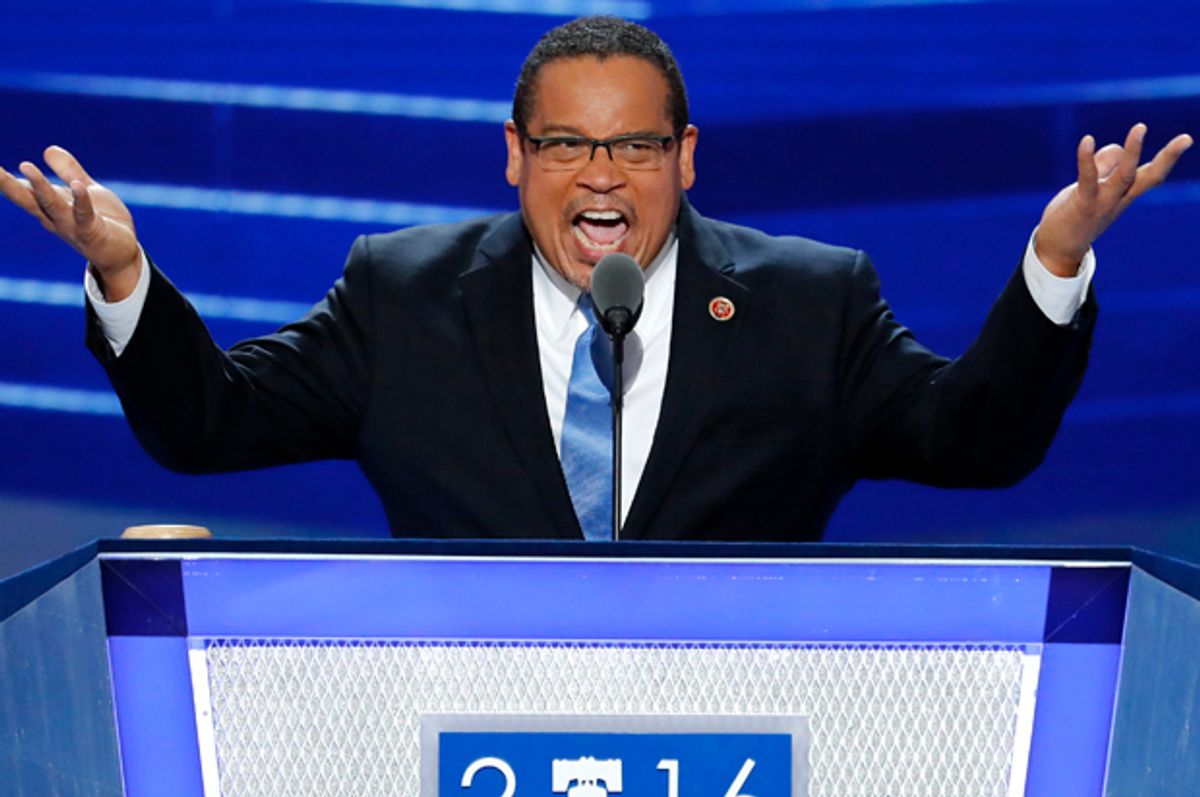 As the contest over who will head the Democratic National Committee comes to a close, party leaders appear divided. Head counts by Democratic activists and news organizations indicate that none of the candidates for the office will likely win on the first ballot on Saturday. On the other side of the political aisle, however, there appears to be unity about who the Republicans would like to see leading the DNC: Minnesota Rep. Keith Ellison.

For the most part, the right-wing support for Ellison (if you can even call it that) isn't derived from agreeing with his progressive positions on issues. It reflects a perception that electing Ellison would present Democrats with political optics that would make winning over disaffected white voters in the heartland more difficult.

According to Chuck Ross, a reporter at the conservative news website The Daily Caller: “Republicans appear to be leaning in favor of an Ellison win because he is seen as a more polarizing choice to lead the DNC, which is still reeling from the forced resignation of Florida Rep. Debbie Wasserman Schultz.”

Mr. Ellison’s selection would mean the Democratic Party would be led by a left-winger’s left-winger, handing an early assist to the GOP and the Trump administration for the 2018 midterms.

The Minnesota congressman has many fans at Free Republic, a web forum where Tea Party Republicans mix it up with Trumpian nationalists.

“Man, how lucky would we be to get Ellison!?” wrote member nhwingnut last Saturday.

Many others agreed, several of whom stressed their perception that Democrats had become perceived as an anti-white political party.

The Democrats are so afraid now of nominating or placing whites in position of power within their party for fear of upsetting Blacks and Hispanics. Live by the race card and die by it. The Democrats are gonna learn that lesson now and also they better be prepared for the intraparty war between those two groups especially when Blacks begin to see themselves being shut out of power positions as the party accomodates [sic] Hispanics because of their large voting bloc. I love popcorn but I don’t know how much I’ll be able to scarf down especially when, and I do mean when Ellison becomes the head of the DNC.

Even President Donald Trump has gotten into the act, praising Ellison on Wednesday for having seen his potential as a Republican presidential candidate in June 2015 when few others did.

"One thing I will say about Rep. Keith Ellison, in his fight to lead the Democrats, is that he was the one who predicted early that I would win!" Trump wrote on Wednesday as MSNBC aired a segment showcasing former DNC chair Howard Dean endorsing Pete Buttigieg, another chair candidate.

Ellison also has "fans" on the far right, including Andrew Anglin, the creator of the popular neo-Nazi website the Daily Stormer. In a December post, Anglin wrote he was “officially endorsing” the Minnesota congressman as “the only man capable of dealing with the chronic kike infestation which plagues the Democrat party,” presumably a reference to Ellison’s past advocacy on behalf of the Nation of Islam and its anti-Semitic leader Louis Farrakhan.

Anglin also echoed the reasoning cited above from more mainstream right-wing figures: “Beyond that, it simply isn’t appropriate or even okay — as in, ‘this is not okay’ — that the Democrat party — the party of the Negro — should be run by whites and/or Jews.”

Ellison was also praised by former Ku Klux Klan member David Duke, who cited him among several candidates who he implied would be harmful to Democrats in a tweet earlier this month.

“Keith Ellison, Sally Boynton Brown or Jehmu Greene would all be excellent choices,” Duke said, referring to two other DNC chair candidates. Brown, who is white, has become infamous for remarks she made at a DNC debate about the party chair's job sometimes being to “shut down other white people.”

But Duke singled out Ellison, apparently because, like Anglin, the former Klansman perceived the Minnesota congressman as being anti-Semitic: “I really like Keith though . . . I mean, at least he knows.”

Such comments are certain to offend Democrats of all stripes, whether they support Ellison or another candidate. But they are nonetheless being passed around among party activists as Democratic leaders meet this week. How influential they end up being is yet to be determined.

Such critiques might backfire, since many Democrats may come to agree with Mother Jones, which recently claimed in a headline that "Keith Ellison is everything Republicans thought Obama was. Maybe he's just what Democrats need."