Will Trump and Bannon drag us into another big ground war? It could happen sooner than we think

Our president wants to "knock the hell out of ISIS" and "take the oil"; his key adviser longs for World War III 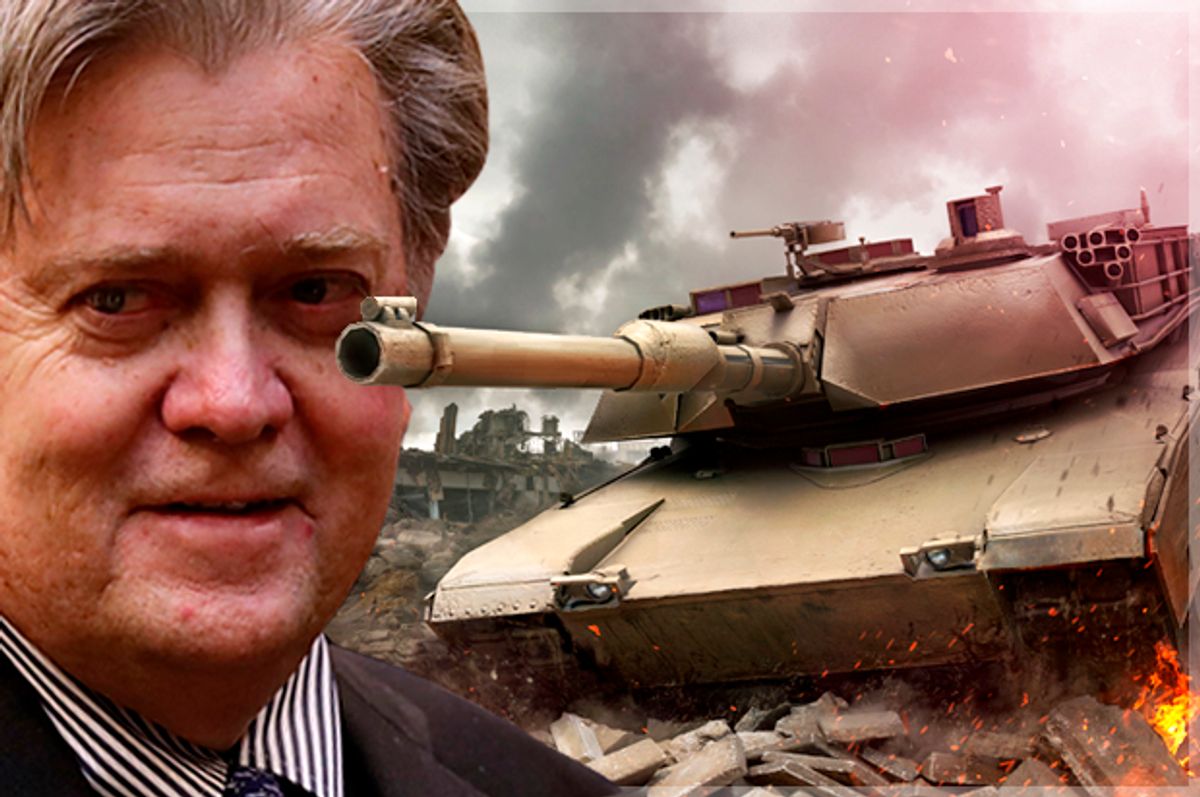 On Wednesday NBC News released a poll reporting that 66 percent of Americans surveyed were worried that the United States will become involved in another war. One might think that's surprising since President Donald Trump has famously been portrayed as an old-school isolationist, an image mostly based upon his lies about not supporting the Iraq War and his adoption of the pre-World War II isolationist slogan "America First."

As I laid out for Salon a few weeks ago, that assumption is wrong. Trump is anything but an isolationist. He's not much on alliances, preferring to strong-arm other nations into supporting the U.S. "for their own good." But if they are willing to cough up some protection money, he might agree to fulfill our treaty obligations. His adoption of the phrase "America First" reflects his belief that the U.S. must be No. 1, not that it should withdraw from the world.

In other words, while Trump has no interest in perpetuating the global security system under which the world has lived since the dawn of the nuclear age, that's not because he believes it hasn't worked. He doesn't know what it does, how it came to be or why it exists. He simply believes other countries are failing to pay proper respect and he is aiming to make sure they understand that America isn't just great again; it's the greatest.

This has nothing to do with American exceptionalism. Trump is happy to admit that American pretenses to moral leadership are hypocritical, and he's openly contemptuous of anyone who believes that the U.S. should try harder to live up to its ideals. If you want to understand what Trump believes, "to the victor goes the spoils" pretty much covers it. He means it in terms of his family, which continues to merge the presidency into its company brand all over the world, and he means it in terms of the United States, believing that this is the richest and most powerful nation on Earth and we can take whatever we want.

One of his goals is to "defeat ISIS." And when he says defeat, he means to do whatever it takes to ensure it does not exist anymore. That does seem like a nice idea. After all, ISIS is an antediluvian, authoritarian death cult and the world would be better off without it. The question, of course, has always been how to accomplish such a thing.

Thoughtful people rationally understand that "defeating" radical extremism of any kind isn't a matter of killing all the people. Indeed, the more extremists you kill, the more extremists you tend to create. But while Trump simply sees the world by playground rules, his consigliere Steve Bannon sees the threat of ISIS as a preordained apocalyptic confrontation between Western countries and the Muslim world. In a notorious speech he gave at the Vatican in 2014, Bannon put it this way:

We’re at the very beginning stages of a very brutal and bloody conflict . . . to fight for our beliefs against this new barbarity that’s starting, that will completely eradicate everything that we’ve been bequeathed over the last 2,000, 2,500 years.

He has called Trump his "blunt instrument" to bring about this global conflagration. Bannon is now a member of the National Security Council and is said to be running a parallel national security agency called the Strategic Initiatives Group, which he has stacked with kooks who share his views. He is a powerful influence.

Trump has promised to take the gloves off, and I think we all know exactly what he meant by that. He said it many times during the campaign: He favors torture. And he reiterated it just last month in his interview with ABC's David Muir saying, "When ISIS is doing things that nobody has ever heard of since medieval times, would I feel strongly about waterboarding? As far as I'm concerned, we have to fight fire with fire."

And Trump went on to grudgingly promise that he would listen to the secretary of defense and hold back on torture if that was his recommendation. But Trump also claimed that he's talked to people at the highest levels of the intelligence community who told him that torture works like a charm. So we will have to see if the president is really able to restrain himself. (His CIA chief, Mike Pompeo, has been all for it in the past. Maybe they'll simply decide to leave Defense Secretary Jim Mattis out of the loop.)

But what about Trump's promises to "bomb the shit out of 'em" and "take the oil?" What about Bannon's desire to bring on WorldWar III? Will that really happen? It might, and sooner than we think.

More American troops may be needed in Syria to speed the campaign against the Islamic State, the top United States commander for the Middle East said on Wednesday.

“I am very concerned about maintaining momentum,” Gen. Joseph L. Votel, the head of the United States Central Command, told reporters accompanying him on a trip to the region.

“It could be that we take on a larger burden ourselves,” he added. “That’s an option.”

Despite his unfounded reputation for isolationism, it's obvious that Trump is itching for a war. Responding to a debate question about whether he would follow a military commander's advice to put troops on the ground, Trump said, "We really have no choice; we have to knock out ISIS. We have to knock the hell out of them." When asked how many troops he thought might be needed, he replied that the number he had heard was 20,000 to 30,000.

Nobody thought much of Trump's bluster at the time. But now he's in the White House with an apocalyptic crackpot whispering in his ear and generals on the ground talking about taking on "a larger burden." Whether his administration's military advisers, Defense Secretary Mattis and his newly installed national security adviser, Gen. H.R. McMaster, are as eager for this battle remains to be seen. But it appears that the two-thirds of Americans who are worried that we'll be dragged into another war are anxious for good reason.