Alt-right is a left-wing plot, say some conservatives — but they can't run from it forever 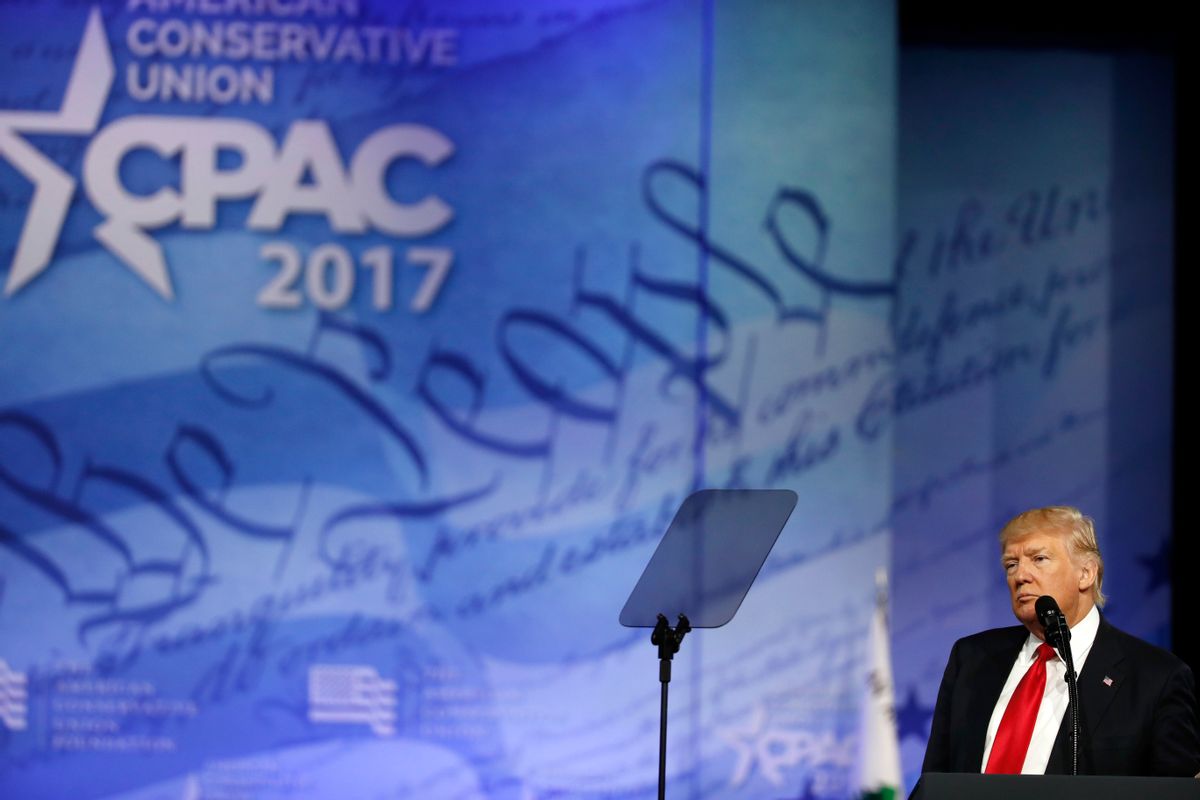 Salon reporter Matthew Sheffield formerly worked as an IT consultant for the American Conservative Union, the sponsor of the Conservative Political Action Conference. He has no current relationship with either entity.

On Thursday one of the top officials behind the organization that puts together the annual Conservative Political Action Conference gave a speech in which he emphatically denounced the growing “alt-right” movement and then implied that it was somehow the work of liberals.

In one of the very first addresses to the conference, Dan Schneider, executive chairman of the American Conservative Union, denounced the far-right movement as a “sinister organization that is trying to worm its way into our ranks.”

All true statements. But then the American Conservative Union chairman went off into the zone of alternative facts as he continued to describe the alt-right as “nothing but garden-variety, left-wing fascists.”

Schneider justified the epithets by saying the right side of the political spectrum believes in “more individual freedom and liberty and less-intrusive government,” whereas those on the left believe in “bigger, more intrusive government” and less freedom.

As it turns out, there are plenty of mainstream conservatives who appear to believe that the rise of the alt-right is actually a left-wing plot.

Immediately following Schneider’s remarks, conservative pundit Deneen Borelli told the audience that “the left will do anything to tag conservatives as racist.”

During the just-concluded presidential campaign, popular talk radio host Sean Hannity claimed to have never heard of the alt-right. He implied that the whole thing was just a strategy cooked up by strategists for Democratic candidate Hillary Clinton:

What is this alt-right thing that they’ve come up with? A new name to describe anybody that’s a conservative who actually believes we ought to have borders?

Hannity has stuck to this line of thought since Donald Trump’s victory. In December, he tweeted, “I never heard of ‘Alt right’ till the middle of the election.”

Plenty of grassroots conservatives appear to think the same thing. Here's one example drawn from the comments on The Washington Times’ coverage of Schneider’s remarks, but many expressions of this nature can be found with minimal research:

Other conservative commentators are willing to admit that the alt-right isn’t entirely a left-wing creation, but they're eager to fault mainstream and liberal journalists who they believe are empowering the movement by obsessively covering it.

Responding to Schneider’s CPAC address and the American Conservative Union's decision to disinvite professional troll Milo Yiannopoulos from speaking, Emily Jashinsky, a conservative columnist for the Washington Examiner, didn’t seem to agree that the alt-right was a leftist movement. She did suggest that liberals were being unfair by pointing out the true origins of the insurgency:

While many on the Left work to align mainstream conservatism with the alt-right, the more movement institutions categorically condemn it, the more difficult their work will be.

It would be easy for conservatives to stay silent and allow the Left and the alt-right to muddy the waters of the movement — and with its initial invitation to Yiannopoulos, that's exactly what many conservatives feared the ACU had done.

I asked Jashinsky via email whether she could name any instances of left-leaning journalists unfairly implying that regular conservatives were alt-right. She did not respond.

David Reaboi, a conservative national security analyst who has been openly critical of the alt-right, told me that mainstream conservatives bear much of the blame for the growth of white nationalism within their ranks. He also said that mainstream and left-leaning journalists have undoubtedly been helpful in swelling the racists’ ranks.

“You know what else isn't going to work?” Reaboi wrote by email. “The moron reporters who cover and amplify every fart of [the alt-right]. These BuzzFeed, Tablet and Daily Beast twits may as well be on the AltRight payroll. . . . This amplification has got to stop; it undermines any effort to combat them.”

There might be some validity to that critique. In psychology, there’s a term called the “observer effect,” which refers to how sometimes observing people’s behaviors can change them. Something like that certainly exists within the realm of journalism. That said, even if journalists refused to cover the alt-right, there’s no question that it is a real and growing political phenomenon that exists in large measure because American conservatism has become ideologically frozen in amber and essentially useless to anyone who was born after 1970.

Refusing to admit this may be comforting or politically useful for those in the mainstream right in the short term. But this denial of reality cannot be good for their prospects in the long run.

“I don't think anyone in the movement at large is fully ready or even aware as to what extent the alt-right has influence in the conservative movement,” one long-time conservative activist told me.

That statement is even more true about the conservative grassroots than it is about the Trump White House. Many journalists have tried to scrutinize every jot and tittle of past writings and monologues delivered by the president’s top adviser, Steve Bannon, who once said that he wanted to make the website Breitbart News he ran into “the platform for the alt-right.”

A mini drama that happened almost immediately after Schneider's denunciation of the alt-right illustrates this reality. As Richard Spencer, the publicity hound and white nationalist who frequently portrays himself as the leader of the movement, emerged from the CPAC ballroom where he had watched the speech, he soon found himself surrounded by admirers, including one who called him "the coolest guy." Spencer was also jeered and eventually ejected by the event's security staff, but he found more than a few fans in the crowd.

The alt-right is growing the fastest among young grassroots right-wingers who have little or no regard for conventional Reagan-era conservatism. Rod Dreher, an author and columnist at the American Conservative (and a friend of mine), has been one of only a few mainstream right-leaning figures who have been willing to admit this. Last week he published an email from a reader who told him that the Christian high school he attends is filled with kids who love the alt-right:

As someone who’s seeing the rise of Milo’s ideals specifically in teenagers raised in a conservative context in my Christian high school, I feel like I have a perspective that you don’t.

Milo isn’t getting conservative ideas out there in a subversive label that’s appealing to Millenials. He’s a prophet of the deeply un-conservative alt-right. He’s not creating a climate that’s accepting of conservative ideals. He’s creating one that specifically rejects those values as hallmarks of a system that they view as a failure through not being radical enough.

That’s why all the good little Christians at my high school are falling in behind him — not because they actually give a crap about conservatism but because he’s giving angry, aimless young men whose church hasn’t given them anything solid to fall back on an alternate source of values that happens to be steeped in fascist and white supremacist ideals. It’s just as absorbed in identity politics as any social-justice movement on the left is, except focused on white men and not LGBT people.

It has swallowed up most of the guys in the senior class at my school, and I’m tired of it. You can’t just not talk about politics with them, because everything is politics to them. Every discussion devolves into things like which girls are “feminazis,” celebrities dating outside their ethnicity being “white genocide,” and so on. It’s suffocating to feel like if you say “actually, that’s really racist” you’re going to be brushed off as some liberal or a cuckservative. I’m genuinely scared that it’s going to spread to the point where I won’t have anyone I can talk to like a normal human being. This isn’t hyperbole.

This radicalization process is something that become very real for conservatives as they’ve created a separate media ecosystem that is almost hermetically sealed off from the rest of the population. As I’ve written before in greater detail, conservative elites have literally spent decades telling their readers, listeners and viewers that the only reason the federal government hasn’t been drowned in the bathtub or that abortion hasn’t become totally criminalized is that conservatives have not been radical enough. The alt-right is the inevitable result of this asymptotic nihilism.

Much of the Washington conservative establishment also still hasn’t figured out that Donald Trump’s victory in the Republican primaries last year, which most of them found horrifying, was made possible by the GOP’s refusal even to consider issues like income inequality and racial injustice. The many decades that conservatives have spent downplaying or pretending that such things don’t exist or claiming that government can’t help alleviate them is also a huge reason why racial minorities have become almost uniformly Democratic voters. If some significant percentage of Hispanics supported Republicans, it's a safe bet the GOP wouldn’t be so obsessed with illegal immigration as an issue.

If conservatives don’t want to have their political party taken over by white nationalists, they’re going to have to do a lot more than just denounce them in conference speeches.