Filmmaker behind Trump's Sweden comments defends himself: "There is a massive social cost" to Muslim immigration 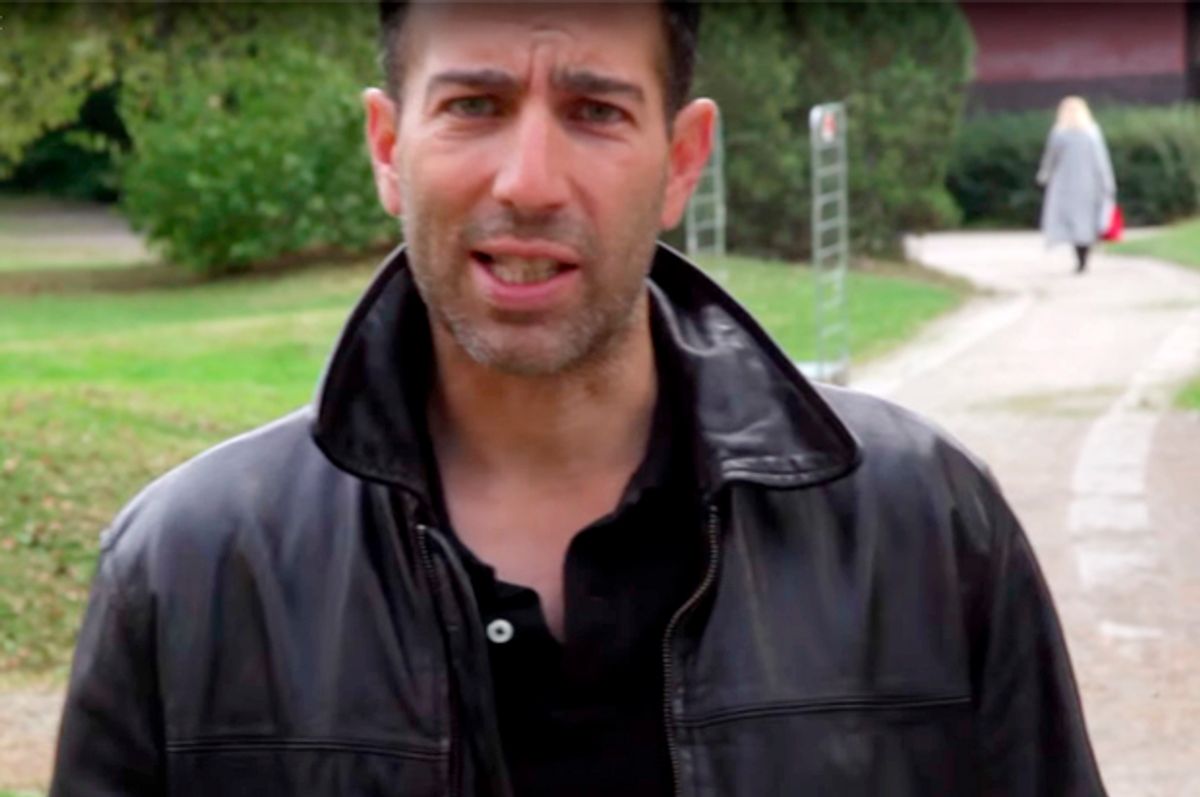 President Donald Trump’s comments and tweets about Sweden have caused quite a stir. Until now, the source of his provocative assertions, filmmaker Ami Horowitz, hasn’t commented in depth, although he has appeared as a squawking head on Fox and CNN. (He has decried The New York Times for stating that he didn’t respond to a reporter for the paper’s story about the Swedish affair. He has claimed that he never was contacted.)

The investment banker turned filmmaker, who lives in New York, has styled himself as a satirist, something like a conservative Michael Moore. His first feature film, a critique of the United Nations, was titled “U.N. Me,” a sly reference to Moore’s “Roger & Me.”

Trump’s original reference was to a Fox News segment in which Tucker Carlson interviewed Horowitz and showed clips from his short film “Stockholm Syndrome,” which asserts a hotly contested connection between a purported rise in violence in Sweden and the influx of immigrants.

During the interview, Horowitz said, “Sweden had its first Islamic terrorist attack not that long ago, so they are now getting a taste of what we’ve been seeing across Europe already." It appeared to many that the only attack he could have been referring to happened in 2010, when an Iraqi-born Swede blew himself up with a pipe bomb. So when Horowitz said Sweden was “now getting a taste” of what the rest of Europe has experienced — the wave of terrorist attacks that occurred in 2015 to 2016 — he was flipping the sequence of events and therefore incorrect.

Horowitz has now said he was actually talking about an arson attack in October in Malmö that caused smoke damage to a Shiite Muslim community center. But although ISIS claimed a connection to the crime, Sweden doesn’t consider it an attack of terrorism. Horowitz disagreed: “That was a pretty clear act of terrorism.”

In his film, while showing a bombing that appears to be the Stockholm incident more than six years ago, Horowitz says, "Sweden has seen dozens of those people gone to fight for ISIS and they are starting to come back. Sweden has had its first Islamic terrorist attack.”

This would seem to imply that the bombing was a more recent event and the attacker was someone who went overseas to fight for ISIS and came back. Neither is true. Horowitz agrees that this sequence could be misleading. He has said that if he did it again, he would “clean up” that part.

Either way, Horowitz seems to be on the same wavelength as the president. Earlier this month the Trump administration released a list of 78 unreported terrorist attacks that included the arson in Malmö. While the mainstream press and the Swedish government have struggled to make sense of Trump’s Swedish statement, from Horowitz's point of view the president was on message.

As Horowitz was rushing between media interviews, he responded to a series of email questions. His responses have been lightly edited for style but not altered in any material way.

Did the Trump administration contact [you], either before or after the president referenced your film, in order to verify the facts as you present them?

They have not contacted me.

Are you surprised? Do you think they should?

I am not surprised. Why would they want to reach out to me? I am just a lowly filmmaker.

It's pretty clear that Fox News has been in touch with you.

Yes, I am in contact with the people that I work with at Fox. They seem to be happy with the traction the story is getting.

Can you provide sources or links for the spike in crime, and rape in particular, that you allege in Sweden? The State Department has indicated a decline in serious crimes in Sweden, and an increase in vandalism and computer fraud. The murder rate in Sweden is ridiculously low, no? [Around one murder per 100,000 people, roughly one-fifth the typical U.S. murder rate.] And it hasn’t gone up. According to Sweden’s own reporting, crime is pretty much flat, no?

So to say crime in general is flat is misleading; heavy crimes, which I am defining as murder and rape are all up. According to BRA, the official crime stat keeper of Sweden, sexual assault has gone up almost 50 percent over the last nine years and has gone up every year since 2006. It went down only one year between 2014 and 2015. To simply point to that year to make a general statement about sexual assault trends is disingenuous.

It is also wrong to point out that the definition of rape has been expanded and that is the cause for the increase (which by the way contradicts their statement that rape is down). The definition was changed in 2005, the increases that I am showing [are] after the change was instituted.

Not to give it short shrift but murder is up 65 percent since 2012. The rise in these stats also come at a time where these same stats in the U.S. and Western Europe have plummeted, giving the rise we have seen in Sweden even more relative statistical heft.

What do you think of President Trump and Steve Bannon’s claims that the media is the "opposition party" and the enemy of the American people?

Obviously the media is an important part of the American system and I think it doesn’t serve a purpose to just throw bombs. But it is also important to keep the media honest and they could learn a thing or two about where we are as a country from the political earthquake in November.

In a recent tweet, you said that everyone was “missing the point” in the coverage of Trump’s statement about Sweden. What did you mean by that?

Because Trump speaks in a hyperbolic shorthand, the media, not necessarily wrongly, focuses on his misstatement and not the reality of the situation. The reality is that there is a massive social cost to Sweden’s lovely humanitarian gesture.

As a satirist, is your goal to educate or entertain your audience?

I like to jump in between worlds, the satirical and the serious. But even when you are doing a serious immersive piece, like I did with Sweden, you always want to entertain the audience in order to keep them watching. That is why I have a very high YouTube retention rate, even on a longer-form video.

What’s it like on a personal level to be at the center of this maelstrom?

It’s a trip for sure. This is a controversy of literally global proportions. And to be in the center of it is pretty cool. When you are shooting a video you can’t conceive that your work is going to have geopolitical implications. You always have different people with differing points of view. For example, you have the guys for whom I am doing God’s work (for the record I happen to side with them) and there are the haters who think I am Trump’s Svengali and puppet master (see Slate). Then you have my kids, who saw my face pop up on the “Today” show, looked up briefly and then continued to stuff their face with cereal.

The terrorist attack represented at the end of your film is narrated with your words, "Sweden has had its first Islamist terrorist attack." But no context is offered. There is no description of the event or even the date. Was that a creative decision? It seems open to misunderstanding.

Was the film commissioned by Fox News? Can you characterize your relationship with Fox and the creative freedom you had to make the film?

I have my own production company and I develop my own stories and produce my own videos. I have a good relationship with Fox News and they always publicize and distribute my work, for which of course I am grateful.

You assert that Swedish police have told you that a majority of rape assailants are immigrants. Can you provide a source or statistical evidence?

Unfortunately it is impossible to obtain stats on exactly what the backgrounds are of the perpetrators of these crimes because Sweden has purged this information from the statistical record. A number of years ago they did keep these stats, but have since erased them from their statistical record keeping.

Having said that, I have had numerous conversations with police officers off camera who have said unequivocally that a majority of the people they have arrested and investigated are people from majority Islamic countries. When sexual assaults have made the news, such as the rash of assaults at music festivals, the perpetrators have more often than not been Muslim.

Couple that with the rise in immigration essentially mirroring the rise in the violent crime stats (murder and rape) and the lack of any other demographic change or even a plausible theory on what could have led to this increase in these type of crimes [and] the argument seems pretty solid.

Additionally, and maybe most notably, according to BRA, “In 63 percent of the cases, the perpetrator was completely unknown to the victim.” This is almost the mirror opposite of the statistic in the United States, a country where no one makes the argument that Islamic immigration is leading to a comparable rise in crime.

In your Fox interview with Tucker Carlson, you said that there is a "policy of the national police authority” not to enter these supposed "no-go" immigrant zones. Again, can you verify that or provide a source?

The policemen in my video were the ones that used those words to describe numerous Islamic enclaves in which, according to the police, they are not allowed to enter unless they have heavy convoys using military tactics. In my video I show a police station in Rinkeby [a neighborhood in Stockholm], one of the more well-known enclaves, in which the police station was moved because of rising violence against police. There are also numerous articles in Swedish papers that use those words and attest to the fact these “no-go zones” are not a fiction of the conservative mind but a policy of the police.

Those two policemen in your video look awfully casual. They're not in uniform, for one thing. What's up with that?

Those two police officers often deal with informants and other undercover police working those areas. Everyone in their “secret” location in a nondescript office complex [was] dressed casually.

One of your sources, the police officer Anders Göranzon, has claimed you used answers to different questions and manipulated his and his partner's comments. He also called you a "madman." What do you say to that?

They are both courageous police officers who are doing an incredible service to their community. I can only imagine how much pressure that they must be under by their bosses after this controversy broke.

All I can say is that everything they said was in context and portrayed accurately. They used the words ”no-go zone,” described the rise in violence as “more violence and harder violence,” the difficulty they face in being labeled a racist.

I have been making films and videos for 10 years and I have made dozens of them, many of them have been very high-profile. I have never even been accused by any of my subjects of manipulating footage. I take my duty as a filmmaker and the trust my audience puts in me very seriously.