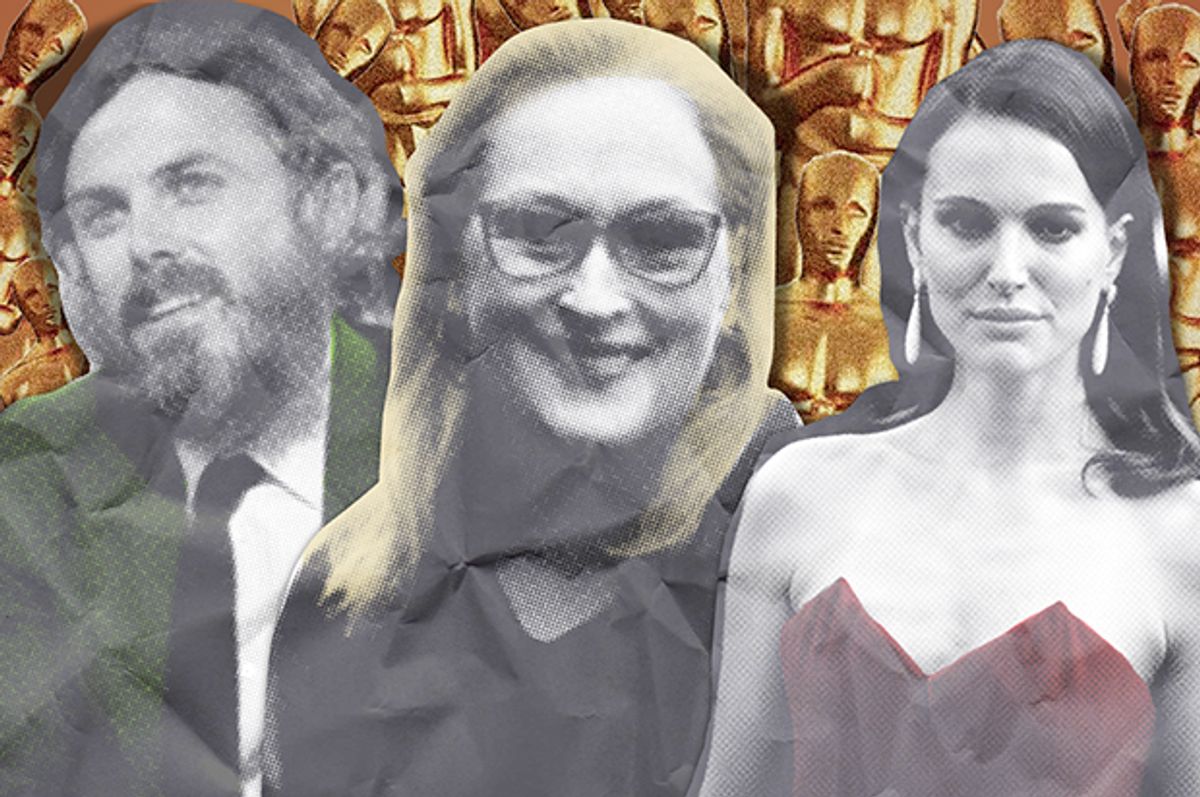 This year’s award-season speeches, capped by Ashton Kutcher’s fertile Screen Actors Guild cry “We are all immigrants at airports!” indicate that the 790th annual Academy Awards will burn down all the barns. The Oscars are poised to be the most political awards ceremony since Robert Redford streaked naked past a Native American who was refusing to accept Marlon Brando’s award for best actor in a film about forced-butter butt sex.

I, dubbed by "Vanity Fair" and "Breitbart Hollywood" as “the Rex Reed of Central Texas,” have received draft copies of the nominees’ Oscar acceptance speeches. Would you like to see them? Well, here are some choice quotes anyway:

“I dedicate this award to all the women who have suffered silently as the victims of sexual harassment and violence. It is the world’s greatest shame, and we must do everything we can to punish the perpetrators of these crimes. They must be denied a voice. They can never be honored.”
—Casey Affleck

“Tonight I speak for the rights of all animals. We must stop eating them if we are to retain our humanity. This was taught to me by the novelist Jonathan Safran Foer. I wait at the window for him, wearing only a men’s dress shirt and panties, hoping he will soon hand deliver me another letter of wisdom.”
—Natalie Portman

“We must do everything we can as a society to preserve our most precious American art form: jazz. I hold this golden statue aloft to honor the thousands of nameless black heroin addicts who played the music and then died so I could have two white actors tap dance clumsily on the ceiling of the Griffith Park Observatory. Salt peanuts! Salt peanuts!”
—Damien Chazelle

“We are all just travelers in this interstellar journey we call reality anyway.  It’ll be good if you are good. As a Zen roshi told me one time in Malibu: This is the time to open your heart to dreaming.”
—Jeff Bridges

“I think we should all give President Trump a chance to . . . wait, what are you doing? Is that a stun gun? Please, I take it back. Stop hurting me.”
—Nicole Kidman

“The People’s Revolutionary Front of Hollywood is issuing the following claim: We are dedicated to armed struggle against the masters of capitalism and their jackbooted police pigs. In alliance with our brothers and sisters in the global antifa, we will destroy the Nazi Bannon by any means necessary. Death to the fascist insect that preys upon the life of the people!”
—Denzel Washington

“You motherfucker! I am going to fuck you! You’re going to regret you ever did this to me! I own Malibu and will spend all my own money to get even with you. Fucking Jews. The Jews are responsible for all the wars in the world. Are you a Jew?”
—Mel Gibson

“We must seal off our borders to protect us from the illegal immigrant criminals who are plaguing our communities. We must give law enforcement unlimited power to prevent our inner cities from becoming hellholes. The media are the enemy of the people and I will grab them by the pussy. Join me. Together we can make America great again! Also, I still hate football.”
—Meryl Streep