"Because it's fear, after all, that kills us": Tori Amos released "Little Earthquakes" 25 years ago today

Based upon solo piano compositions, the album's power radiates from Amos' commitment to her own musical vision 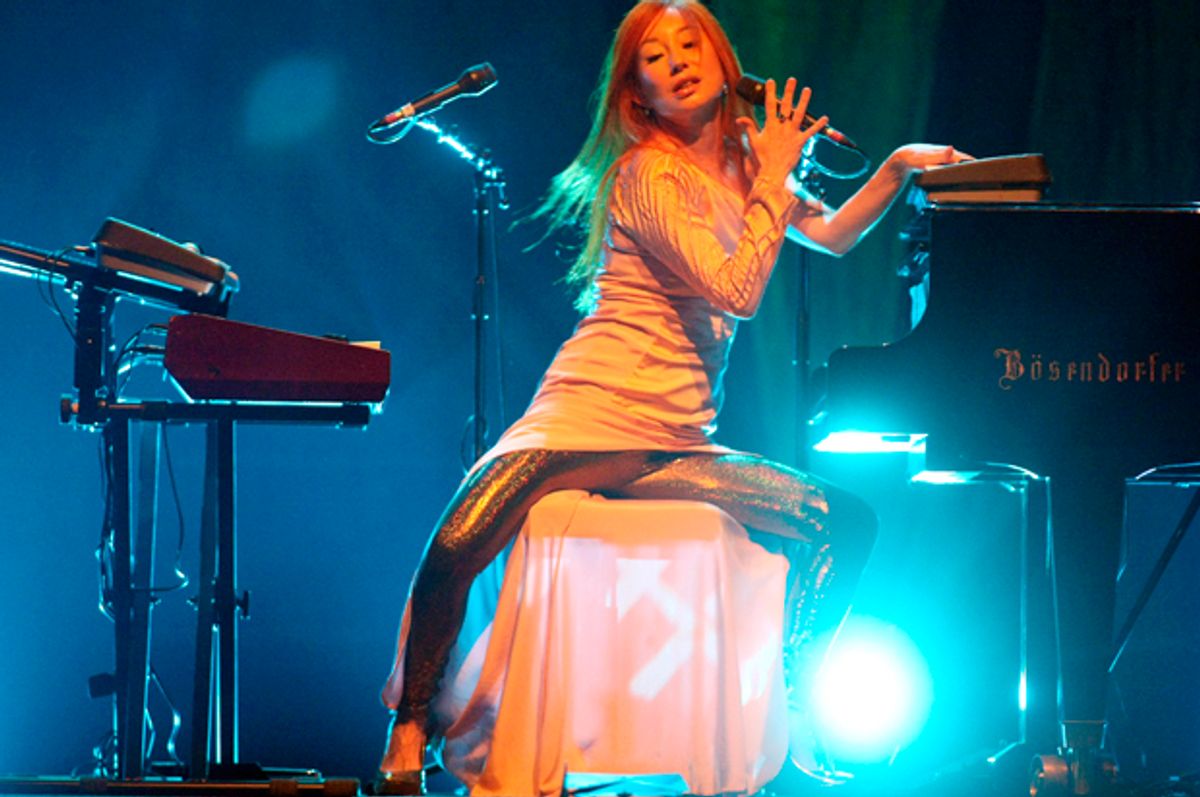 Milan Fashion Week kicked off Feb. 22 with a Gucci runway show featuring "enchanted garden-inspired looks." In practice, Reuters reports this translates to models "covering themselves with wide parasols, carrying arrows, wearing glitter leggings [and] long ruffled and flowered dresses," among other things. Appropriately, the entertainment for the Gucci after-party was someone familiar with the confluence of absurdity, majesty and whimsy: Tori Amos.

Attendee-shot video from the event depicts the fire-haired pianist playing "Silent All These Years" while a steady din of conversation buzzes around her. Amos doesn't seem to mind, however. She hunches at the keys dramatically, as if playing in a grand concert hall rather than at a crowded party, and meticulously stretches out the vocal syllables of the first verse. In another video, Amos looks like she's lost in her own private universe as she picks out a grand and delicate instrumental interlude.

Choosing to perform "Silent All These Years" in front of a potentially indifferent crowd was an act of subtle subversion. The song, which Amos said on a late '90s episode of "VH1 Storytellers" was potentially written for Al Stewart, of all people, is about beating back oppression and suppression, and realizing one's voice possesses power and strength. In other words, it's a mission statement of sorts for her entire career.

"[My niece Cody] loved fairytales and stories, and we would share the 'Little Mermaid' story — Hans Christian Andersen and the idea that she'd lost her voice — and watching Cody respond to this young woman giving up her essence and power, all for something else," Amos recalled to Rolling Stone in 2009, in a piece detailing the origins of the song. "And in that moment, I realized that when she had no voice, that just completely took me to the place where I needed to go to reclaim it."

Reclamation is also a major theme of "Little Earthquakes," which was released on Feb. 25, 1992, in the U.S. and contains "Silent All These Years." "She's been everybody else's girl/ Maybe one day she'll be her own," Amos wails on "Girl," as synthesized strings dart back and forth over twinkling piano. The protagonist of "Crucify" is tired of figuratively self-immolating, acting against her best interests or chasing after the wrong guy: "Every day I crucify myself/And my heart is sick of being in chains." And on the slow-burning title track, Amos repeatedly shrieks "I can't reach you," ostensibly to a romantic partner. However, the phrase could easily be directed inward, as she then murmurs "Give me life/ Give me pain/ Give me myself again."

Amos is generally kind to her younger self throughout this journey of self-discovery, however. On "Winter," she employs fairy tale-esque imagery and several benevolent narrators to function as her conscience. "Sleeping beauty trips me with a frown/ I hear a voice: 'You must learn to stand up for yourself/ Cause I can't always be around,'" she says, while the chorus is simple and devastating: "He says, 'When you gonna make up your mind?/ When you gonna love you as much as I do?'" Implying that self-esteem is a choice — that someone doesn't have to wallow in self-loathing or past indiscretions — is powerful and freeing.

"Little Earthquakes" also draws its power from Amos' commitment to preserving her own musical vision, one based around solo piano compositions. This wasn't necessarily easy. A large portion of the album was recorded in 1990 in Los Angeles, but her record label wasn't thrilled with all of the results. "They sort of pulled a Linda Blair," co-producer Eric Rosse told Keyboard in 1992. "They came back and said 'What’s this?' to this beautiful work." Amos and Rosse then hunkered down in the latter's studio and came up with more songs.

One of the tunes from this session, "Precious Things," especially reflects deep inner determination. The song begins with galloping piano chords and a panting sound, as if someone is out of breath after a long run. Amos then proceeds to detail things she once put up with — "He said you're really an ugly girl/ But I like the way you play/ And I died/ But I thanked him" — and what she'll no longer tolerate. "These precious things/ Let them break their hold over me," she intones, a promise in her voice. The chorus is a roaring reckoning, a brick wall being smashed, with thundering piano chords, booming drums, snaggle-toothed electric guitar and an agonizing, wordless wail from Amos.

Later sessions in England with producer Ian Stanley led to songs on the opposite end of the dynamics spectrum. The intimate "China" places Amos' conspiratorial vocals in the forefront, as strings and oboe bob and swell in the background. And Amos chooses to sing the stunning "Me and a Gun," a harrowing song about her real-life rape, a cappella. With her wounded-but-confident delivery standing on its own, sans musical adornment, the song is perhaps the record's strongest statement of all.

Technically, turning to solo piano for solace was nothing new for Amos, a classically trained musician who honed her skills playing in hotel bars for years before breaking through. However, Amos had set aside her passion for the instrument to front the unsuccessful, late '80s pop-metal act Y Kant Tori Read. That band imploded due to poor sales of its 1988 self-titled debut, and she was emotionally destroyed.

In the aftermath of this shattering failure, Amos went over to a friend's house and played piano for hours, she told Rolling Stone in 1994. "[My friend] said to me, 'Tori, this instrument is crying without you, and you're a mess without it. This is what you are. It's not about [the fact that] nobody thinks it's cool. You've done everything else, and look what they think of that.'" Speaking to Musician in 1992, Amos described the galvanizing process of rediscovering this side of herself: "When I started playing piano again, it was like I remembered who I was. I found myself again."

Knowing this, it's no wonder Amos was so fiercely protective of "Little Earthquakes," and kept this self-empowered feeling close while fighting for its direction. "At first the boss of my American record company hated 'Little Earthquakes,'" she told Nieuwe Revu in 1994. "Half of the staff hoped I'd be a white Neneh Cherry, the other half wanted to make me into a female Elton John. It took a long time before they wanted to accept who I was, and realize I could make them money that way."

Amos' belief that her musical direction was correct and would resonate with other people has helped "Little Earthquakes" evolve gracefully. The straightforward way she acknowledges losing (and then rediscovering) herself is forceful and familiar, and transcends time and age. "Little Earthquakes" is an empowering blueprint for people who feel like they've become subsumed by day-to-day life — the 9-to-5 grind, a relationship, parenthood, demands from other people — and stifled their own desires.

But for women especially, the way Amos speaks about her own experiences with men, relationships, her career and even other women remains deeply inspiring. She acknowledges how easy it is for women to lose their sense of self — so subtly that it's often gone before they even realize it — and recognizes that inner strength and vulnerability can coexist.

Above all, on "Little Earthquakes," Amos is no longer afraid of being herself, or expressing exactly how she's going to live her life going forward. "These songs demanded to be written," Amos told Musician in 1992. They are what they wanted to be. I wouldn't allow fear to get in the way. Because it's fear, after all, that kills us."